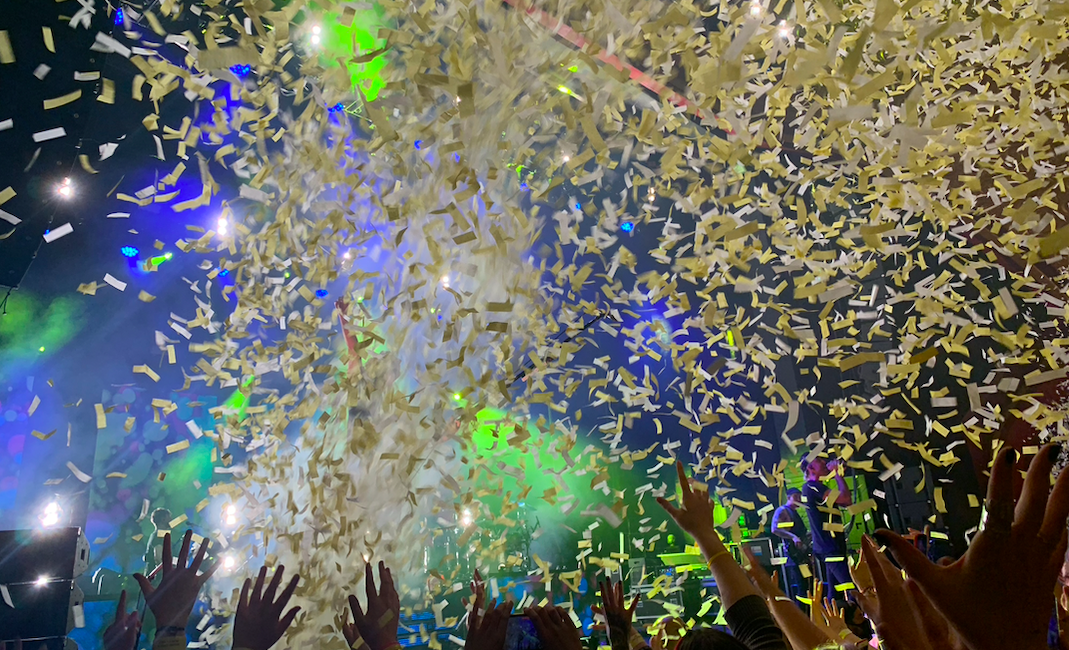 After cementing their status as pop-punk legends over the last year, All Time Low bring a victorious show to the UK for one big party. They’ve always been famed for the irreverent fun of their gigs, but through one stunning album (Wake Up Sunshine), a single that celebrates everywhere they’ve been and promises where they’re going (Once In A Lifetime), and a single that locks them into the future of pop-punk (PMA with Pale Waves’ Heather Baron Gracie), they’ve rolled the lot into a show that manages to encapsulate their trademark chaos, and recognise their 20 years of development.

But before we get started, it’s only fitting that All Time Low treat us to the future of pop-punk in support-artist-form: Meet Me @ The Altar kick things off tonight, and they do so with a big, big bang. Their sound, totally classic on record and laden with chunky riffs, heavy bass and golden hooks, is just the same on the stage of the Manchester Apollo – but something about it feels so fresh, nonetheless. Cuts from latest EP Model Citizen go down a storm, and it’s clear it won’t be long till MM@TA are selling out these kinds of venues too. And up next, The Maine have long been pop-punk singalong favourites, and they prove why in a set blending old gems with their moodier, newer stylings, getting the audience voices well warmed up for the hour and a half of yelling that’s about to ensue.

For a while now, All Time Low’s back catalogue has been jostling for setlist space, and today is no different. The majority of tonight’s tuneage is picked from last year’s Wake Up Sunshine!, and until the band walk onstage, it’s easy to forget that this is one of the first times we’re hearing these songs live – glorious opener Some Kind Of Disaster has had a smattering of plays, and is a bright note to open on, but the likes of runaway chart success Monsters haven’t seen the UK crowds yet. But what a welcome they get, as do Clumsy and Glitter and Crimson. PMA gets a giant singalong, and Once In A Lifetime absolutely comes into its own being belted out by a crowd who are as excited and proud as can be.

And of course, the cuts that survive from All Time Low’s earlier albums are the best of the best, the fan favourites that’ll continue to pepper setlists as long as All Time Low are a touring band. The singalong anthems, the Dear Marias and Backseat Serenades, early highlight Six Feet Under The Stars, the classic euphoria of Weightless – they turn the energy up to ten. And then the emotions catch up when we’re treated to back-to-back Therapy and Missing You. All Time Low give an elated, career-spanning show, maintaining the energy of their beginnings but injecting the whole thing with something new. It feels sacrilegious to refer to All Time Low, famed for their bra-throwing, smart-talking onstage antics, as ‘mature’, but it’s undeniable – they’ve grown, and they’ve grown up, but they’re still just as entertaining.