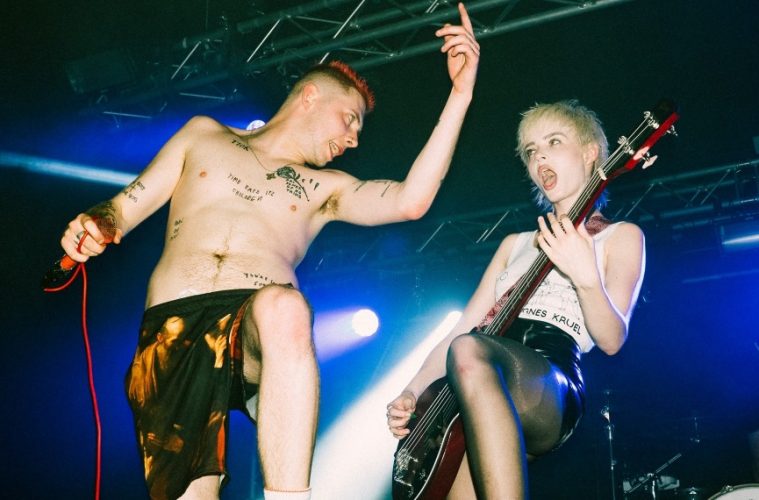 2021 saw a lot of excitement in the music world. We had the monumental return of live music at Download Pilot, which was followed by more amazing shows than we can even count. We had albums and artists that opened up the rock world and challenged what we expect from alternative music. 2021’s music left a pretty sweet taste in our mouths – our Flavours of the Year had a lot to do with that. Today, before unleashing our Flavours of 22, we’re revisiting the artists we’ve spent this year with, and sharing why we ought to stay excited with them.

Kid Brunswick’s year is absolutely defined by fierce forward motion. The build up to his debut album XFOREVER was immense, culminating in one of the first full headline shows of the year – and his first ever headline show. That was followed by a tour with titans Don Broco, which broadened Kid Brunswick’s passionate cult following to the mainstream. Not content with just releasing his debut album, though, Kid Brunswick’s also dropped Stained, which he shared calling it his greatest ever just weeks after XFOREVER, and has closed off the year by teaming up with punk’s fastest rising star Cassyette (spoiler alert for our Flavours of 22…)

We were lucky enough to steal the lovely lads of Weatherstate for a chat at Slam Dunk after their singalong set (luckily unhampered by any broken stages) and they definitely reassured us that good things are coming. Last year saw their Panic Attack EP bring their much-needed, situation-fitting nihilism turn inwards, and rumours of an album on the way next year are drifting around. And there’s no doubt that current events will provide plenty of inspiration for another set of gloomy, great tunes.

Delilah Bon’s best thing she did this year? Releasing a stunning, empowering, fantastic record of brat-punk genre-challenging bangers that showcase her artistry and strength of message? Yep, it could be that… or it could be the fact that she finally managed to do what her Delilah Bon project was born to do: make a melodramatic, viciously vivid Halloween EP as well. In 2021, Lauren Tate (the woman behind Delilah Bon) has been mostly touring with her day band Hands Off Gretel, but could 22 be the year Delilah gets taken to the stage? We hope so.

Meet Me @ The Altar

Meet Me @ The Altar were always going to have a stunning year. After spending 2020 gearing up for breakthrough, 2021 was the year it all came to fruition in their mega Model Citizen EP, a tour with All Time Low, an announcement that they’ll be playing Slam Dunk Festival, a tour in the works with State Champs… They’ve had a hell of a year, and somehow it still feels like they’ve only been laying the foundation for what’s next to come. Their rise has been immense, but they’re still gearing up to go bigger. Album in 22… fingers crossed. But whatever they do, we still can’t take our eyes off them.

Now this one’s really bittersweet. For You The Moon, Slam Dunk Records proteges, are no more. But they had an excellent run in 2021, so we want to give them the love they deserve anyway. Their 2021 singles Talk and eightfortyfive join previous release Lost Without It in demonstrating their knack for a You Me At Six-esque singalong hook and a euphoric melody, which the band showed off to their best at their inaugural Slam Dunk performances in their hometown of Leeds, especially. We’ll miss them, and what could have been, but at least they’re ending on a high.

Crown The King have had a very solid year – making their own selection of pop-punk bangers, teaming up with Lizzy Farrall for a rendition of Fence, and generally making a name for themselves as purveyors of guitar-laden goodness. They’re rolling into 2022 with a lot of energy and an EP on the way that looks set to be every bit as good as what they’ve teased us with so far, well geared up to take the pop-punk reins onwards.

Few people have had a better year than Wargasm. It feels like since their conception they’ve been having a breakthrough so massive that no one could have seen it coming – and yet everyone should have done. From their inception, they’ve been screaming loud. Their Download Pilot set felt like a watershed moment, as they ripped their nu-metal shrieking all over the main stage for a crowd of 10,000 feral rock fans delighted to be back, and it’s not been pause since there. A sold out headline tour, a slew of singles each with more teeth than the last, and no signs of stopping.

The Dead Deads definitely did something loud this year. Their stomping, classic sound was unfolded in wonder on their record Tell Your Girls It’s Alright – an album packed with rage, tenacity, but also something as positive as the title suggests. It actually is alright, and The Dead Deads’ delightful sound has made sure we feel it, even if we’re channelling something darker. The stateside group haven’t given us the chance to have a dance around to their tunes yet, so we’re hoping this is in store in 2021.

Skywalker spent their year making music that absolutely reflects the emotional situation of the world. Their album Late Eternity was a swelling river of catharsis, and saw us through the first half of the year excellently. And now, as we surge into 2022, we’ve got a new single to tip us over the New Year. They’ve got a lot of fire, and we’re hoping we get to see more of it.

Here’s a playlist of all our Flavours of 2021 have been up to this year. Enjoy.