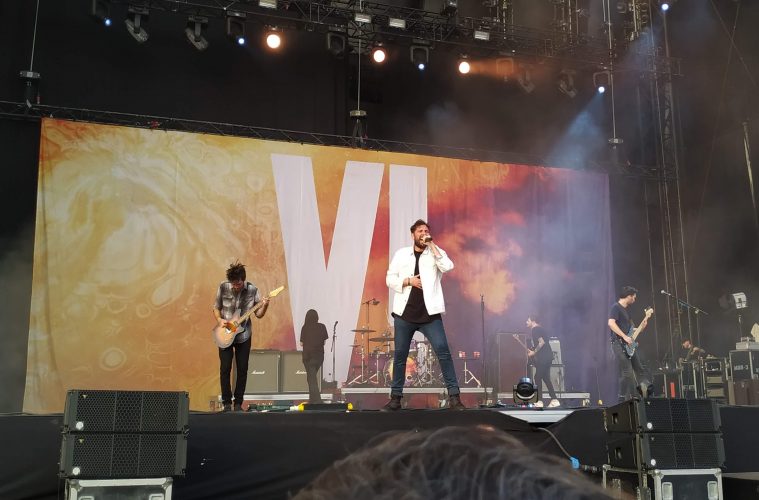 You Me at Six – FIB Benicàssim Festival 2019

It’s five minutes before You Me at Six take the Main Stage, and it’s pretty clear that the Benicàssim crowd have no idea what’s in store for them. A few weeks ago these guys headlined 2000trees festival and played to one of the biggest crowds of the weekend, yet in the Spanish sunshine it’s unbelievably easy to get to the barrier. There’s a fan or two dotted around, but strangely it feels like most people are just hanging around to see what this ‘unknown’ act has to offer… and, of course, these Surrey lads are set on making their mark.

As soon as the guys are out, their affect on the crowd is immediate. Fast Forward blares out of the speakers and people start to gather, the irresistibly cool energy of the song impossible to ignore. Josh Franceschi’s brilliant charisma also does wonders, drawing previously passive onlookers in for a closer listen. By the time Lived a Lie starts, the crowd has more than tripled in size, everybody eager to see what else You Me at Six have to offer.

Fan favourite Underdog has the select fans screaming along, and this excitement is almost a catalyst of enjoyment – seeing the fans sing along passionately has the rest of the crowd buzzing with a new-found energy. The energy is most definitely nothing in comparison to a normal You Me at Six crowd however; the crowd is enthusiastic, but when Franceschi has to REQUEST the formation of a circle pit for Fresh Start Fever, it’s clear that it isn’t quite as raucous as the guys are used to.

Despite the lack of moshing, however, the control that these guys have over the crowd is masterful. By the time the slick and vibey I O U is wrapping up, it’s clear that everyone is gutted to watch them leave, all truly captured by the band’s talent as well as Franceschi’s fabulous stage-presence. It’s a brilliant set, albeit short and much earlier in the day than the band deserve. It’s mad to think that overseas a band can be so unknown, when back home they’re headline acts at festivals like Gunnersville. You Me at Six always put 110% in, no matter where they are on the bill, and it definitely shows.