It’s an early start on Friday, as we’ve got to get to the Cave to see PENGSHUi. We’ve been absolutely addicted to these guys and can’t wait to see them perform – and we’re definitely not disappointed. The grime trio immediately have people bouncing along to their infectious tracks. It’s a set full of violent rap and slick grime, contrasted brilliantly by charismatic Illaman is when interacting with the crowd. He reminds us all to ‘SMILE!’ before closing off the set with ‘No Time’, by which point the entire crowd is moving. Everyone piles out the tent in awe, glad to have woken up early to catch a true hidden gem.

Over on the Main Stage, we’re greeted with one of the biggest early crowds of the weekend for Dream State. We loved these Welsh rockers last year when they played the smaller Axiom stage, but the main stage truly lets them shine. CJ Gilpin is tiny but mighty, screaming and growling to perfection throughout the set. As always, she gets involved with the crowd, coming down to interact with everyone. The whole set is a testament to why these guys draw in so many fans – you can feel that they’re just as excited to be there as you are to see them. 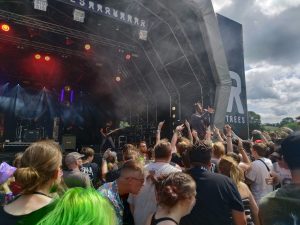 Dream State at the Main Stage

There’s a drastic change of mood over in the forest, however. Whilst crowds at the other stages are moshing and screeching, the calm forest clearing is dotted with crossed-legged fans softly singing along to Robin Skinner’s of Cavetown’s gentle acoustic tracks. Fans grin until their faces hurt, entirely won over by the singer’s loveable demeanour. Skinner praises the forest stage for being such a welcoming space, and it’s clear that the setting matches his vibe perfectly. By the end of the set everyone feels cleansed, tears and laughter having been shared amongst the fans young and old.

After we’ve stopped crying, it’s time to knock some energy back into our systems. Drug Church’s set in The Cave is easily a highlight of the weekend, not just because their music is a clamour of punky madness smashed together with an undercurrent of chaotic fun, but also because their stage presence is so naturally cool. Despite the intensity of the music, frontman Patrick Kindlon is calm and easygoing, and his entertaining crowd interactions are heartily welcomed – as you’d expect, judging by the scores of Drug Church shirts kicking about.

From the coolness and fantastic reception of Drug Church, we make our way over to the main stage for a pre-headline set from As It Is. It seems like they might not quite have hit their demographic with 2000Trees; The crowd is definitely smaller than one might expect from a band playing second to headline. There’s also a much less varied cross-section of festival-goers than other acts have drawn, but those who are there definitely give it their all, as do Patty Walters, decked out in full 2000s emo glory. 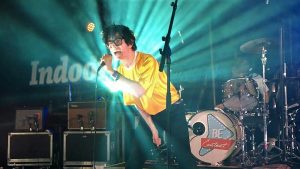 Indoor Pets at the NEU Stage

2000Trees genre-spanning lineup is shown at its best in the NEU Stage – conveniently located so you can catch their headliner and then pop right out to catch the Main Stage one! Indoor Pets, compared to acts like yesterday’s While She Sleeps, sound positively pop, but match the energy of the loudest metal band you can think of, as do their crowd. Jamie Glass performs with the vigour of a puppy dog swinging a guitar around, and the audience respond in kind, shouting back lyrics be they from latest release Being Strange or IP’s earliest EPs.

You Me at Six flawlessly close off the day on the Main Stage, reminding us just how brilliantly Josh Franceschi can command a crowd. People are moshing as soon as opener Fast Forward booms out over the field, eager to soak up the unique energy that a You Me at Six crowd possesses. Franceschi occasionally requests a circle pit here and there, but there’s really no need – it’s Fresh Start Fever, it’s basically a knee-jerk reaction to form a circle pit to that oh-so familiar beat. You Me at Six are a perfect festival headliner, and everyone is loving it. 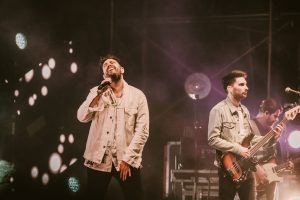 You Me at Six at the Main Stage, shot by Gareth Bull

Covered in sweat and entirely buzzing with energy, people pile away from the You Me at Six set with smiles on their faces. Everyone is on such an emotional high, feeling so alive after a fabulous day of music – and it’s only going to continue when talented acoustic trio Thrill Collins takes control of the Cave for the silent disco! 2000trees really does spoils us.

Meet you on the waltzer at midnight, yeah?

Check out reviews for Thursday and Saturday!
Get yourself tickets for 2000trees 2020 here!