Waking up on the final day of 2000trees is always an upsetting affair – knowing that tomorrow it’s all over, that you’ll have to leave all of the pals you’ve made behind, is terrible. But that also means there’s only one last chance to make the most of what the festival has to offer, so soak it up we shall.

Our first act of the day is Vukovi at the Main Stage, a jump up from their smaller set on the Axiom last year – and, boy, do they put on a show. These Scottish rockers put other acts to shame with their level of enthusiasm, Janine Shilstone’s energy seemingly endless as she screams and dances around the stage. Shilstone’s lovable stage presence results in a crowd that is wrapped around her finger, everyone eager to follow her instructions. This results in a wild circle pit around a man dressed as a fridge (really), as well as her surfing across the crowd on an inflatable dingy. The set is a hilarious riot from start to finish, and we’re absolutely certain everybody left the crowd in awe of these alternative rockers.

Carrying on with the Scottish vibe, we rush over to catch the brutal Lotus Eater. The Cave is absolutely packed for their set, everyone eager to thrash around to the Glaswegian metal crew. They sound just as brilliant live as they do on record, the crowd entirely captured by their harsh, gloomy energy. These guys have received quite a lot of backing from bands recently, be it when While She Sleeps brought their singer on stage on the first night of the festival, or when Oli Sykes did the same at All Points East, and you can tell why immediately. They’re the real deal. 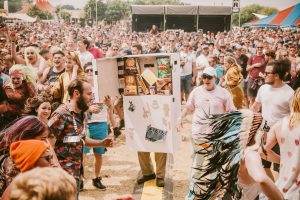 Moving on from tech metal, 2000Trees cross-genre excellence is proved once again. Sounds of the ska-punk The Skints, who are wowing the Main Stage, carry across the festival to mingle with the top-tier pop-punk of Can’t Swim. And after that, it’s time for some skate punk all the way from Australia, and the crowd 100% make sure that Dune Rats know we’re glad they’ve made the trip. No one stands still for a second, there’s barely a break from the onslaught of crowdsurfers (which ends up including the security guards at the end!), and it’s absolutely the reception a band like Dune Rats should have. Amongst thrashy, grungy bangers and covert hints to the crowd about the type of after-set antics you’d expect from a skate punk band, Dune Rats make a stage on the other side of the world from their home feel like they own it.

As soon as we’ve caught our breath, it’s over to the Main Stage – and we’re glad we took a second to get our energy back, because we need it for Every Time I Die! Hot Damn is an album as fast-paced as it is iconic, and the mass of people who have shown up to see it in full are keeping up. This is the turnout you’d expect for a band second to headline, and ETID give a show that is well worth it. Fists are raised in the air, every word is shouted back at the band; this could, in fact, easily be a headline set, especially after Every Time I Die come back on stage to perform choice cuts that aren’t on Hot Damn. 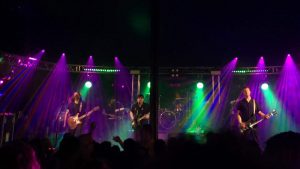 Frank Iero and the Future Violents at the Cave

The only reason we’re glad it’s not a headline set is because it means we’ve got a few hours of this fantastic festival yet, and we definitely make the most of them. Frank Iero, punk turned emo icon turned back punk again, gives a headline set in The Cave that proves that the music he makes just keeps getting better. As you’d expect, there’s a significant amount of diehard, know-every-word-by-heart fans watching, but a substantial portion of the crowd seems to be people who have identified that this is the perfect set to just come and dance, jump around, and go crazy to. Combined with Iero and his band The Future Violents churning out banger after banger, this makes for the perfect almost-ending to 2000trees.

Before catching headliners Deaf Havana, we decide to check out the Forest Session stage – and we’re not disappointed. In the darkness of the forest clearing, we’re blessed with an incredibly raw acoustic performance from post-punk Our Family Dog. They are simply incredible, a true hidden gem, and definitely deserve a bigger crowd than they get. By the end of the set they have people on their feet and gathered near the stage, and a fan of the band is allowed the honour of screaming a verse into the mic as the singer grins at him appreciatively. 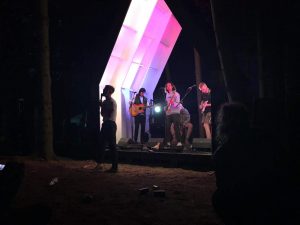 Our Family Dog at the Forest Sessions Stage

From the smallest stage to the biggest, we eventually run to catch the end of Deaf Havana’s headline set on the Main Stage. They sound positively magical, their light alternative sound feeling electric in the night air. It’s a set of dancing and grinning, the culmination of fans singing along really highlighting the sense of community within the field as fireworks twinkle and spark into the sky. It’s the perfect way to close off the festival, with an act that everyone can appreciate, whether they’re into metal or folk-rock – Deaf Havana are loved by everyone.

And that’s it. All we can do now is grab some drinks and go ham on the final silent disco of the festival – it would be an insult to not give 2000trees, the king of medium-sized festivals, the send off it truly deserves.

Check out reviews for Thursday and Friday!
Get yourself tickets for 2000trees 2020 here!