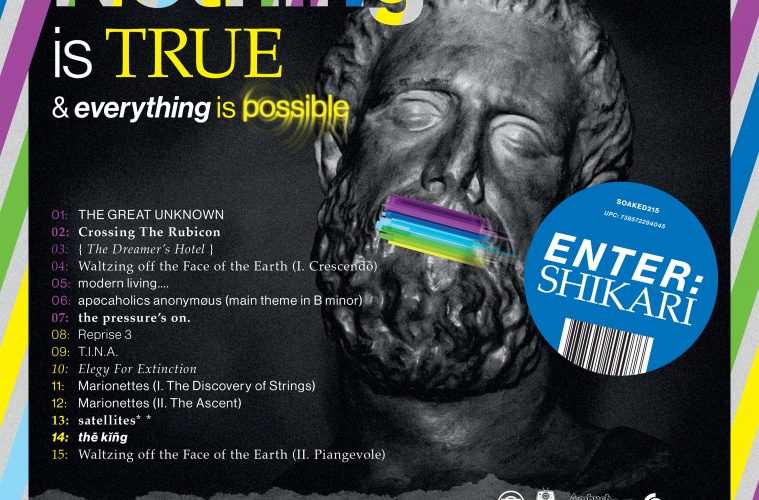 Nothing Is True & Everything Is Possible

Enter Shikari, Nothing Is True & Everything Is Possible
So Recordings

Nothing Is True & Everything Is Possible. It’s a powerful statement, and one that everyone should remember – which is exactly why Enter Shikari have chosen this powerful name for their 6th studio album. Nothing is True is a concept album of empowerment, taking a look at modernity and urging listeners to question their appointed positions in society. The album is a sonic uprising, a battle between the musical proletariat and bourgeoisie; Shikari are here with a call to arms that cannot be ignored.

As soon as the album starts, it’s clear you’re in for a treat. Opener THE GREAT UNKNOWN is Shikari’s answer to Insomnia, a fierce house influence mingling with rock guitars and Rou Reynolds’ calls into ‘the great unknown’. A similar energy is captured on the trance-y T.I.N.A, with its bouncy pace and irresistible jungle-esque synth breakdown, as well as on Marionettes (I. The Discovery of Strings)’s dirty, Hospital drum and bass breakdown. Nothing Is True embraces Shikari’s love of all things electronic, dubstep and club-apt, and the result is wildly exciting and brilliantly fun.

The electronic influence doesn’t stop there – single { The Dreamer’s Hotel } also plays around with synths, melding them with the power of eager drumming and a fierce punk attitude. Modern Living… takes a more synth-pop approach, resulting in a deliciously cool Bittersweet-Symphony-meets-Tubeway-Army track. The Apocaholics Anonymous interlude acts as a microcosm of Shikari’s genre-hopping, an amalgamation of filtered vocals, jungle, big beat whirring, staccato drums, synths and spacey distortion.

But don’t go thinking this album is one long heavy hitter – there are definitely some calmer moments. There are some absolutely gorgeous, full-blown classical tracks like Elegy For Extinction, where the sound feels bewildering grand. As well as this, certain tracks feel rather reminiscent of The 1975, namely Crossing The Rubicon’s pop-y verses and The Pressure’s On’s floaty, chilled out sound. The Pressure’s On in particular feels like Nothing Is True’s Shinrin Yoku, with a light, calming soundscape that seemingly goes on forever in your head.

What’s impressive about Nothing is True, in contrast to The Spark, is how huge the soundscapes are. Where The Spark’s sound can fill your mind, it feels like Nothing is True fills up the universe, with layer upon layer of detailing that gives each track a life of its own. Waltzing Off The Face Of The Earth (I. Crescendo) is a masterpiece, encapsulating the album’s message of how the rich try to silence those beneath them – as Reynolds performs an emotionally charged monologue, circus-like instrumentals slowly grow to a literal crescendo behind him, trying to drown his words out. The crescendo cuts Reynolds off, as if attempting to silence his message, before closing off with an almost satirical, clown-like woodwind section. The instrumental side of this album is chilling, speaking just as powerfully as Reynolds does, if you listen closely.

The album’s message of uprising comes to a climax following the story-like Marionettes (II. The Ascent), when the weak finally rise up against their oppressors, overthrowing the king on the fittingly named track The King. The King is a burst of hope after the album’s struggle, and an obvious single choice, with its gloriously fun beat and brilliantly English exclamations from Reynolds’ prideful performance of the king – ‘is this a wind up!?’. It’s an upbeat anthem sure to be a favourite at shows.

Nothing Is True & Everything Is Possible is a lesson in what makes Enter Shikari so great; their impressive command of genre. Shikari have fused jungle, synth-pop, rock and classical into one beautiful beast. This album is one that will only mature with each listen, and we cannot wait for you all to get your hands on it.

Nothing Is True & Everything Is Possible is out Friday. Pre-order it here.