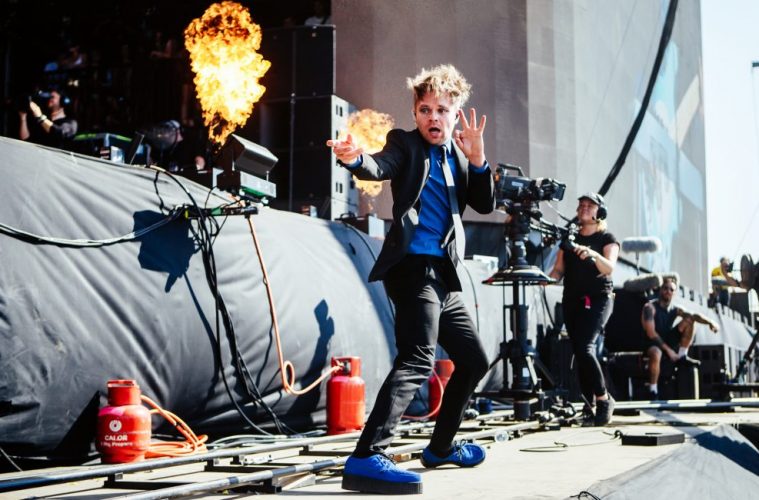 We’re not American, so here at Bittersweet Press the fourth Thursday of November is no more than a slew of spam emails about Black Friday offers we definitely shouldn’t be taking up. But it’s still fun to take a moment to reflect on what we’re thankful for, and this year so far there’s been LOADS going on in the rock world we’re very glad about – so with no further ado: it’s Bittersweet’s Thanksgiving!

1. There’s only one thing that could possibly go at the top of our list: the long-awaited reunion of My Chemical Romance. We’re thankful, the unlucky few who never cared for our favourite NJ emos are less thankful because we won’t shut up about it – but we’ve been waiting six years!! We’ve earned this hype.

2. Bring Me The Horizon cemented their place as rock icons with their very first festival headline set. After a career of incredible live shows and banging albums, BMTH’s genre-smashing latest album amo saw them take to the stage topping the bill of London’s All Points East. A career spanning setlist and appearance of Architects’ Sam Carter for rare cut The Sadness Will Never End made it a milestone to remember.

3. Fugitives of Heaven: our new favourite band! Since skyrocketing onto the scene, Creeper’s theatricality and aptitude for glorious, almost operatic, emo bangers have seen them climbing the venue size stepladder at rapid speeds – so imagine our shock and sadness when they announced their show on November 1st 2018 was to be their last!! However, in true dramatic style, the mysterious Fugitives of Heaven turned out to be Creeper’s pseudonym, and they’ve exploded back into our lives with a brand new single too.

4. Bittersweet favourites Enter Shikari have had a busy year, with a slew of festival dates as well as their own headline tours completed at the start of 2019, but August Bank Holiday weekend saw them outdo themselves. Smashing the previous record for most sets played across the weekend by one band, Shikari hit both the main stage for a mid-afternoon set that saw the whole crowd obscured by clouds of dust thanks to the mammoth mosh-pits, and the pit stage for a joyous headline set at both Reading and Leeds festival. But the cherry on the cake was an acoustic set at Reading’s BBC Introducing stage, leaving Enter Shikari having completed a record-breaking total of five sets across the weekend – each one even more amazing than the last.

5. We might be thankful for this last one, but there’s no way we’re more thankful than frontman Adam Lazzara – Taking Back Sunday celebrated 20 years as a band, accompanying the celebration with a commemorative compilation record. New Jersey emo icons also brought Tell All Your Friends to the UK in full for two very special shows that seemed more Lazzara eulogising than music, but TBS fans certainly loved every second.

2019 has been a year and a half in the rock scene – we’ve had incredible highs and incredible lows (losing much loved bands like Dead!, Lower Than Atlantis, and Mallory Knox). But it looks like 2020 is shaping up to be even better – MCR finally back topping festival bills; Fall Out Boy, Green Day, and Weezer joining forces for the aptly named Hella Mega Tour; Mark Hoppus hinting at an Enema of the State tour next summer… We can’t wait to see what next year brings.