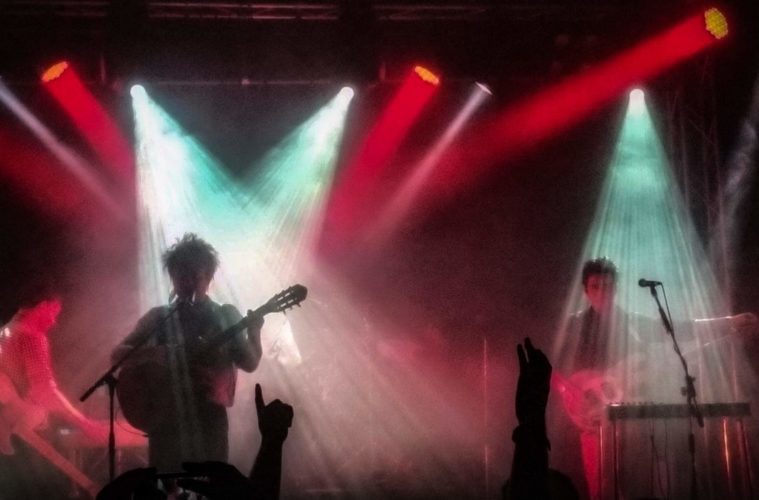 For a band that can easily sell out Alexandra Palace, Enter Shikari sure do love an intimate show. Though The Dome is no way near as minuscule as the show played at the 60 capacity Hope and Anchor, the 500 capacity venue still feels like an incredible treat — if you were to stand against the back wall of the room, you’d definitely still be able to see the sweat on Rou Reynolds’ forehead. The fact that the show is in support of Warchild also adds to how special the night feels, Shikari’s messages of breaking down barriers and helping others stronger than ever. Coins are dropped into donation baskets and charity merch is snapped up immediately, before people excitedly crowd in before the stage in anticipation of the unforgettable night that is to come.

Openers Hot Milk sound surprisingly like We Are The In Crowd, to the point where it feels almost nostalgic listening to them. They truly embody pop punk, with thick American accents to boot. What’s quite surprising is when the band speak to the crowd after their first song — they’re from Manchester. Everyone is confused. It makes their performance feel a bit more outdated, since most bands tend to not mask their accents nowadays, but the feeling of nostalgia still makes the set enjoyable.

But nothing can quite top Enter Shikari’s unstoppable performance. From the start of The Sights, everyone in the crowd can tell that this is going to be a special night. The crowd is immediately chaotic, everyone throwing themselves around. By the time Labyrinth comes around, it’s only three songs in and Reynolds is already stood on the barrier, towering over the sea of pits to scream into everyone’s faces. Everyone is covered in sweat already as they yell along to the beeps in Labyrinth, and the arrival of Arguing With Thermometers cranks the heat up even further.

The incredible energy of the crowd not only manifests itself in moshpits, however. A circle is pulled back for a human pyramid to form, to which Reynolds announces ‘oi Chris, see if you can get on the top’. Chris Batten, of course, is more than eager, clambering on to the stack of bodies. Reynolds gives a shout out to the bottom row, the ‘unsung heroes of the human pyramid’, before crashing into the next song… The Paddington Frisk. Everyone collectively loses their minds, a tornado of energy crashing through the crowd once more, making the pits electric.

By the time Reynolds is performing Take My Country Back, everyone is desperate for the break. The song also hits even harder at this charity gig, the meaning behind the lyrics packing an even greater punch. The night has truly felt like a unifying experience both physically and spiritually, everyone grabbing one another to sing the meaningful words into each other’s faces.

However, a Shikari crowd has always got a little more to give, even if it seems they’ve given their all. Live Outside closes the set beautifully, the performance feeling like a burst of serotonin has been shot into everyone’s bodies. With smiles on everyone’s faces, it feels like everyone is a friend. The energy is clearly felt on stage too, as Reynolds takes the opportunity to crowdsurf for the final chorus, wanting to get involved in the action.

As everyone stumbles out of the venue, it’s clear that nobody wanted the show to end. People laugh about the fresh bruises on their limbs, secretly happy about how they’ll be their own little reminder this magical night. Shikari really leave their mark, and with good reason. Nobody is quite as extraordinary — these guys are one of a kind.