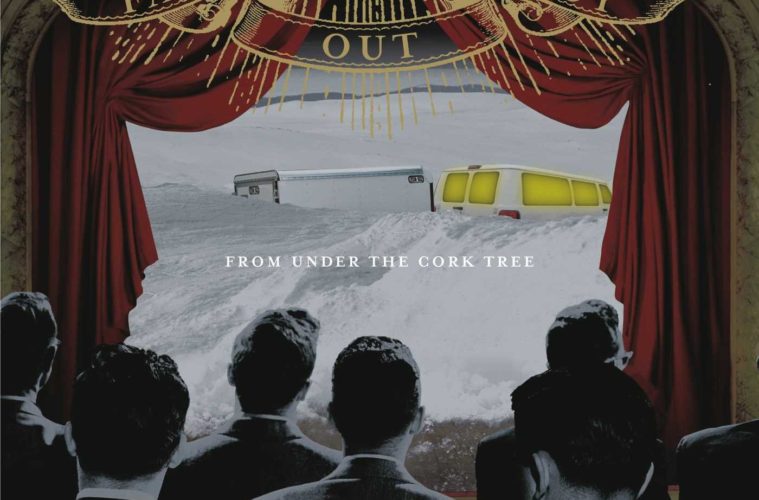 Happy Birthday, From Under The Cork Tree!

Once upon a time, we lived in a world where we couldn’t sing along to Sugar, We’re Goin Down. Because it didn’t exist. It was a terrible life. Today, we look back to the day where that song and twelve others burst into our lives like massive rainbows and made everything better…

Fall Out Boy, From Under The Cork Tree
Island

Thirteen years ago, Fall Out Boy released an album that defined… pretty much everything – it was career-defining for them, solidifying their emo-romantic reputation (and their rep for having long song titles!) and it was life-defining for the hordes of young people for whom this record became the staple of their youth. Since May 3rd 2005, it’s inspired thousands of emo tattoos, and even more internet posts and journal entries. We’re talking about From Under A Cork Tree and because it’s the record’s anniversary, we’re now going to talk about it even more…

Before we can even take into account the way the album sounds, as a cohesive work it’s important to reflect upon the fact that it’s influenced emo culture beyond words. No one could ever make wanting to kill your ex sound as beautiful as Pete Wentz does in Nobody Puts Baby In The Corner, begging to be worn ‘like a locket around your throat, I’ll weigh you down, I’ll watch you choke.’ And that’s not even one of the big songs – Dance Dance almost fails to stand out on the album, its popularity meaning it’s often overlooked. No matter how many times you’ve heard it, though, you can’t forget that iconic bassline (or avoid flashbacks to it being the first thing any emo kid learnt to play on the bass guitar!). Sugar, We’re Goin Down, another radio favourite, has a similarly irresistible invitingness about it – try not singing along to that when it comes on between bands at a show! From the classics to the less commercially known, songs on this album have undeniably taken the reigns of an entire subculture.

As importantly as anything else, FUTCT is musically excellent; the Chicago quartet have executed every aspect of this album to the highest degree of brilliance, from the theatrical leanings of vocalist Patrick Stump’s voice on Dance Dance, to Joe Trohman’s fast-paced guitars that kick the album off so perfectly on Our Lawyers Made Us Change The Name Of This Song So We Wouldn’t Get Sued.

While the album definitely has a coherent sound and doesn’t digress much from that starting point, it never has a dull moment – the heartbreakingly melancholic I’ve Got A Dark Alley And A Bad Idea That Says You Should Shut Your Mouth compliments the cheerier sound of the “therapists pumping through your speakers” in Sophomore Slump, and Comeback of the Year. There are uplifting moments, miserable moments, bitter and angry moments (exemplified in the angsty, almost spooky rendition of I Slept With Someone In Fall Out Boy And All I Got Was This Stupid Song Written About Me), and moments of musical genius (just check out the speedy guitar riffs on Champagne For My Real Friends, Real Pain For My Sham Friends). FUTCT clearly demonstrates how bands from this genre could push their musical prowess and emotional range to impressive heights.

And it would be foolish to try and talk about Fall Out Boy’s pre-hiatus work without referring to the lyrics – while the music brings it together and the culture creates the sensation, neither of those things would be even slightly as powerful without Wentz’s lyrics as the driving force behind FUTCT’s almost painful relatability. The parallels between the opening of the album and the end exemplify the point: “I used to waste my time dreaming of being alive, now I only waste it dreaming of you” vs “I used to obsess over living, now I only obsess over you.” Dreams and obsession play key roles within the album thematically, and these two lyrics are an embodiment of the way that Fall Out Boy drive home their ability to articulate words that define their feelings so unforgettably.

The lyrics aren’t always easy to grasp, though. The popularly misquoted Sugar, We’re Goin Down is just one example of Wentz’s words getting twisted, but once you understand “a loaded God complex, cock it and pull it”, you’ll never look back. In penultimate song Get Busy Living Or Get Busy Dying, we get a rawer taste of the spoken word that makes an appearance on Fall Out Boy’s later work, a perfect ending building to a moment where “we’ve got nothing left”, before a flawless segue into album closer XO. And while the listener might get a breather on the song title, you definitely don’t get a breather on the song itself. Ready yourself for the emotional pangs of being told, “choose love or sympathy, but never both, love never wanted me.”

We might have left 2005 emo culture back in the decade where it belongs but the music has stayed with us, and so have the feelings that it seeks to express. From Under The Cork Tree is both agonisingly nostalgic and absolutely timeless. If you find yourself seeking an emotional release (or a new insta bio, if you’re feeling angsty) From Under The Cork Tree is the place you’re guaranteed to find it.