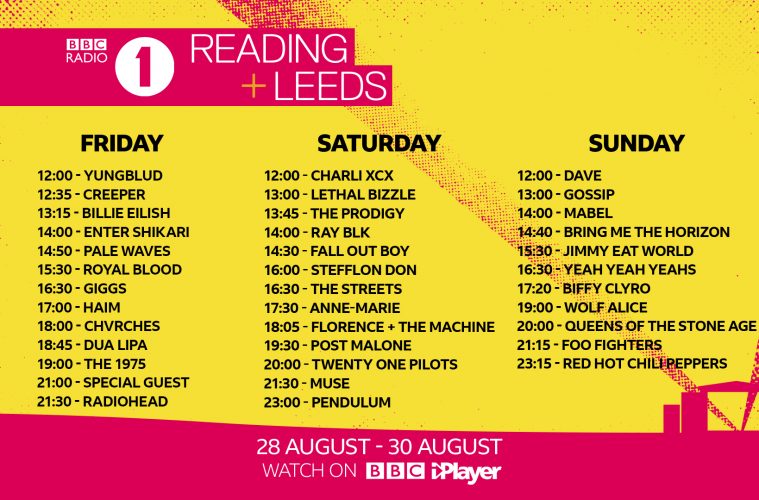 Devastated not to be at everyone’s favourite end to the summer this weekend? It would have been rainy, it would have been muddy, but Reading and Leeds never disappoint – it would have been a sheer joy. And with a line-up like this year‘s, we’re even more gutted not to be there. Luckily for us, R+L have teamed up with iPlayer to bring us a weekend-long selection of absolute highlights, and it’s shaping up to be a fitting replacement – how else could you catch Fall Out Boy playing a slot at half past two?

Friday kicks off with a clean sweep of the best possible livestreams: get your black and pink on and relive Yungblud‘s raucous main-stage set at 12pm, before going straight into our Band of the Month Creeper (though we don’t get to hear any of SD&TIV yet, their discography is packed with bangers that’ll have you moshing on your sofa!). Catch a breather with the atmospheric, incomparable Billie Eilish, but save some energy for Enter Shikari – they might have just 20% of the sets across the weekend that they did last year, but there’s no doubt they’ll ram all that energy into one slot. The evening takes a turn for the iconic, gearing up with Royal Blood, before teasing with a special guest (dare we say MCR?) then the legendary Radiohead to round things off.

Legendary is also the word we’d use to describe the whole of Saturday’s line-up (as long as it’s an old Fall Out Boy set and Saturday actually still features on the setlist!). The Prodigy is a set not to be missed, and keep your dancing/moshing shoes on all day to stay moving to Fall Out Boy, Twenty One Pilots, Muse, and Pendulum. There’s scene titans from every corner of rock hitting Saturday’s stage!

In fact, Reading and Leeds have come through with the goods on every day (but what did we expect?). Sunday’s treats include Bring Me The Horizon and Jimmy Eat World for some early afternoon bangers, Biffy Clyro, Wolf Alice and Queens of the Stone Age for some tea-time anthems, and two of the greatest sets in recent memory, Foo Fighters and Red Hot Chili Peppers, for an end to the weekend that couldn’t be more perfect.

So get yourself to a supermarket, grab yourself some warm tins and a ketchup sandwich, set temperature to slightly uncomfortable, and get ready: this time, Reading and Leeds is coming to you!