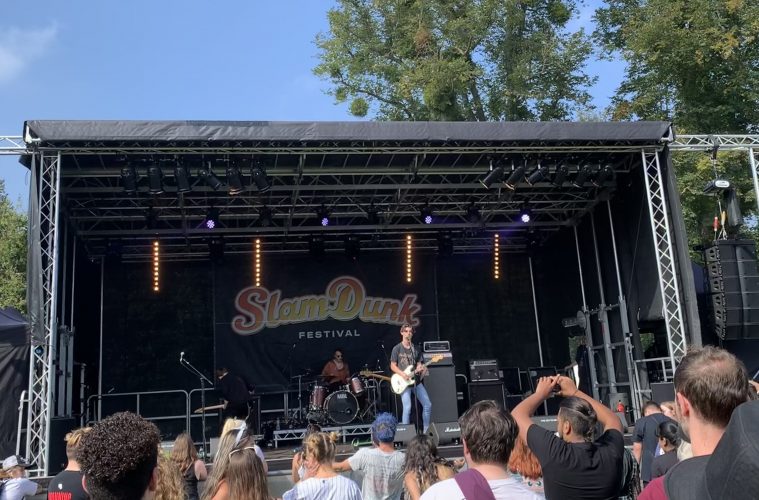 It’s been a long couple of years, but the rock scene hasn’t let us down for a second of it. Even at the height of the crisis, bands were churning out excellent tunes left and right – even it it wasn’t the prime time for a breakthrough. Slam Dunk’s 2021 lineup grew to reflect this – so we’ve rounded up a few of our favourite smaller acts, who are about to score some more of the hype they deserve!

We got to know the wonderful For You The Moon, Weatherstate, and The Hara in a little bit more depth on-site too – tune in to the latest episode of The Bittersweet Hour to meet them.

Whether you know them as Flavours of 2021 alumni, the band who singlehandedly restarted Slam Dunk Records, or the sunny openers of this year’s Key Club Stage, you’ll know that For You The Moon have got a knack for a singalong. Even with just a handful of tunes currently released, the Leeds four-piece have cemented their rep as purveyors of sparkly almost-pop-punk with their blend of emo-tinged guitars, frontman Isaac Cooter’s silky vocals, and the simplicity of the stories they tell. They enchanted the first lot through the gates at Slam Dunk practically effortlessly, their bright hooks a perfect match for the midday sun. For You The Moon’s tunes are just as fun to whether you knew every word or were a total newcomer – and they definitely left their set with more than a decent handful of new fans, too.

If you didn’t see The Hara at any of their festival appearances, you probably heard them anyway. They’re a band you can’t ignore, whether your into it or not – frontman Josh Taylor stomps around the stage in a leather kilt, belting out The Hara’s abrasively catchy tunes with simultaneous intensity and satire, pausing between songs to monologue about the audience, the view, stuff the crowd is shouting (more often than not, “TAKE IT OFF”, as Taylor stripping off the skirt and leaping into the crowd has become customary in riotous football-anthem closer Friends). It’d be easy for a snobbier crowd to hate The Hara, but there’s not one person in the crowd not fully drawn in by them at Slam Dunk on Sunday – and we have to practically fight through the people stopping the band to tell them how good they were on the way to the picnic table we meet them at. Believe the hype!

Over in the Jagermeister tent, Hacktivist have people spilling out of the sides of the tent with their electrifying mish-mash of sounds. It’s punky, it’s heavy, it’s really really noisy, and it’s really really good – June’s album Hyperdialectic is one of the most straight-to-the-core intense records we’ve heard all year, and it’s, unsurprisingly, even more ferocious live.

It’s Weatherstate’s first Slam Dunk, but you wouldn’t know it – their instantly classic sound could be straight off a late 2000’s billing. The band haven’t had too much time to rule the tour circuit with the gritty nihilism of 2019’s Born A Cynic, so the crowd buzz grows just as high for those cuts as they do for newer tunes Hangar and Current Dose – which slip in easily. Weatherstate know their sound, they know their audience, and they know how to provide a perfect, punky, grungy mid-afternoon mosh-along.

Not only is it Noahfinnce’s first Slam Dunk, but he can still count his live performances on one hand. His Hopeless Records signing and his major breakthrough all took place in the wild throes of COVID, so it’s natural that his set feels pretty euphoric – off the internet, and onto the Key Club stage, replete with a dancing rat in a suit and tie. And straight into the deep end too, with a run of sold out shows coming in the next few days! Now the ball is really rolling, with no signs of stopping.

For tunes from these lot, and more, check out our Found ‘Em At Slam Dunk playlist!