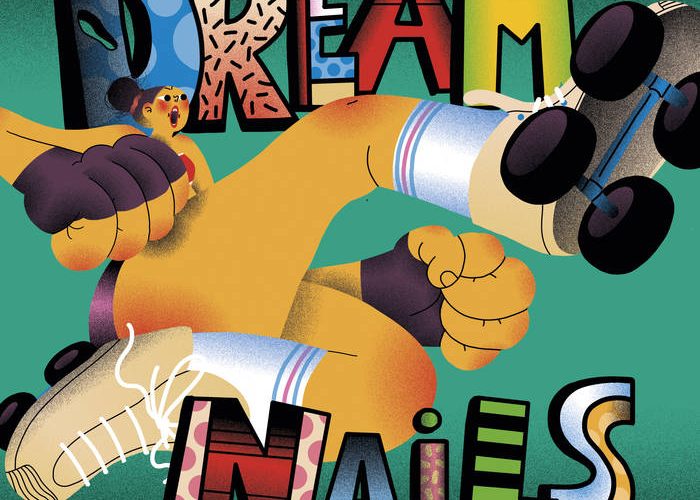 In a time when gigs as we know them seem like a faraway pipe dream, an album that feels as energetic as a gig is a godsend. And Dream Nails’ eponymous, epic debut delivers exactly that, more vividly than you could possibly expect! Kicking off with a recording of the band’s affirmations of positivity, and peppered with vibrantly entertaining spoken interludes featuring a recording from a gig, Dream Nails is absolutely, fervently alive. It feels intimate, fierce, and infinitely cool.

It doesn’t get more punk than this – Dream Nails tackle everything from being aired in a text, reproductive justice, homophobic hate crimes, people, jobs, lightheartedness, rage, joy… we could go on! What’s most fabulously done on the record is the effortless consistency with which Dream Nails handle their subject matter – singer Janey Starling screams out “two blue ticks” in response to being left on read with the same fervency as she yells “kiss my fist” in response to the fetishization of queer women. The latter track follows on from a clip of a news reading about a homophobic attack on two women, one of the album’s most solemn points, but the vehemence of Dream Nails’ effervescent punk delivery mean that tough subjects turn into rousing calls to arms.

There’s moments that sound like an early Libertines blending seamlessly into cuts that sound like they could be straight off a Regrettes album; Dream Nails’ pool of influences seems to be unlimited. There’s one common factor though: the fun doesn’t stop for the whole electrifying 25 minute runtime. This Is The Summer is a skate-punk explosion, People Are Like Cities is an old-school riff-fest, Jillian and Swimming Pools are glittering punk-pop anthems – it’s a singalong riot and it’s devastating to think it’s going to be months before we can be headbanging in a pit to Payback.

The album is such a whirlwind it’s hard to even pin down specific things that make it such an exhilarating listen, but another calling-card that stays firm through every track is definitely the joyful gang of pals vibe. Barely a second goes by without Starling’s delightful, ferocious vocals being joined by her bandmates’ backing vocals. Call-and-response (musically or literally, as in interlude Do You Want To Go To Work, which is definitely going to be my new alarm tone) means that Dream Nails have created a gorgeous, immersive, inviting record that wraps you up and whips you into its punk wonderland.

Immersive is definitely a keyword for Dream Nails, as to accompany their album release they’ll send you a specially-made square of sticky venue floor to stand on for an exclusive live-stream! That’s right, it doesn’t get more authentic than that. Gig In A Box also comes with merch, a ticket stub, a wristband and a beer or non-alcoholic beverage – possibly the most creative response to COVID gig restrictions we’ve seen so far! And when Dream Nails is released, we can guarantee that you’ll be so desperate to be catching it live that you’ll be counting down the days and sleeping with that square of venue floor as a pillow. And definitely spinning Dream Nails non-stop.

Dream Nails is out Friday!