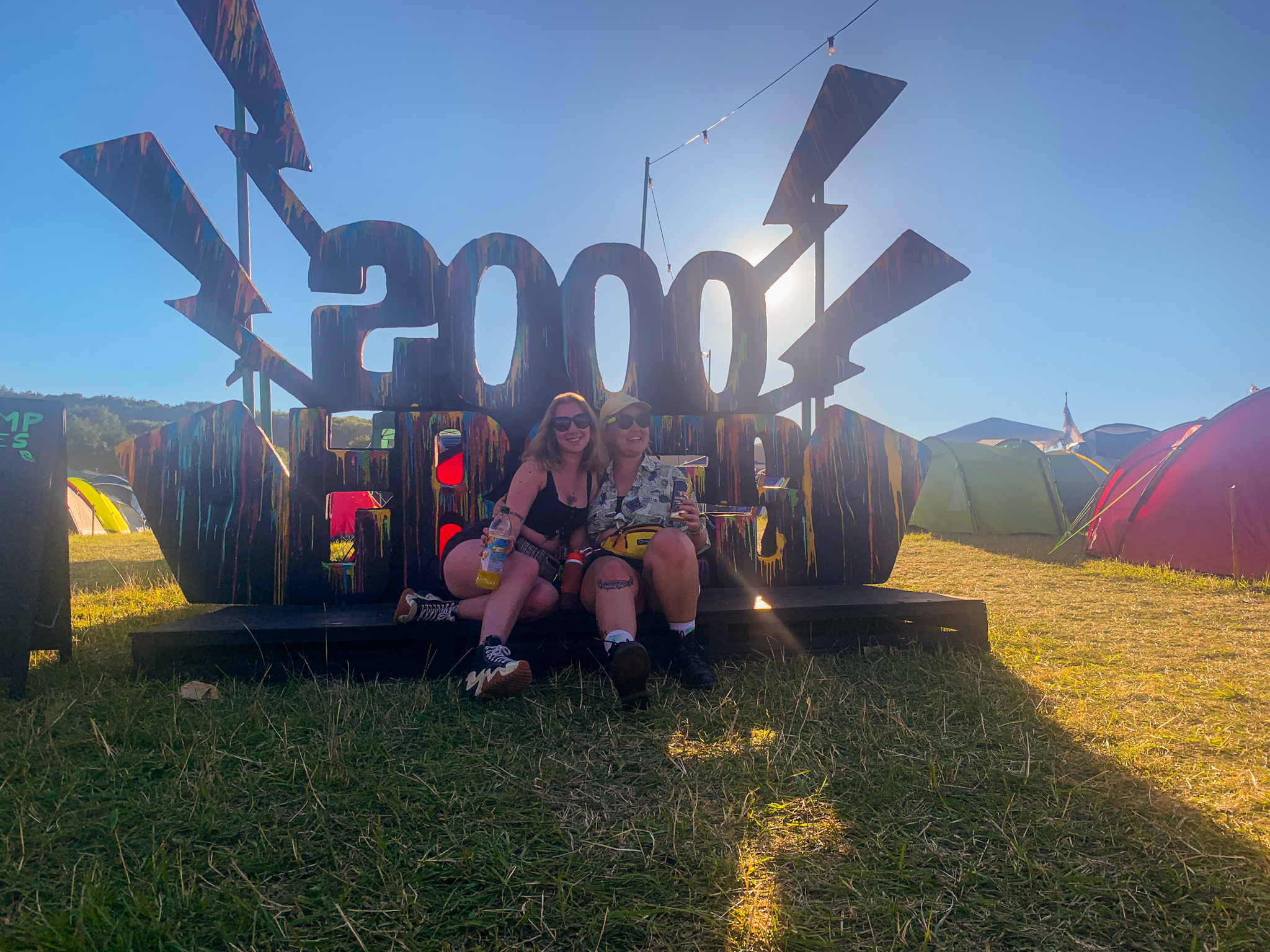 After three long years, the wait is finally over. Yes, live music has been back in the swing of things for a little while now, and we’ve had many a can’t-quite-believe-it euphoric moment at a show since things did open up. But there’s been one conspicuous absence unticked from the post-COVID party bingo card thus far – 2000Trees. You beautiful thing. The best spot for finding your next favourite band, the brightest crowd, many of whom have been coming as long as the festival has been around, and we’re finally descending back on Upcote Farm for 2022’s edition.

2000Trees haven’t bothered with going ‘all-out’ for their grand return – instead, the immediate atmosphere is created by how tangibly everyone loves this festival. Evidence of the outpouring of support for Trees’s crowdfunder back in 2020 is everywhere, from 2020 Never Happened T shirts to the A4 mugshots adorning toilet doors (which you could donate £50 to, and supposedly grant whoever’s lucky face is on the door a queue jump). Being faced by that glittering TREES sign just feels like a homecoming 10,000 strong. No one needs anything extra to feel that magic.

Trees is notorious for having its very own class of bands, who return every year, and feel like as much a fixture of the festival as the stages themselves. Nervus are one of these bands, and hearing them radiating across the Cotswolds as we navigate the incoming traffic before running in to finally have a dance around is a welcome and a half. Every year, Nervus come back bigger and better with a new album under their belts, and this time it’s tracks from latest album The Evil One that merge brilliantly with classics like It Follows and The Inconvenient Truth.

The cross-genre masterclass that Trees puts on year on year is immediately in full swing, too, with Ithaca storming onto the Cave stage with their hardcore delight. The Cave has taken on a new role this year – it’s swapped with the Axiom, which has taken on designated second stage responsibilities. The Cave has typically packed the heavier end of the lineup, so it’s fitting that it’s taking more of a discovery this year, because Ithaca are a guaranteed noisy Next Big Thing with as much charisma as they have decibels.

The Forest stage has had a makeover too, and as Lande Hekt enchants in this fairy-tale setting, it shines. What was once a four-poster stage best suited to dreamy acoustic sets has become a bona-fide log cabin full-size stage, half out of a fantasy book and half out of a children’s TV set. The upgrade retains the original charm, though, and couldn’t be a better spot for Lande Hekt’s confessional punk tunes. Lyrically, she’s vulnerable, but here on stage she feels totally at home in herself and in the subject matter she’s singing about.

The tour of Trees stages wouldn’t be complete without dipping into the spoken word stage, which perhaps because of the available shade and deck chairs, perhaps because of the brilliant comedy-and-more lineup, is filled to bursting every time we pass. We dip in for a quick pub quiz – because what festival is complete without one of those? It goes without saying that Trees in-jokes abound in the answers, another bit of evidence to add to the Trees-is-the-best pile.

As the sun moves lower in the sky, spirits only get higher, as the big names of the day start to emerge onto the stages. There are quite a few last-minute lineup changes, but of course, festival-goers are prepared for that in the current climate. And masters of lineup that they are, Trees have got surprises in the bag to sweeten the deal – Holding Absence step in for No Devotion today, and they get a hero’s welcome. After cementing their reputation for a stunning live show last year after releasing The Greatest Mistake of My Life, they return to Trees delightedly pointing out all the different stages they’ve played up till now, to their biggest crowd yet.

Can’t Swim are another 2000Trees fixture, and they also play triumphantly to their biggest crowd yet – there’s definitely a sense that people aren’t willing to miss a second today. At Trees gone by, things have always felt quite relaxed and crowds can be as easy to break into as they are rowdy at their cores, but approaching the Axiom for Can’t Swim, it’s obvious that that’s not the case this year. The Axiom has been spilling out its sides pretty much non stop today, and absolutely deservedly so.

It’s a bit sunnier over on the mainstage than what people are used to when seeing Creeper – but somehow, they make it suit them. Like vampires, they glow, and like true performers, even with their usual theatrics rationalised for a festival set, they put on a show to remember. At this point, it feels that theatrics are in Will Gould’s bones, and he conjures an aura of delicious darkness even in the late afternoon sun of a summer’s day. Creeper have always been a band based around concepts and narratives and rich storytelling, but it’s easy to forget that they’re masters of the festival singalong anthem as well – and half the set gets the anthem treatment today, from Suzanne to Crickets to Ghosts Over Calvary to Misery (which they actually play this year… true Trees fans remember when they replaced it with a rogue Meatloaf cover, which though everyone enjoyed, wasn’t the melancholy catharsis most were craving. We’d love to see the Meatloaf cover make a return though!)

It wouldn’t be Trees without a good old painful clash, and tonight’s comes in the form of the classic vs the cutting edge: Anti-Flag in the Axiom vs Cassyette in the NEU stage. Luckily they’re nearby, so catching a bit of both is very doable. Running from the political-punk 101 that Anti-Flag always put on with their biting selection of topical tunes, straight over to the riotous singalong that’s seen breakthrough star Cassyette fill the NEU stage to the brim is the best kind of whiplash, and both artists make things very, very worth it. Cassyette may not be a Trees stalwart yet, but this crowd definitely wants her back.

After basking in the nostalgia of Jimmy Eat World, tonight’s crowd have just about enough energy left for a quick dance at the silent disco, because it wouldn’t be 2000Trees without belting MCR out to the rolling hills before doing a quick change over to Belinda Carlisle, and so on around all the tunes you could possibly be in the mood for.

Roll on to Friday with us here, or if you’re convinced already, grab tickets for 2023 here.