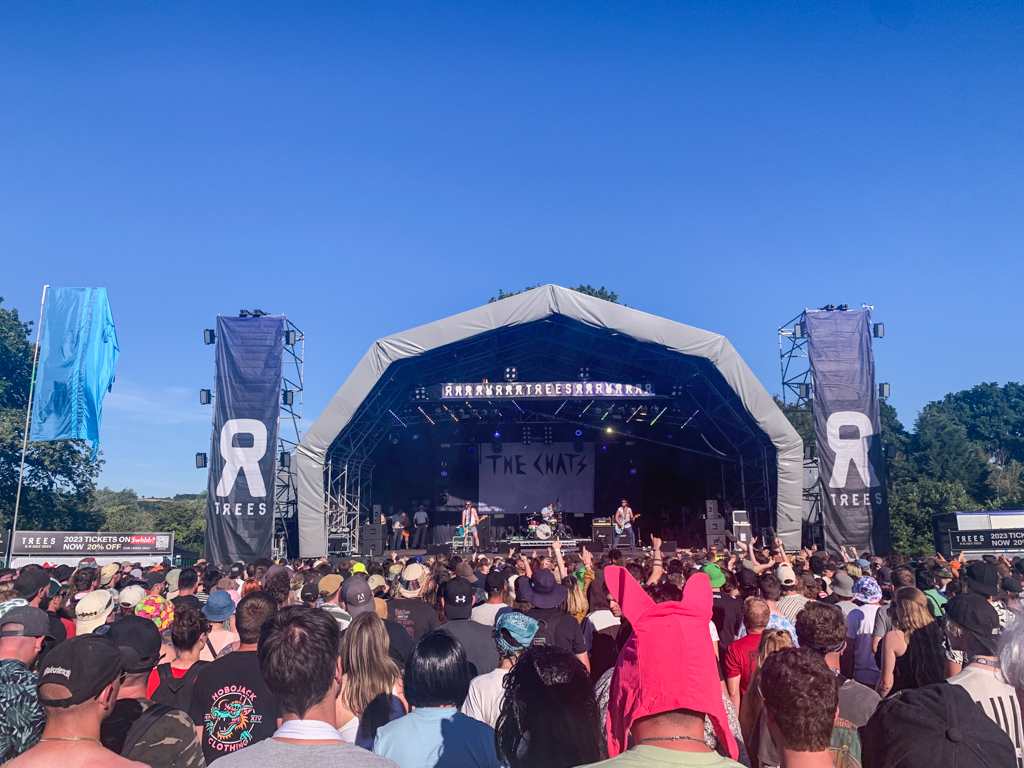 On our final morning of a festival, you usually get a little sense of bittersweet sadness that another year is almost over. At 2000Trees on this fine Saturday morning, however, there’s absolutely no sign of it. There are quite a few pink faces and shoulders, but no dampened excitement whatsoever – just a renewed buzz for the treats in store today.

Panic Shack gave a brilliant preview of what they’re like on stage during last night’s DJ set, and they provide the same bubbly brightness to open up the Axiom with their deadpan punk tunes. And for more punk that oscillates between feverish and undeniably fun, it’s main stage time, for the sheer delight that is Dream Nails. They flicker between hazy, sunny bops and celebratory lightness and inspiring rage absolutely effortlessly, delivering a set that is not just angry in the face of queer issues, building ‘non-binary resistance’ with ferocious power, but also just a beautiful queer party. “I see all your queer hairstyles!” laughs vocalist Leah Kirby, as the whole band revel in the crowd they’ve pulled in. And they know us well, with the choice cover of t.A.T.u.’s All The Things She Said going down a storm.

No holds are barred for the rest of the day, as we barrel straight into Lizzy Farrall who, like many of the acts breaking through on the NEU stage, puts on a main stage performance. From her captivating dark-pop sound to her theatricality (outfit change complete with a dousing in fake blood!), the set feels all too short and utterly magnetic start to finish.

By this point, we’re really used to running from stage to stage without a pause for breath, and as Mannequin Pussy step out onto the mainstage, it’s like a homing beacon has gone up for the whole festival, who funnel into the main arena to watch a masterclass in vital political punk. Missy Dabice is frenetic, both in her vicious vocal performance and in the outpourings she gives between sets – it’s a rough reminder that too much is going on in the world right now to fit into a half hour festival set, but also a staunch reminder of the fact that in protest, there’s hope.

2000Trees is always a showcase of the best of the best of the up-and-coming, but the volume of next big things we’re treated to today is off the scale. Gen and the Degenerates are the next to give us a schooling in new noise, careening around in the NEU stage to a rapt audience. There’s a definite synergy between Gen making their Trees debut, easily charming when they’re not delivering wild vocals, and the immense main stage debut Nova Twins give next. Nova Twins are easily a staple of the alt scene now, proven by the numbers they’ve drawn in the afternoon heat to bop along to cuts from freshly-released album Supernova as well as now-classics. It’s incredible – if unbelievable – to think that just back in 2018 they were the ones wowing a small crowd in the NEU stage.

The NEU stage is, indeed, stacked, and Trees favourites False Advertising give a show with as much effortless cool as ever. The crowd is modest, but it’s clear that there are a lot of returning faces that False Advertising have won over in previous years coming back for more. This is the first Trees since the band released the grunge-punk wonder that was 2019 album Brainfreeze, and to see these songs in their natural habitat is well worth the wait. False Advertising are followed up by indie-punk upstart Lauran Hibberd, who refuses to let her audience watch for a second without being enthralled by her tongue-in-cheek stage presence and ridiculously infectious back catalogue. It’s definitely bittersweet to hear glittery summer anthem How Am I Still Alive? performed without The Regrettes’s Lydia Night, who was supposed to be here had the Regrettes not had to pull out, but Lauran lets us all sing along instead.

Over on the main stage, The Chats are dead set on causing a bit of chaos. The Aussies deliver a slew of hectic pub-punk bangers, each song stumbling into the next without a second to catch your breath. The tracklist is a beautiful reminder of just how scrappy The Chats truly are, as well as how hilariously straight-faced they manage to be amidst the messy barrage of tracks – even knocking out an amazing bit of guitar choreo (stepping forward, moving guitars up and down in sync, before stepping back… and never acknowledging it happened). The tracklist also doubles as an overview of what a day spent with the Aussies might actually involve, coincidentally (Struck by Lightning, Mum Stole My Darts, Dine n Dash and Drunk n Disorderly…). Every track is met with rampant joy, from the cries of “I’M ON SMOKO!” to “6 LITRE GTR!”. A stupidly fun affair all round.

With the crowd perfectly amped up and ready for movement, the iconic You Me At Six take to the stage. The last time the boys graced the stage they were headlining in 2019 – and their co-headline slot this year is just as much of a treat. As the sickeningly cool rumble of Loverboy blasts out of the speakers, the crowd is ready for a set of gold-star bangers. The set also delivers a subtle nod to the 10th anniversary celebrations of Sinners Never Sleep, the backdrop even reminiscent of the album’s visuals, and the fans are in their element when classic tracks Bite My Tongue and Reckless are knocked out. Josh Franceschi’s charm keeps the crowd moving, and, by the time Underdog hits, crowdsurfers flowing, everyone has had a cathartic mosh and a half.

As the final day of 2000Trees threatens to be coming near to a close, everyone seems to be off to IDLES – but we can’t resist sneaking off to the best Forest evening yet. The evening’s offerings here are a genre whirlwind of everything weird and brilliant, CLT DRP, Zand, a round two from Gen and the Degenerates, and LibraLibra are the closers we’ve been buzzing for. CLT DRP’s fizzy emo sprechgesang is tinged with industrial vibes that are at odds with our natural setting in a wonderfully disorienting way; LibraLibra’s leftfield art-rock enchants and upends expectations all at once; Zand is as devilishly commanding as always, and Gen and the Degenerates manage to outdo themselves from earlier – there’s a good few folks here who’ve come out for a round two as well.

In the spirit of celebrating Trees variety, it’s only fitting that the silent disco offers a flickering selection of nu-metal, house, 80s anthems, classic rock, emo, DnB, and silly little party tunes that everyone can get into. Trees has proved itself once again as the most delicious melting pot of everything good in alternative, but more than that, it’s proved a testament to how much talent is kicking about in alt right now, pushing boundaries and shining brighter than ever.

So now it’s till next time… Grab tickets for 2023 here, and see ya soon – we’re counting down the days.