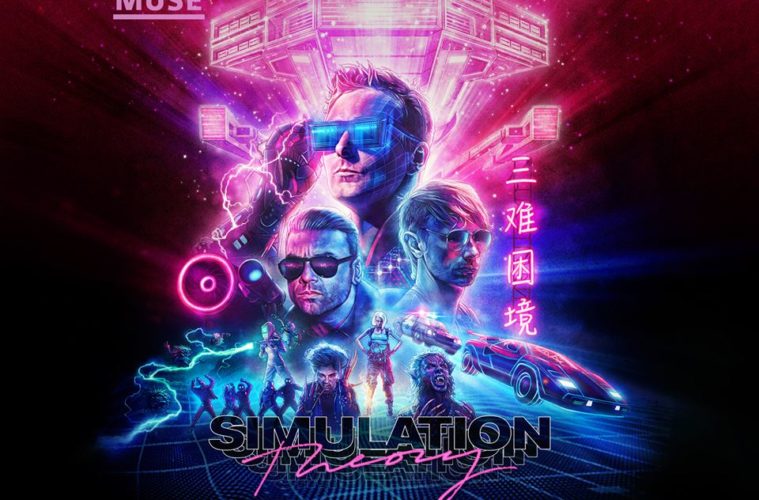 There is a conspiracy brewing on this record — a theory to shake the Gods. Muse are back to corrupt our minds with a new world of neon lights, time machines and alien subtext on the truly fascinating follow up to 2015’s Drones. Simulation Theory shows some of the best sides of Muse, with added Tron vibes (more 1982 and less 2010 remake) and attitude to kick.

We open on Algorithm and it’s immediately clear that only hearing this song live will ever do it justice — It’s one of THOSE songs. With thrilling piano breaks, vocals that could challenge Lucifer himself, and a ghost of Ready Player One imagery, we are pulled into Muse’s world of conspiracy theories and existential dilemmas. It lets you know right away that this album is not revolutionary — it is the revolution.

Dark Side seemingly lines the first stretch of empty road on the self-discovery road trip that is Simulation Theory. Pressure makes you feel like hitting something; it’s a classic Muse song, moving and jumping right alongside you, with thundering percussion and lightning guitars.

Propaganda? It stops you in your tracks, like a trail of oxygen-rich blood in the middle of your path. It is stunning in the way it makes you grin, with undeniable Prince vibes and a murderous composition. Break it to Me is the aftermath, the alien invasion of your mind, setting you off-kilter, gifting you with a sixth sense.

Something Human is… something human. It feels like a romantic subplot in a dystopian novel as Matt Bellamy whispers ‘burn all the money’ into your ears, like a dare to run away with him. Thought Contagion is like meeting an old friend in the middle of the apocalypse — we know this track, we know it’s kickass. It’s an absolute anthem. Get Up and Fight is jarring, as if the rest of the record wasn’t already, and makes you want to do just that. Blockades is the final hurdle – the labyrinth before the end, a beast luring you into its final fight, the light at the end of the universe.

Whilst many weren’t a fan of Dig Down in the beginning, it feels like a familiar foe, here to tell you you’ve made it, and give you a send off into the vast unknown of The Void. The ultimate human fear: nothingness, although this track is far from it. It’s the king of spine-chilling music you expect from Muse – like Drones’ The Handler, or Black Holes’ Glorious. It’s the end of this road, but the start of another journey, another world.

Simulation Theory makes you feel like your heart is stopping and starting at the same time. It’s a pretty great encapsulation of everything Muse have to offer. This is no simulation: they really have done it again.

Simulation Theory is out on Warner Records now.