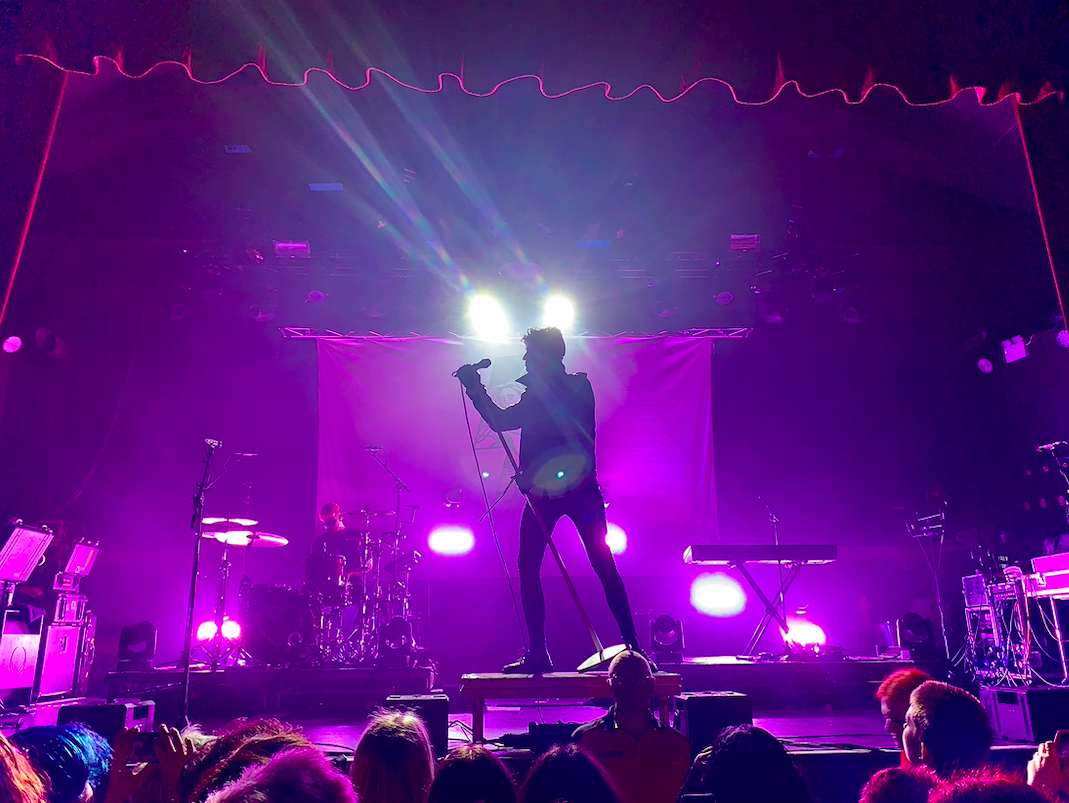 Goodnight, farewell, they’ve killed an era off in inimitable style yet again – Creeper make magic on the very belated final night of their long-awaited Sex, Death, and the Infinite Void tour. Anticipation is high, half because this, Creeper’s self-proclaimed greatest showcase ever, has been not only in the works since the release of their 2020 opus, but because last time Creeper ended an album cycle, they broke up. Luckily, tonight closes on a far more celebratory note than funereal, as Creeper provide their most astounding, spectacular evening of entertainment yet. The Creeper we meet tonight is a band who are at their absolute prime.

The journey to get here is as drama-laden as Creeper’s records. Original supports Static Dress, Wargasm, and Holding Absence were an exceptional billing for the original tour dates, but it wasn’t meant to be this time around. However, Creeper have a bit of a knack for choosing the sparkiest, fastest risers about, so the bands they choose to delight us with tonight are equally as exceptional. James and the Cold Gun, veterans of the Creeper/Salem touring circuit, deliver on the drama for sure – if to a slightly quieter-than-expected room.

The queues round the block drag on well after doors thanks to the rescheduled ticketing situation, but the clamour to get in early speaks for itself as people rush through the doors and straight down to the front to get involved with J&TCG’s classic-rock swagger. Their sprawling, riffy glamour is the perfect aperitif to what Creeper are about to bring. And if James and the Cold Gun set the atmosphere, Vukovi pump the energy up to 11. Known and beloved for their fierce, fun live performance, they get the crowd clearing space for pits and those who’ve held back so far diving in headfirst, compelled by the immense power of frontwoman Janine Shilstone to just go for it.

The energy has been buzzy and lighthearted so far, but when the black curtain goes up for Creeper, it’s like a dark veil is drawn over the whole crowd. We’re all here for a party and a singalong, but Creeper elevate your classic rock show up to something next-level, and then some. By now, after their slew of festival appearances, we’re all a bit more familiar with the opening chords of Hiding With Boys being our first elated moments, but hearing them with frontman Will Gould silhouetted in angel wings behind a pitch-dark screen is… something else.

That’s what’s stunning about tonight – Creeper have a lot of facets, and one of those is ‘punk band who can put on a stellar show with absolutely no bells and whistles’. And one of those is ‘deliriously excitable masters of theatricality who can always push it one step further and add more bells and whistles’. And these two sides balance out wonderfully. Every melodramatic choice is made with artistry in mind, and silhouettes play a particularly important role, whether that’s Hannah Greenwood’s ethereally lit wedding garb for Crickets, performed under a glowing archway, or Will Gould’s desert goth cowboy making striking, angular freeze-frames, armed with a purple-sprayed pistol as we journey to the end of the set. Every prop, pyro, or pose creates a shadowy puppet-show of what’s playing out in their lyrics, and it’s captivating.

Creeper augment the tales they’re telling in their songs with their visuals – the fizzing classic rock of Midnight and Ghosts Over Calvary shines the way they deliver it, the howling drama of Be My End soars, the Morrissey glamour of Poisoned Heart captivates. Creeper have been stepping it up, and stepping it up, and continuing to step it up, and for those that haven’t managed to hear songs from both Sex, Death, and the Infinite Void OR bonus EP American Noir, tonight brings us to the very apex of everything so great about those records.

Because Creeper have been round the horror-punk houses quite a bit, they’ve got quite some variety in their back catalogue – precisely why they’re so beloved. So how do the more classic cuts fit into this polished, darkly sparkling feat of production? Absolutely seamlessly. The EP songs we get are rare, but unmissable – Black Mass, Astral Projection, Misery, and VCR get their runaround and they shine. These tracks’ theatricality may be less, but their emotional core is just as strong as Creeper have ever been, and they’re delivered accordingly.

Creeper have been waiting a long time for tonight, and it seems to have been worth it – for band and audience alike. And now, we wait, and see how they outdo it next time.