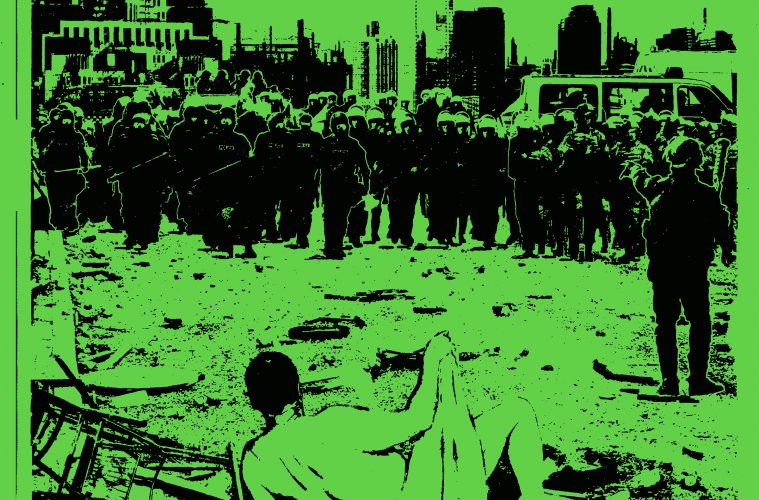 Asylums are no stranger to the surreal; their first two albums Killer Brain Waves and Alien Human Emotions have been riots running between earth and space. While their third LP Genetic Cabaret might have a title as intriguing as its predecessors, it does bring the stratospheric world of Asylums closer to home – but not without a healthy dose of musical extra-terrestrial-ism. Genetic Cabaret scorches through familiar visions, stripping them back to their core and injecting them with vitality so intense the whole record’ll have you jumping out of your seat.

The title track is as good a place to start as any; it sums up everything so great about the record. Genetic Cabaret (both album and song!) is a stomping, howler of a song, the suave theatricality of Cabaret shoved into combination with the inescapability of genetics – and on this album, Asylums certainly tackle the inescapable with grace and vivid visionary. The literal gloom of A Town Full Of Boarded Up Windows forms the basis for a three minute mourning of the ephemerality of modern life; previous track and single A Perfect Life In A Perfect World strives for a moment outside of the encroaching doom.

‘Modern Life’ and shying away from it is a theme that’s been handled so commonly in the music business that it’s become a cliché. The 1975 did it so melodramatically they became a satire of themselves, Enter Shikari made a more convincing stab at it in Nothing Is True & Everything Is Possible, but Asylums do it with such genuine gusto on Genetic Cabaret that it’s impossible to find fault with. Penned in part about frontman Luke Branch’s new fatherhood, there’s a distinct vulnerability about GC, hyper-resonant in tracks like the melancholy-hopeful opener Catalogue Kids and atmospheric slow-burner The Miracle Age.

The whole of Genetic Cabaret is saturated with witty, on-the-nose lyrical nuggets of poetry that set out the picture Asylums are painting. They’ve always had a penchant for snappy track names, but Branch’s way with words extends way beyond what you’ll read on the back cover of the album – the irresistibly rich blend of simplistic images we’ve all seen in our towns and cities with piercing metaphor is expertly done. “Scrape away suburban tooth decay / speak in quotes from magazines”? Genius, and there’s far more where that came from.

Just because an album is a stinging-yet-personal channel of anger, hope, and critique doesn’t mean it can’t be packed with energy and fun, though. One spin of the immense Platitudes, the reeling intensity of The Distance Between Left And Right, or the heavyweight bravado of Yuppie Germs will assure you of that. Asylums are polished up to blinding point: pounding bass, impossibly tight-yet-chaotic guitar riffs, and Branch’s fizzy, spitting vocal delivery is the perfect vessel to bring it all together.

Following the precedent set by Asylums’ previous records, Genetic Cabaret was always going to be an eruption of impossible-to-pin-down electricity and with Steve Albini (the sound engineer behind In Utero) on board, there’s nothing we don’t love about it whatsoever. Who Writes Tomorrow’s Headlines? Not us, but if we could we’d be saying Genetic Cabaret is going to be one of your albums of the year. Read all about it.

Genetic Cabaret is out Friday.