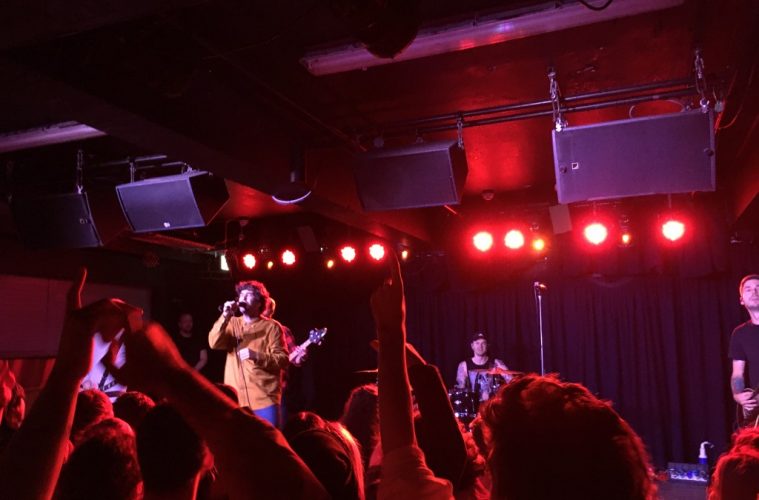 It’s been a while since we’ve had a Real Friends headline tour in the UK – festival appearances and support slots have made sure we don’t miss the Illinois pop-punkers too much, but the welcome they’ve received on their latest run of shows has proved that there’s nothing like RF topping the bill. It’s no surprise that Manchester’s Club Academy is abuzz with a crowd that definitely seem like they’ve been waiting for this night a long time.

Belmont and Grayscale open up the show, and they’re both a perfect fit, complementing the pop-punk/emo stylings of Real Friends but proving that pop-punk isn’t always samey. Grayscale in particular have a strong turnout of fans in the crowd, with energetic and ever-so-friendly mosh pits breaking out every so often, and anyone who wasn’t a fan already has certainly been won over as the band tear through a set laden with choice cuts. Tracks from latest record Nella Vita stand out as bangers that will definitely see Grayscale themselves headlining rooms this size pretty soon.

When Real Friends finally hit the stage, it’s obvious that there’s a lot to be said for nostalgia value when it comes to emo tunes – the crowd tonight is somewhat older than you might expect from a typical pop-punk crowd, but they’re definitely not old souls when it comes to throwing themselves into the show with all the rigour they must have had when they first listened to Real Friends. There’s not a lyric left unsung by the eager audience, and frontman Dan Lambton is the epitome of the positive energy that permeates the whole room – bouncing around on stage with a huge grin that barely leaves his face in a sunshine-yellow top, he seems to be at odds with the often-hopeless lyrics he’s belting out. But it’s this happy/sad that’s always characterised Real Friends’ music, and it’s why we love them, and as hundreds of voices gleefully scream out “if you never break, you’ll never know how to put yourself back together”, it’s obvious that tonight is a night of catharsis.

The melancholy hush of old tracks like I’ve Given Up On You and Sixteen wring us all out emotionally, but there’s definitely no shortage of bangers either. The momentum of Me First, the danceability and immense builds and singalong chorus of Smiling On The Surface and, well, the singalong appeal of every single song on the setlist remind us that Real Friends have never dipped and they’re currently thriving, better than ever. They even get the blessing of the king of pop-punk bangers, Neck Deep’s Ben Barlow, who surprises everyone by popping up on stage halfway through the set! The only thing anyone’s thinking as we flood out the door is that we hope we don’t have to wait so long to see them headlining a tour again, but even if we do, the wait will definitely be worth it.