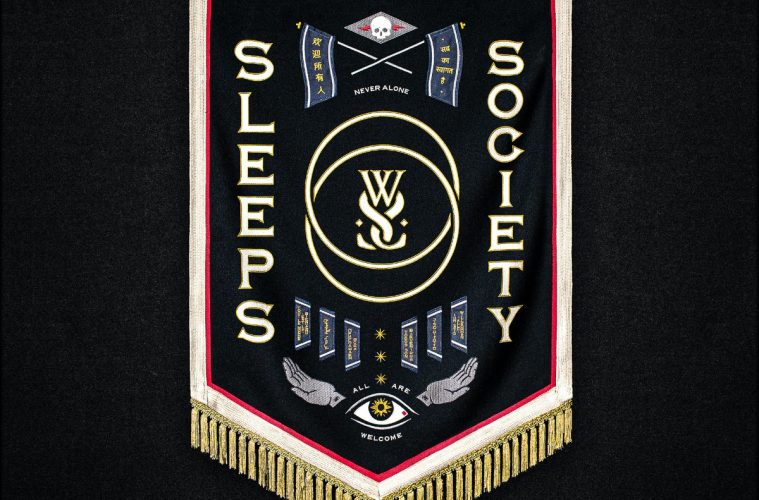 While She Sleeps – SLEEPS SOCIETY

Welcome to the SLEEPS SOCIETY! Delving into the cavernous realms of mental health and self-doubt, While She Sleeps have crafted a poignant album with a purpose. Rather than relying on thundering bursts of metalcore, this time around the guys have opted for a multi-layered listening experience. Impassioned, dynamic and intense, SLEEPS SOCIETY is not to be missed.

Opening track ENLIGHTENMENT(?) is remarkably rich, boasting a huge, dynamic sound from start to finish. It’s a perfect opener, setting the bar high and reminding us of While She Sleeps’ masterful ability to interweave soft and heavy sounds. Moments of gentle, floating vocals contrast with the gritty, girthy drum breakdown midway – it’s almost TOO good.

This ability to contrast soundscapes is a staple theme throughout SLEEPS SOCIETY. KNOW YOUR WORTH in particular shifts midway – chaotic, enraged drums build before a growl of “SHUT UP!” cuts through the noise, allowing an echoing, void-like soundscape to take its place. It gives a moment of reflection, literally silencing the intrusive toxicity – then we crash back into the noise with more vigor than before. And, boy, are fans gonna love this one; we can already hear the crowds screaming along “STAND. TALL. And know your worth! They can only put you down for so long!”

Speaking of, there are so many tracks we know will absolutely dominate upcoming live shows. It’s just those WSS DRUMS… I think we speak for everyone when we say that While She Sleeps’ drumming is unmatched. Adam Savage, you beauty! NO DEFEAT FOR THE BRAVE has such a hectic drumbeat, charging the song forward, forward, forward… And the inclusion of Sum 41’s Deryck Whibley gives the track a bright heavy metal sheen, the guys even infusing the guitars with a punk rock glimmer. YOU ARE ALL YOU NEED is also an undeniable drumming stand-out; YOU ARE ALL YOU NEED is an endless torrent of speed, delectably heavy til the last drop. This track is destined to be killer live – it DEMANDS  a mosh pit to cave in at the call of “I’D RATHER BE–”.

While She Sleeps have also toyed with some tech-y elements on certain tracks – and the result is magnificent. Title track SLEEPS SOCIETY boasts fabulous drumming, but there’s also a vein of distortion pulsing throughout. SYSTEMATIC amps this up, fully embracing it’s dark, tech-enhanced soundscape. The track thrives and twists as if it were alive, its weighty presence coiling inside of your gut. The violent chorus only heightens this sense of the song being alive, calls of “I DON’T WANT IT, FUCK YOU’RE SYSTEMATIC” so gorgeously infectious.

But this album also embraces a softer side. Biffy Clyro’s Simon Neil makes a killer feature on NERVOUS, a heavy look into anxiety with powerful vocals and soft piano. The reflective DIVISION STREET also sounds like a live recording, stripped totally to its rawest for. These quieter moments, again, highlight While She Sleeps ability to go from dark to light sounds. The (unofficial) closing track CALL OF THE VOID is a prime example of their command of softer textures, combining their metalcore-appropriate guitars with floating, choir-like vocals.

In the words of the band themselves, SLEEPS SOCIETY is “a testament to who we are and how we feel”. This album is fuelled by feeling, and desperate need for unity in dark times. While She Sleeps have pulled off an emotionally raw album beautifully, and it’s sure to capture the minds of anyone who listens… And, of course, it absolutely slaps. We expected nothing less.

SLEEPS SOCIETY is out now.