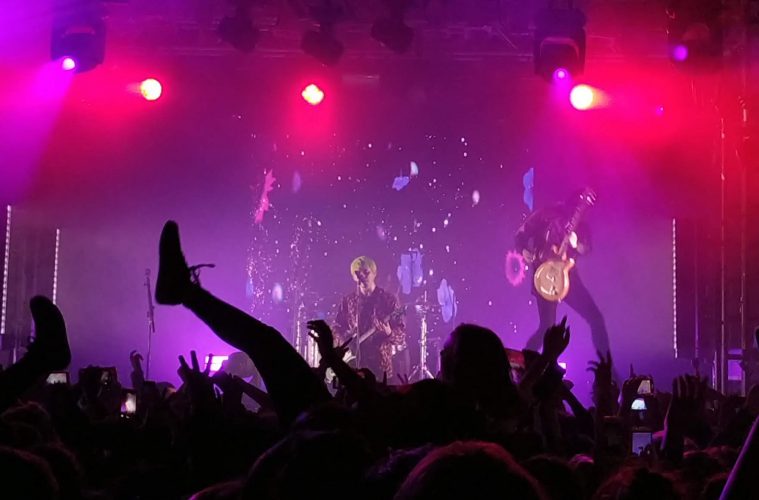 It’s Saturday night and the Electric Ballroom is packed. It’s the first of Waterparks’ two sold out London shows in support of FANDOM, and spirits are incredibly high. Fans young and old are covered in neon, a few even going the whole nine yards and dying their hair Awsten Knight green. Everyone is excited for a night of joyous pop-punk and up-beat sing-alongs, eager to get moving as soon as possible.

Rapper De’Wayne Jackson warms up the crowd beautifully with his high-energy set, his charming demeanour winning over the crowd entirely. His positive stage presence allows him to successfully lure everyone into his realm of catchy hip-hop and erratic dance moves. It’s a shame to watch him leave, really – he’s an absolute delight.

However, thoughts quickly turn to Waterparks. As soon as they take the stage, the true party has begun. Easing us in with FANDOM’s opener Cherry Red, the crowd are immediately hooked, ready to dance the night away. Watch What Happens Next follows, welcoming in joy-filled shouts of ‘YOU DON’T LOVE ME THE SAME! IT’S SUCH A FUCKING SHAME!’ and some enthusiastic bouncing and moshing.

A high point of the night is undoubtedly the mini-compilation segments, quickly shuffling through Double Dare and Entertainment. The crowd absolutely lose their mind over the quickly shifting songs, each new track receiving just as exhilarated a response. Both album homages receive wild mosh and circle pits, showing just how much everyone adores Waterparks’ delightfully catchy back-catalogue.

What makes a Waterparks show so unique is the level of crowd interaction that takes place. This can take the form of Knight asking the crowd to sing a song for him (the crowd sings the entirety of Telephone as Knight clumsily forgets the chords) or even yell along perfectly to their bridging tracks (Knight makes the crowd yell along to Group Chat three times because he wants it to be Perfect). However, this can sometimes be quite a surreal experience – some people do seem slightly terrified of the younger fans’ cult-like chanting and stomping along to Knights vocal warm-ups as a rumble of ‘EEEEEEEEEEEE’ floods the venue.

The final few songs draw out the best audience response, Stupid For You an absolute classic, causing a whirl of movement from every corner of the crowd. Yet, somehow, final track Turbulent cranks the notch up to 11; Turbulent’s heavy, dirty electronic breakdown sees the crowd absolutely ravenous, bodies smashing and crashing into one another recklessly. Even De’Wayne Jackson appears within the moshpit for this song, grinning wildly in his leopard print coat as he is dragged into the beastly crowd. When the song ends, it feels like losing a part of yourself – how can that be the end? We’re all so worked up now!  Waterparks leave us with one final message onscreen after leaving the stage – ‘thank you for coming by, today was a really good day’.

With warm hearts, everyone files out of the venue on a high. A confused, but positive high. The show felt liminal, to say the least – “Did he really do vocal warm-ups for like five minutes? What just happened?”. Confused as we may be, the adrenaline coursing through our veins is a definite sign of a good time. To a night we’ll always remember! God bless Waterparks, you strange, brilliant boys.