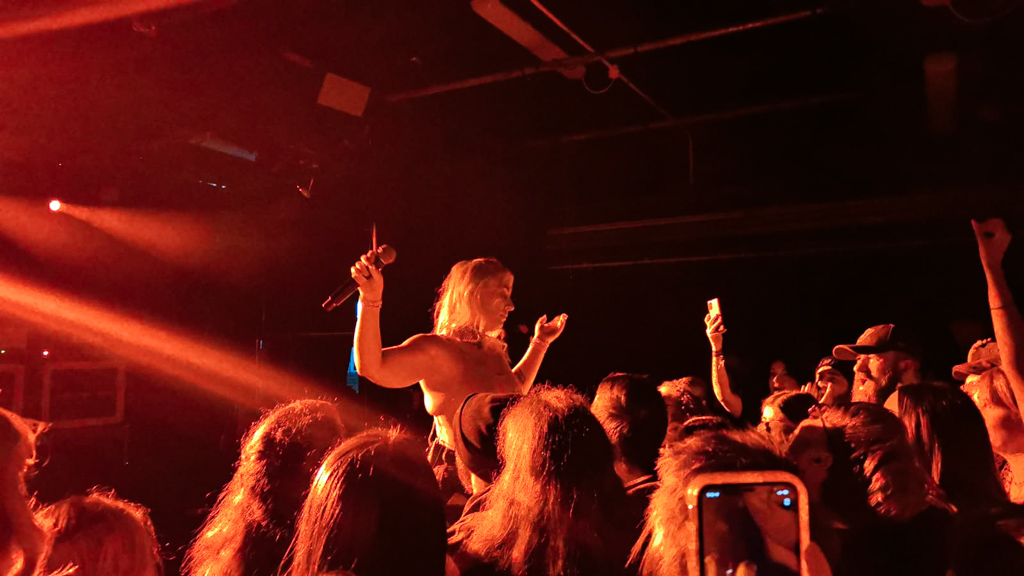 After blowing us into the stratosphere with the brilliant NULA, which came out just last Friday, and then astounding at none other than a 360 degree planetarium launch show, VUKOVI are bringing the show on the road. They’re already one of the universally-accepted best live bands on the scene, a staple of any rock festival and a relentless good time, and we already know that NULA’s singles go down a storm in the live setting (thanks, 2000Trees), so now tonight is already set to be out of this world.

Opening up the show with electro-punk-pop from down below is ZAND. Though the devil horns may be gone, they’re still a vision to behold, silhouetted in bat wings and working their way through a set that’s equal parts saucy, savage, and serene. Whilst the likes of Boys Like U and $lut Money aptly build hype and get folks moving, it’s equally moving in a different way to see recent cut Battery Acid, ZAND’s slowest and most painstaking track, get the lighter treatment. ZAND is equally captivating whether on a sexy banger or a sad bop.

As the opening riffs of LASSO ring out, we are taken to another planet, but for an album that’s so astro-themed, there’s also something deliciously gritty going on in the room tonight (we are also getting to the end of our repertoire of space puns). If NULA on record is a mega narrative traversing space and time, then the 400-odd of us in Manchester’s Academy 3 to watch Vukovi in all their glory get to stop moving through space and time and just live in this wonderfully familiar moment, grounded by the constant jostling and slamming your feet into the floor when you fall over the barrier after yet another crowdsurf (the waves don’t stop). That may be down to the visceral energy of the songs, but it may also be down to Janine Shilstone and Hamish Reilly’s undeniable, magnetic stage presence. Shilstone [vocals] is a force of nature, commanding the room with vivid swagger and a wicked sense of fun.

Old classics get the star treatment, of course: Run/Hide is explosive, C.L.A.U.D.I.A is a riot, and for the most beautiful moment of the set, Shilstone joins us in the crowd lit up by a sea of phone torches glittering to sing emotive number Colour Me In. But equally exciting is how feral everyone’s excitement for new cuts are – only out a week, but this crowd is already falling over themselves to scream out the words to QUENCH, to fling themselves around the pit, and for SLO’s climactic prechorus, howling “I LOST CONTROL AND I LIKED IT” to a reverberating roomful of people doing the same. Vukovi’s knack for a hook and a belter of a live chorus is more evident than ever as there’s not a moment where everyone isn’t fully immersed; there’s not a single song that doesn’t hit perfectly.

Vukovi are a formidable performance, and with every record, they get more vital. Now, with conceptual chops in their back pocket and partway through a tour selling out their biggest headline shows to date, there seems to be even more fire in their belly to go even more stratospheric. The creative excitement and readiness for much, much bigger stages positively oozes from the band, and as they close on La Di Da, it feels cemented at anthem status.