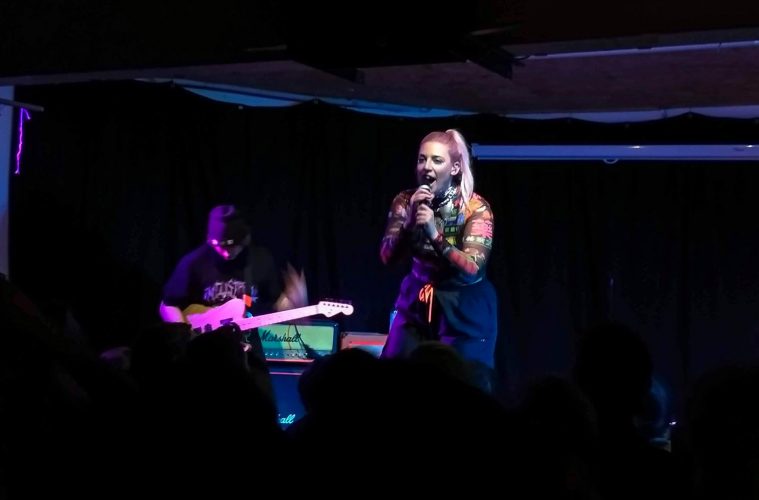 The downstairs of Hyde Park Book Club is always an intimate affair; people are piled in, elbow to elbow, in the small basement gig-space. The sold out venue is buzzing with excitement, everyone eagerly discussing how much they loved Vukovi‘s latest release Fall Better, how they can’t wait to hear the new tracks live.

Soeur start off the night, blessing the crowd with their cool stage presence. The three-piece ooze class, everyone pleasantly entranced by their grunge-y sound and math rock structures. Members Anya Pulver and Tina Maynard are a reminder of how talented women in the rock-world are as of late, unflinchingly confident and self-assured in their craft.

After being pleasantly warmed up, Vukovi soon take the stage. Members of the crowd yell along to a playback of 17359, voicing their excitement for the ‘dirty fucking riffs’ set to come – and these riffs do indeed arrive. When the drums and guitars finally crash into action, signalling the start of Violent Minds, people are vibrating with energy. C.L.A.U.D.I.A and Behave follow, only kicking the energy up a notch, people unable to resist singing along with Janine Shilstone’s calls of ‘CLAUUDIAAA, DIDN’T REALLY GET THAT FAAR’.

What is immediately evident is how enamoured with Vukovi everyone is. The Glaswegians have an amazing stage presence, able to win over the crowd easily with their friendly banter. As soon as Shilstone utters her first words to the audience, commenting “well this is cosy, ain’t it?”, everyone collectively becomes putty in her hands. She goes on to express her surprise at selling out Hyde Park Book Club, having thought “nobody knew us in Leeds”, only further highlighting how normal and humble these guys are.

A musical highlight of the gig is definitely Aura. The song feels quite magical in the small basement space; its fast-paced energy has people dancing and pulsing along, Shilstone’s voice filling the tiny space. Her vocals are just as enchanting live as they are on the album, a true testament to her talents. This only fuels people up with more excitement for when I’m Wired begins, everyone eager to sing along and enjoy themselves.

One thing that is notable about the gig, however, is how restricted people are being. The first proper mosh takes place during Run/Hide, when Shilstone hints that this song is a perfect song for a Wall of Death. The crowd suddenly becomes what it should have been the whole time: a mass of bodies flinging back and forth, grins on every face. Shilstone semi-seriously chides the audience, saying “NOW the gig starts!” before telling everyone they better give it their all for the last song, as it’s the last chance they’ll have. La Di Da’s iconic opening rings out across the venue – ‘love me, love me, you wanna leave…’ – and the crowd responds, a mosh pit churning and bouncing for the entirety of the song, thankful to finally be moving.

As people file out of the venue, you can hear awe tinged with regret. Vukovi are a band that you need to move to, to sing along to until your lungs ache, and everyone only seemed to realise at the very end. Regardless of the tamer crowd, however, everyone is very much in the same mind as to how amazing the performance was. Even if the crowd wasn’t as wild as would be normal for Vukovi, the effort put in was just as high-energy and enthusiastic. Vukovi are just as down-to-Earth as they are stupidly fun, and that’s something nobody can deny.

Catch Vukovi at 2000trees this July!