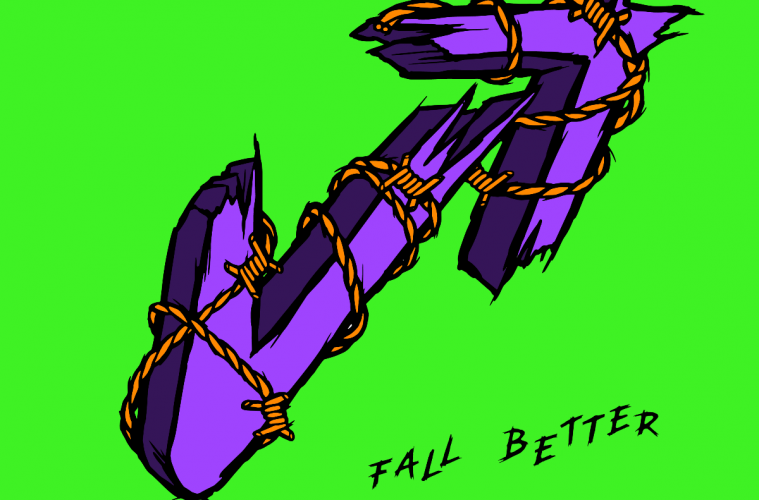 The Glaswegians are back and they’ve got some dirty riffs in tow. Vukovi’s latest release Fall Better welcomes a return of their signature sound – gorgeous vocals, fierce instruments and an unrelenting tempo. If you’re looking for some noisy, energetic pop-rock that will get you up and moving, then Fall Better is here to answer all of your prayers.

Violent Minds kickstarts the album, encapsulating all that Vukovi stand for. We’re immediately given those dirty f***ing riffs that prelude track 17359 promises; the guitars and drumming are a powerful driving force throughout, constantly teasing and encouraging the tempo to get even faster. Behave also has this quality, culminating in a delectably quick drum section that sees Janine Shilstone rushing to get her lyrics out. The sensation of the song progressively getting faster riles up the listener, and, if Vukovi’s set at last year’s 2000trees was anything to go by, results in an incredibly wild crowd – and, really, can anybody resist singing along… ‘I want you to love me! I want you to stay!’

Stand-out track Aura is only further proof of Vukovi’s ability to drive a tempo through the roof; glittery, light electronic sounds combine with impossibly rapid drums to create a track that has you gagging to be at a show. On top of this, there’s also a meaty guitar riff near the end that is brilliant. Vukovi’s instrumental layering is spot-on, a fact further shown by track All That Candy. These guys can create a grand, rich soundscape that feels all-encompassing, and we are absolutely here for it.

Despite their love of a speedy tempo, however, these guys don’t just rely on a quick tempo to capture their listeners. I’m Sorry, Where Are You and White Lies all take a breather, stepping down a gear to showcase Shilstone’s vocals as well as their ability to structure a powerful, catchy track with just as interesting musical elements. White Lies in particular plays with techno elements rather than relying entirely on conventional instrumentation, and the end result is lovely. Shilstone’s vocals are also just as entrancing on these slower, less heavily packed tracks.

Speaking of vocals, the true beauty of a Vukovi track definitely lies within Shilstone’s performance. Her vocals are uniquely rich, always complimenting the instrumentals of a song and kicking it up a notch. Aura proves this, Shiltone’s voice perfectly able to adapt, become light and airy in a way that makes the song positively glow, somehow. C.L.A.U.D.I.A is also a brilliant example of her amazingly versatile vocal chords; Shilstone’s voice is emotive, able to reflect the tension being built by the guitars and drums perfectly. In many ways, her voice feels like an instrument in its own right, an integral cog that entirely shifts the energy of a song. To put it simple, she’s a bloody talented lass.

Vukovi have successfully captured their spark on Fall Better; real, raw and exciting, these Glaswegians are one of a kind. Whether you’ve heard of them before or not, this album will show you why the world needs to pay attention to this wildly, wildly talented duo.

Fall Better is out now via VKVI Records.