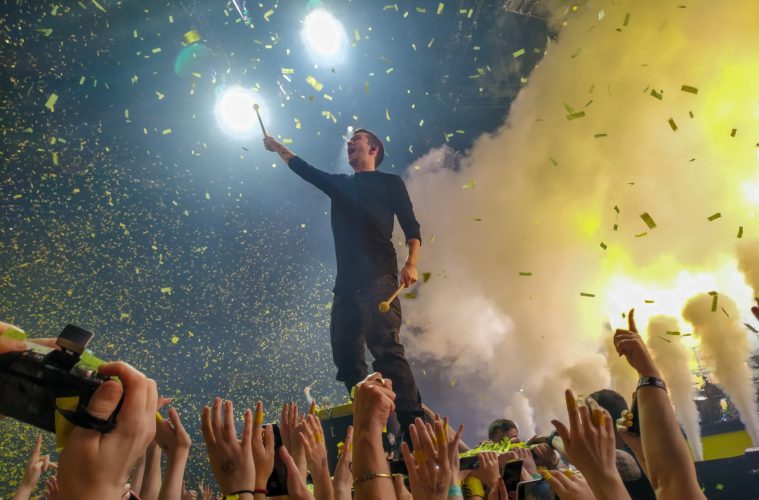 It’s impressive just how quickly a Twenty One Pilots crowd adapts to embody the new era. What once would have been a sea of red beanies and dark hands is now a hopeful burst of yellow, every fan donning at least one item of clothing that fits the unofficial dress code. Those that have been queuing all day are pressed against the barrier, excitedly chattering about how this is their 10th show, their 16th show, their 21st show. The excitement is almost tangible, everyone in the room eager to see just how well the duo will be able to fill a huge, sold-out arena with their remarkable sound.

Openers The Regrettes are perfect — the effortlessly cool punks immediately energise the audience, their sound impossible to not dance to. Lydia Night’s amazing stage presence wins over everyone, Genessa Gariano and Brooke Dickson only heightening the pure girl power on stage. Every song only solidifies their strong performance, a performance that nobody wants to end. They truly work the crowd with the confidence of a headline act, and the result is amazing.

However, The Regrettes set has to end… Which means that Twenty One Pilots are soon.

Nobody is prepared for the chills when Jumpsuit announces their arrival. The stage is quite literally aflame, fire shooting from behind a car that appears from the ground. The show truly starts as it means to go on: an absolute spectacle. Levitate only adds to this sense of awe, the flames and stage production feeling otherwordly.

What really grounds everyone after levitating is the return of fan-favourite Fairly Local to the setlist. Everyone in the crowd is singing every word, the sound bursting from their chests. There is also a lovely homage to the previous Blurryface era, the iconic red beanie being lowered into Tyler Joseph’s hands like a holy relic before the start of Stressed Out.

Despite the huge arena removing the sense of intimacy a Twenty One Pilots show once had, the Ohio pair truly do utilise it to add to their on stage banter. In order to get to their B-Stage, a huge bridge is lowered over the crowd to allow Joseph to walk to the second stage… but Josh Dun isn’t worthy of the bridge as he’s not the ‘lead singer’, so has to walk round the side of the crowd. This moment of banter is juxtaposed by the deeply moving performance of Neon Gravestones, a song that has the audience listening along in silence, awestruck. Pet Cheetah knocks the crowd back into motion, everyone clumsily trying to rap along to it’s ridiculous lyrics, Joseph sprinting back over to the main stage during the climax of the song.

The pair are also loyal to their live traditions. Joseph mounts the crowd for the bouncy anthem Holding on to You, making a bashful apology afterwards about how he ‘stood on someone’s neck’ but that it was the coolest experience ever as he could ‘feel the vibrations’ of the fan singing along nonetheless. Joseph also disappears during Car Radio, only to somehow reappear at the back of the arena, right by the top seats (something that will always mystify everyone).

As people reluctantly stumble out of the venue, everyone ducks down to grab their own handful of confetti, a souvenir to commemorate a magical night. The show may be over, but the memories will always remain: Twenty One Pilots make their mark.