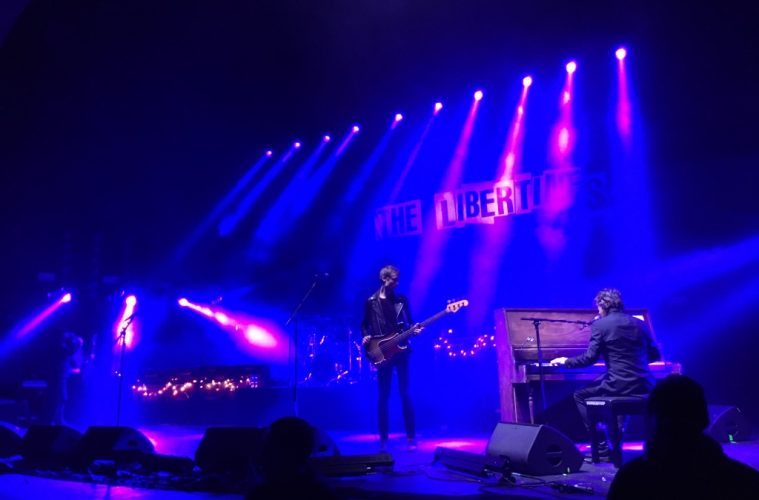 The Libertines in London is always something special – there’s a sense of mysticism that intertwines the boys in the band with the city. It’s been 22 years since they first formed here, and whilst they might not be as anarchic as they once were, they’ve become a slick band with a watertight setlist, and however much they may err into the chaotic, The Libertines are a band that’s matured into something markedly unique. The show is their last stop, a second night at the o2 Brixton before they return to their new home, Margate, and the crowd buzzes as they anticipate Peter, Carl, Gary, and John’s arrival onstage.

The tumultuous relationship of Peter and Carl is famed – once plastered across the pages of the NME and the like. The deep history they have is evident as they share the mic once again: serenading or spitting lyrics at each other with all the fervour of a jilted lover. There’s a deep, complex affection that lies there, and it’s palpable.

You can feel it in the crowd: Libertines fans are notorious for their vigour and enthusiasm, which is symbiotic with the band, and they prove themselves yet again. Carl struts like a rock and roll peacock, ready to ruffle some feathers, whilst Peter, despite everything, looks youthful as ever – big doe eyes and legs that artfully stumble across the stage like a fawn getting its footing – and as always he performs with all his heart and guts. When the band strike up a jubilant performance of The Delaney the crowd give it their all, and when Carl croons “shoop shoop, shoop delang delang” they sway along singing it right back with music hall style warmth.

The Libertines are noted for their lyrics that speak of Albion, a mythic Britain, and an affinity for poets and playwrights of old (Blake, Wilde, Chatterton), but don’t let this fool you into believing there’s even a hint of nationalism in The Libertines – just a week after the general election and Peter’s ‘Don’t let it be the Tories’ speech, it’s clear this band is anything but. The Libertines finish with – as they have many a time – ‘Don’t Look Back Into The Sun’, and the words ring true. There’s as catharsis as the lights go up – something has been exorcised once again – and the crowd filter out spirits high, chanting lyrics, sweaty arms wrapped around each other. The Libertines have showed their mettle again as a band that is always worth seeing.