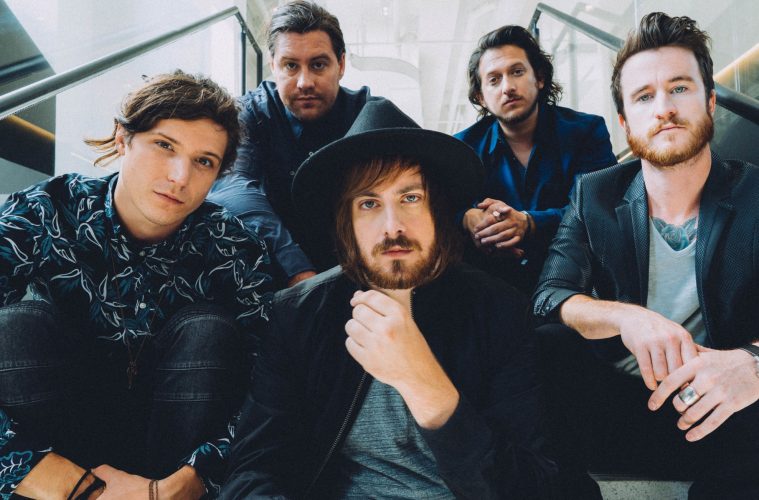 While some of us have been appreciating lockdown’s break from reality, it’s a different story for those in the music industry. Countless tours have been cancelled, and there truly is no clear end in sight at the moment. But… are there any upsides to this enforced period of stagnancy? We had a chat with Kyle Morris of The Unlikely Candidates about lockdown’s creative potential, dreaming big and the strange music video for High Low.

Kyle wastes no time, almost immediately voicing his frustration over the current lockdown; “I hate it! I’m so done with it!” he groans, “It was nice at first – I mean, we toured ALL of last year, so it was nice to just have a break, to just be home… But I’m pretty done with it now!” Annoyingly, the guys had been in the midst of a tour when the pandemic struck; “we were coming off of our BIG number one single (Novocaine) and we were finally hitting the road to reap the benefits of all that hard work… the crowds were starting to get big! It was awesome! … but then… SORRY! WORLD PANDEMIC! GO HOME! Ha, the virus doesn’t care about your success… so, yeah, we went home.” He takes a moment to sigh- “It was sad.”

Whilst it’s a shame their tours were cancelled, performing hasn’t entirely stopped for these guys – these guys wont let a pandemic stop them playing for their fans! “At the beginning, the Flatten The Hump Day streams were a way to just survive! Like, there wasn’t any unemployment for WEEKS here in the US so we were like… What are we gonna do for money?… But we also thought it’d be a fun thing to do with people! It could be, like, a nice morale thing! Then, we eventually all got our unemployment but we just kept doing it!”

These streams are pretty serious work too… well, unless they’re not. With a few themed weeks, they’re definitely having some fun with it; from Emo Week – where Kyle realised how “BRUTALLY high” some of our favourite emo icons used to sing – to their latest 80s themed stream, they’re trying to keep things fresh. “We all wore 80s clothes, ‘cause we’re, like, total dorks… But it was so much fun! I did A-ha’s Take On Me, The Cure, Tears For Fears and Def Leppard…” The commitment to outfits was particularly appreciated – most notably guitarist Cole’s brilliant assortment. “Cole killed it,” Kyle laughs, “like, he looked straight out of an 80s film. He had the bright leopard print shirt, a white tuxedo jacket, powder-blue pants… He had the slicked back hair… I was like ‘wow’ – big-time John Cusack vibes!”

But what about when the cameras are off? Kyle promises that, despite the tour-frustration, lockdown has been a creative blessing-in-disguise. In the world of music, it can often just be about “chasing the next single”, but luckily this break has allowed Kyle to let loose: “I can write stuff that I’ve wanted to write!”. The release of the brilliant High Low was also a major help – “I wrote High Low right before quarantine… so that stress to get another SINGLE disappeared – I don’t have to worry about writing the next single – I can just write cool stuff!”

We’ve got to ask… was High Low REALLY recorded in a closet? ”Yeah! It was! I mean, like, I’ve done that before!… But, yeah, this was pretty, like, janky, rigged-up my closet. It’s funny how it went from my closet to the airwaves. Whatever vibes I managed to muster in my closet ended up on the track!” We take a moment to praise how grand and expansive the track sounds, despite the confined recording space – “It’s very floaty! I haven’t really written too many songs that are that dreamy before, so that was cool!”

But… what about this ‘cool stuff’ that’s being written? Any hints? “One of them kind of does have a little bit of an 80s vibe, actually… One of them is a touch of, like, Gorillaz-type sound… and the other one is, like, soul-meets-Tame-Impala? – That one’s amazing, honestly! I think that one’s gonna be something special! And I’m, like, singing in falsetto for most of the song! I love my falsetto, but I never used to use it!… It’s been a cool weapon to, like, break out! And I just LOVE doing it! Lot of that coming up! It’s gonna be DOPE!”

The Unlikely Candidates are arguably best known for their reluctance to stick to one genre – and we love them for it! “ We kind of jump around between sounds. It’s probably, like, one of the best things about us… we’ve got a little bit of everything! Y’know, there’s a little poppiness, there’s dreaminess, there’s heaviness, edginess… like, we’ve kind of put on every different hat, just to see what we like. What we look like in that hat! Maybe I never put it back on! But it’s there! I tried it!” The common-thread that keeps the group’s sound consistent, however, is Kyle’s signature vocal chords; “I think my voice is, like, fairly distinct – so I can sing whatever and it’ll sound like us!”

We, of course, take the chance to water Kyle’s ego – the man HAS got a brilliant voice, after all! “I guess, yeah,” he laughs, a touch embarrassed, “my manager was telling me the other day – ‘anything you sing, you kind of put your stamp on it’… I’d never really thought of it that way! Like, even if I’m singing something, I kind of put my own sauce on it, so to speak. So… beyond the voice I guess I have a… signature sauce.” He smirks to himself, before adding – “I’m pretty modest usually! So, I’m not gonna beat myself up for being too cocky today, I guess!”

Speaking of cockiness – Kyle is pretty glad that his band are a modest bunch. “It’s weird when people are like SUPER cocky… Like, I remember we had the same lawyer as a certain band whose motto was basically just ‘we are the GREATEST band EVER’… Like, to say it so often that people just started to believe it? I was like… ‘Oh… okay… I’m not gonna do that, but whatever works for you.’” We quickly come to the agreement that the only acceptable time to be cocky is when you’re basically on top of the world, like Oasis – “If I was THAT close to being on top of the world, I’d probably would’ve been pretty cocky too…”

At the mention of British music, we can’t help but mention how the band have never toured over here. “We’ve BEEN to England before… Me and my guitarist, Brent, went and did some writing in England. We wrote with the guy from the New Radicals! It was cool! We didn’t have a lot of time to do anything there, but we… were there!” Kyle pauses for a second, before adding “… Brent almost got killed by a bus.”

– Wait a second. Pause. What? Kyle laughs to himself, covering his face – ”We’re just the TYPICAL idiot tourists… It was, SUPER early in the morning and Brent wasn’t paying ANY attention. And like…” Kyle sighs, “I just saw him and I was like ‘does he not see that bus that’s coming, like, RIGHT for him?’ I was like oh my god… he DOESN’T see this bus! He was about to get, like, annihilated… and I just, like, screamed…” But don’t worry – Brent was unharmed; “he heard me and like, saw the bus, and he, like, got out of the way JUST in time for it to clip the back of his suitcase.” Kyle takes a moment to shout out a very important PSA: “BE CAREFUL OUT THERE TOURISTS. ESPECIALLY IF YOU’RE DUMB!”

Rest assured UK readers – this incident hasn’t scared The Unlikely Candidates off quite yet! “That’s always been, like, one of our biggest goals: to go overseas and play! And, like, I honestly don’t know WHY it hasn’t happened yet!”

But, hey, now’s the time to dream big, right? If not a European tour, Kyle is at least hoping to do as many festivals as he can in 2021; “We finally had a LOT of festivals lined up this year! Like, we don’t do a ton of festivals, but, like, the song was taking off, so we got most of the major festivals… and then everything got cancelled! Hopefully High Low does well so we can have a little bit of clout to get back some of those festivals!” The guys have also been looking into the possibility of a “drive-in show” – the numbers seem daunting, but if they get a few “sponsors and ask people to get involved”, it’s a possibility. (There is also, of course, the notion of setting up an OnlyFans considered for a few moments).

2021 is also going to deliver something that has been long-awaited – a proper, full-length debut! “around January we’re HOPING to release our FIRST LP! And we’re gonna be releasing, like, a vinyl with it! Which will be our first vinyl,” Kyle beams. We’re sure the fans are going to be pretty excited about that! “There’s also the High Low video coming out – I went to LA to shoot it. It was really weird, ‘cause everyone was wearing masks the whole time… we definitely live in a weird time. But it was a cool video-shoot! I think it’ll be a really interesting video. We couldn’t bring the whole band out because of Corona concerns but we found a way to weave them into the theme of it that’s really funny.” – Without giving too much away, we’ll tell you that dolls are involved. “It kinda ties in with the line, y’know, ‘where did all my good friends go?’ … it’s definitely a video for the times!”

And daunting times they are – especially in the US. 15,000 new cases of Corona are cropping up daily in Texas, and the overall state of the country isn’t much better; “Our country’s definitely… in pretty constant turmoil at this point for a variety of different reasons. It’s definitely rough.” But, as bad as things are, all you can do is try! “I’ve tried! I vote! I can bug my friends to vote, we can tell people to vote on social media… We try to get people involved but… it’s up to the people, man… The whole world needs to pull in together to help us out haha! We gotta fix America!!”

As we wrap up, Kyle is eager to send out a message of hope to fans; “We love you guys – stay strong! We’ll be back soon – hopefully!!” But, of course, most importantly… “Wear a mask!! PLEASE!! Wear your masks so we can get back on tour!!”