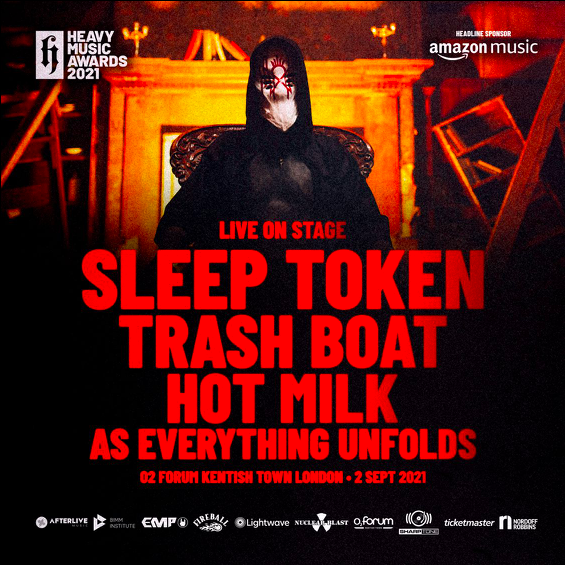 The Heavy Music Awards represent the best of the current scene again and again in their categories. Every base is covered, every record mentioned is astounding, every artist named is ground-breaking. But just to go one level better – of course, the Heavy Music Awards stage will be home to a handful artists that totally embody the excellence of this year’s rock world. On the 2nd of September, Kentish Town Forum will host performances from none other than Sleep Token, Trash Boat, Hot Milk, and As Everything Unfolds.

Fans will quickly notice that these four artists were four of the brightest (if it’s even possible to narrow it down) to take to the stage at the seminal Download Pilot event back in June, and they all gave sets suitable for such a milestone. This is going to be an evening of infinite energy, and you better have your energy ready. Trash Boat are about to release a record that’s a career-defining surge forwards, Hot Milk are finally about to launch into their year with their upcoming EP, As Everything Unfolds are breaking through and whipping up a storm. And Sleep Token, while they feel like they’re on top of their game, are just getting started with a brand-new album coming at the end of September. Heavy Music Awards have picked out an apt taster of where the scene’s off to next, to celebrate where we’re at right now.

Be part of heavy music history by watching it all go down on the night, exclusively on Twitch! And catch up with the nominees, plus who we’re rooting for, on our Bittersweet Hour special.