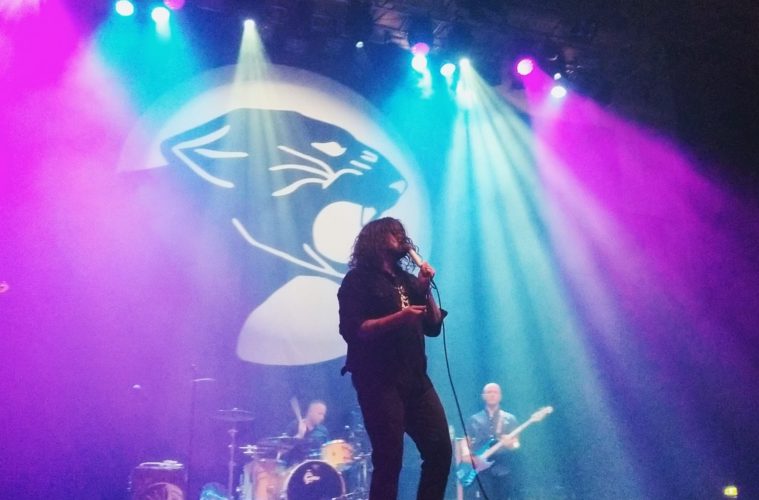 Over the past twenty years, Taking Back Sunday have played a part in everyone’s lives. Whether you were 14 when it first came out or are 14 now, we’ve all thrashed around our rooms belting out the words to MakeDamnSure at least once in our lives. And this is why the crowd in the Troxy tonight is seemingly so diverse, yet entirely united in their love of these iconic guys from Long Island.

The amazing Geoff Rickly graces the stage first, playing a selection of Thursday tracks that a number of fans in the crowd absolutely lose their minds over. He’s very aware of the fact that the combination of Thursday and Taking Back Sunday is reminiscent of a certain era in musical history, eloquently calling everyone in the crowd ‘a bunch of f***ing emos’ (a statement that isn’t incorrect). The Frights follow on from Rickly, performing an amazing set jam-packed with energy. These surf-punks infect the crowd, having every head bopping along as they twirl and pounce around the stage. Drummer Marc Finn’s happiness is particularly noticeable, his body entirely vibrating along with his cymbals.

But, god, nothing can prepare anyone for the rush of serotonin that hits when Taking Back Sunday make their appearance. With a united scream of ‘SO SICK, SO SICK OF BEING TIRED’, the twenty year celebration of Tell All Your Friends is in full swing. With every passing track you’re plunged even further into this evening of nostalgia; be it the yells of Bike Scene’s ‘I WANNA HATE YOU SOOOOO BAD’ or the exhilarating opening of ‘YOUR LIPSTICK, HIS COLLAR, DON’T BOTHER ANGEL’ in Cute Without The ‘E’, the Troxy is shaking with excitement, reflecting back frontman Adam Lazzara’s enthusiasm perfectly. It feels like Taking Back Sunday haven’t aged a day since their debut, their on-stage spirit as alive, confident and carefree as ever.

The crowd are also just as alive, moshing constantly throughout. A Decade Under The Influence, Error: Operator and Set Phasers To Stun receive particularly wild pits, everyone in the whirling mass of bodies screaming along joyously. Tracks from 2016’s Tidal Wave get just as much love as the older tracks, Tidal Wave and You Can’t Look Back welcoming masses of crowdsurfers to fly over the barrier, the love of this album only emphasising how these guys have never faltered in quality in twenty years.

By the time set closer MakeDamnSure comes around, everyone has well and truly let go of their inhibitions. Lazzara is knocking out his trademark moves, practically strangling himself with his mic-cord as he screams into the crowd, the crowd feeding off Lazzara’s performance, crashing together. Young or old, everyone is set on making this night unforgettable.

As everyone piles out of the venue, people are chattering about just how brilliant a performance they’ve just witnessed. Many crack out their phones, looking to secure tickets for another show of the tour. Taking Back Sunday are truly a fine wine; they just get better with age.