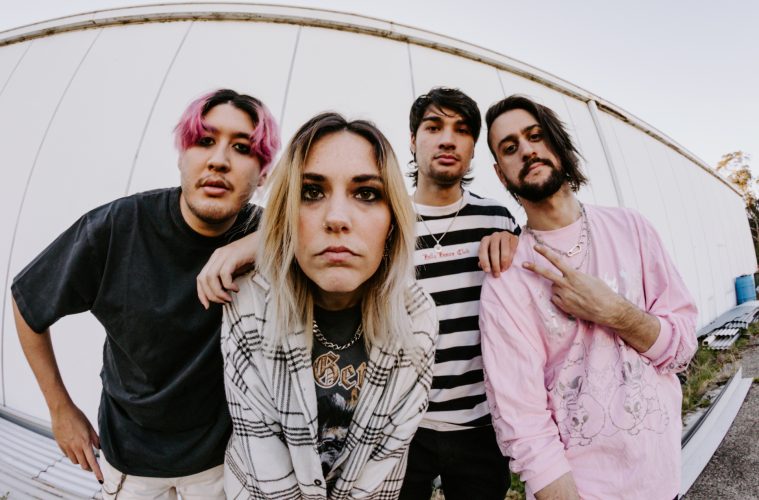 Stand Atlantic, pity party (ft Royal and the Serpent)
Hopeless Records
Stand Atlantic know how to tease an album release – practically goading us into begging for it on twitter. But it’s finally here… F.E.A.R is due out in May, and what a record it’s shaping up to be. Latest cut pity party joins molotov [OK] and deathwish in a lineup of Stand Atlantic’s most varied and most exciting music yet, and it doesn’t falter. In fact, it’s just a continued acceleration for the group. If Skinny Dipping was their bright-eyed statement of arrival on the pop-punk scene, and Pink Elephant was their swaggering announcement that they’re going to run it, then F.E.A.R (which stands for Fuck Everything And Run) looks like it’s going to be where they fully take over.

After the intensity of molotov [OK] and the darkness of deathwish, helped along of course by a nothing,nowhere. feature, Stand Atlantic seem to feel that a classic singalong anthem is in order. And with the help of Royal and the Serpent, they deliver. Tossing aside the sort of messaging that’s been all too common in the alt world for years now, Bonnie Fraser makes it clear that she has no interest in being dragged down in someone else’s chokehold, or enabling someone’s toxic behaviour. “SO FUCK YOU, AND FUCK YOUR PITY PARTY”, as Fraser and Royal and the Serpent belt out in solidarity, is a mantra delivered in ultimate style, replete with sparkling riffs and unforgiving force.

pity party might sound angry, but it’s balanced out with a lot of fun too – as is the Stand Atlantic standard operating procedure. Every biting lyric gets set to an earworm melody, and every inch of emotional vulnerability is as empowering as it is challenging. Plus it’s just pop-punk exactly as it should be done: bright, loud, and unrelenting. F.E.A.R can’t come soon enough.