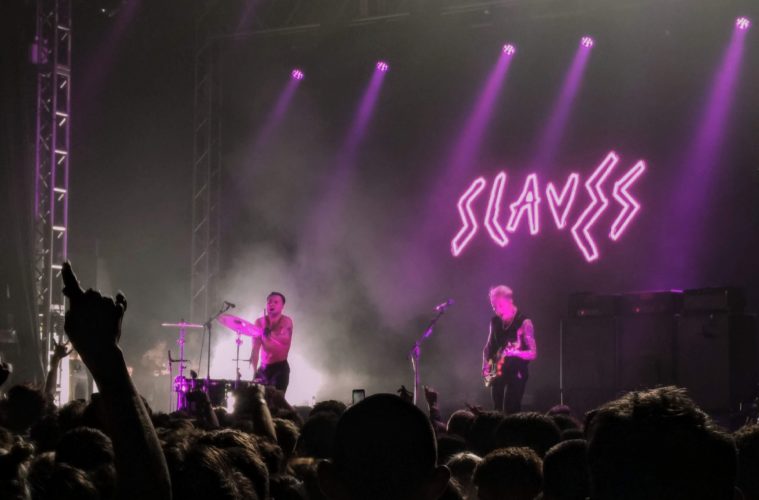 There’s nothing like a bit of punk to get the blood pumping, and Slaves are very much the kings of the scene right now. Following the release of Acts of Fear and Love in August, everyone’s been waiting for their chance to hear these new tracks live and sweat out their passion in the moshpit — and tonight is that night. You can feel the buzz of excitement as soon as you enter the Academy; everyone’s a bit rowdy in exactly the way a Slaves crowd should be.

The openers only add to this excitement. Female-fronted punk band Amyl and the Sniffers have an irresistibly cool stage presence, giving a performance that feels incredibly rock-and-roll. As for Lady Bird, you can immediately tell that they’re from the same Kent scene as Slaves. They’re the perfect support for the night’s main act, truly embodying that same punk-rock sound and energy.

Always a fan of juxtaposition, the boys play Whigfield’s party classic Saturday Night before their grand entrance. When Slaves finally appear, playing their cover of Skepta’s Shutdown, the crowd is thrumming with energy, bursting into movement. This energy follows into Sockets, the crowd all screaming along to the words they know oh so well.

One thing that is incredibly obvious, however, is just how small the venue is. Slaves deserve somewhere bigger. The crowd is never fully able to pull back a moshpit, instead opting to simply jump and shove in a big jumble of limbs. It’s particularly upsetting for songs like **** the Hi-Hat, Where’s Your Car Debbie?, Sugar Coated Bitter Truth and Beauty Quest — songs that usually have some killer pauses before the pit caves in on itself, that tension and anticipation always adding to the excitement of the song. There’s also something a bit off about hearing northern voices sing along to Cheer Up London — it makes you realise just how special and integral a cockney crowd is when seeing Slaves.

Slaves are undeniably perfect, though; considering there are just two members, it always feels like such a PERFORMANCE. Isaac Holman seemingly never stops hammering his drums and Laurie Vincent is endlessly throwing himself round the stage. The pair are also so charismatic, Holman’s anecdotes to introduce songs always putting a silly grin on your face.

Two songs in particular stand out, one being Photo Opportunity. It’s an acoustic, heart-warming experience; people are on shoulders all around the room, singing ‘WHAT SHALL WE DOOOOO TODAAAAYYYY?’ with all their might as they wave lighters along to the steady beat. Closer The Hunter shows the crowd at its very best — the pit manages to actually pull back a bit for this one, everyone understanding that this song NEEDS to have a pause before the pit pulls in on itself. There’s still something odd about hearing northern voices scream ‘THE HUNTAAAAAAHHHH’, but the enthusiasm and love for this duo from Kent is evident.

You can’t help but leave with one thought: Slaves are pretty special. It really feels like they’re the face of an upcoming punk revival and, considering the crowds they drag in, they’re doing pretty well.