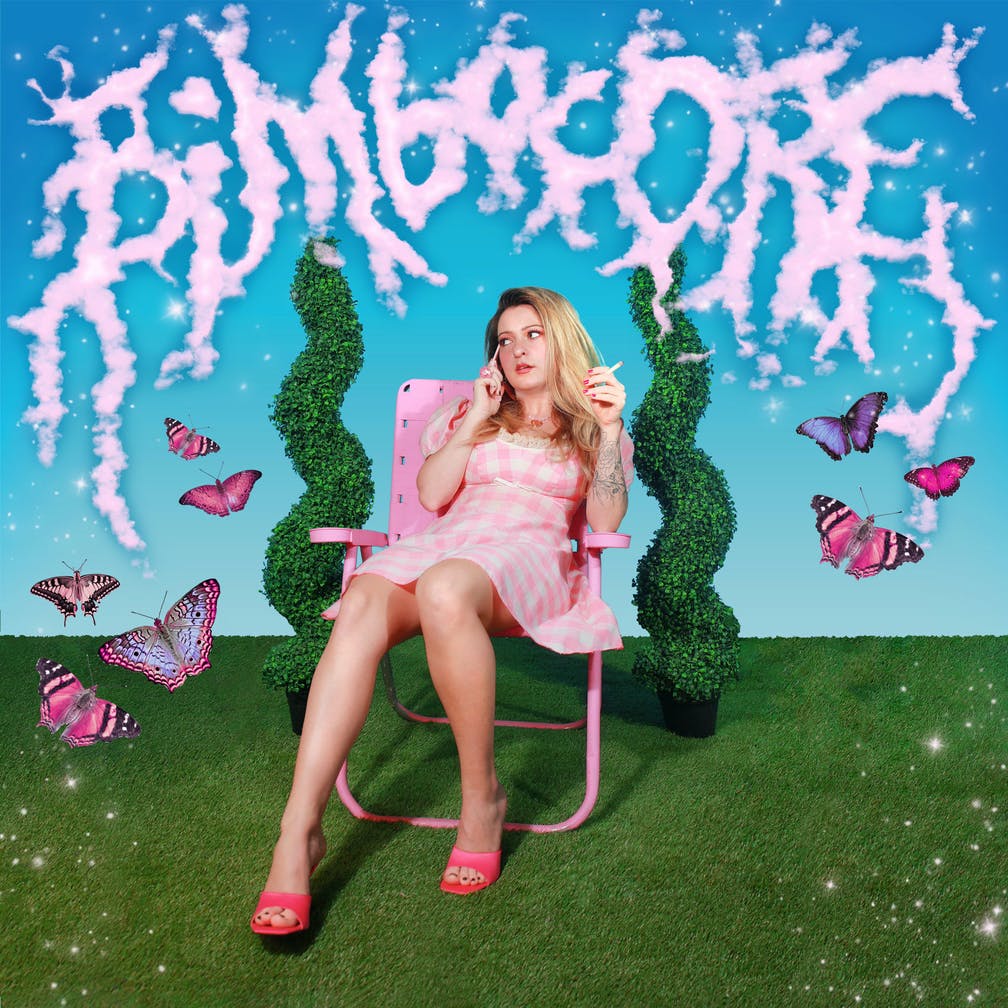 Surely everyone already knows about Scene Queen by now. She’s won us all over, she’s rallied us behind the pink revolution, she’s carved a movement out for Bimbocore and proven she’s fit to lead the charge. Right? Well, in the mode of everything new and sparkly and brilliant (and female), she’s pissed a bunch of people off doing it too. Her strawberry smoothie of metalcore, pop, and every good thing inbetween makes for fearsomely catchy tunes, and when that’s injected with the bubbly best-friend-with-bite persona of Scene Queen, it’s just irresistible.

Those who don’t think so simply aren’t Scene Queen’s target audience. Refusing to fall into either of the categories usually on offer to women entering the scene – band-t-shirt-clad tomboy or sultry, sexy, ultra-femme-fatale – all but one of the tracks on Bimbocore feature ‘pink’ in their names. That’s in keeping with Scene Queen herself: it’s the hyper-feminine, all-pink-everything alter ego of LA based Hannah Collins, for whom Scene Queen is just the latest musical exploration after penning tracks for other artists and operating under different monikers. This project is all about shoving your middle finger in the faces (or elsewhere, as Scene Queen doesn’t hesitate to threaten misogynists on ferocious Pink Rover) of people who think it shouldn’t exist.

The only song that doesn’t come with a rose-tinted label is the EP’s opener Bring It On, and seconds in it’s clear why. This isn’t as fun a romp as some of Scene Queen’s other offerings; this is a challenge, and Scene Queen is rising to it. Dark synths savagely flicker into intense riffs and growls, as Scene Queen makes a hell of a mission statement: “they hate that I’m heavy” she howls before calling on “the scene girls, they’ve got me, Christina and Britney” – yep, she’s here to do heavy, and she’s drawing on the golden girls of pop to do it. If you don’t like it…

Well, Scene Queen makes no secret of her backchat to that. Previously released single Pink Bubblegum is a delightfully teeth-out anthem, Scene Queen flat out refusing to be polite or palatable, instead “about to pop… fuck it, pop off” – backed up by her infectious melody lines and immense, bruising riffs, there’s no scrap we’re not confident Scene Queen could handle. Pink Rover is even more in-your-face in this vein: from swaggering power from Scene Queen herself, asserting her self-confidence and extoling it to girls who want to dress how they feel good, to a shattering guitar hook that descends into chaos. “If that bastard whistles put a knife up to his boner. Cut him… do you like that?” Collins snarls, fighting for herself and for every girl who’s gone through the same. Like the whole scene’s best friend and big sister, she’ll spit fearlessly what many are too scared to.

It’s not all rightful rage-fueled, though. Scene Queen can do introspection, and she can definitely do fun. The sly groove of mid-EP highlight Pink Panther is noisy, unapologetic, and sexy, and somehow it makes a grinding synth rendition of the actual Pink Panther theme tune sound seductive. Alt-pop beats and sultry delivery in the verses spell out Scene Queen’s tale of ‘girl-on-girl-on-girls-on-me’ before the stomp of a chorus kicks in, one of Scene Queen’s catchiest – but probably catch yourself before you walk around Sainsbury’s singing it to yourself.

Closer Pink Paper is similarly unapologetic, and sees Scene Queen absolutely epitomising the kind of self-confidence she’s spent the rest of the EP advocating for. Yeah, that is queen shit, delivered with charm. As a new artist who by her very nature challenges (and that’s rubbed the dwindling but definitely-still-present purists up the wrong way), and also who has utilised the beastly potential of TikTok to bounce her fanbase to stratospheric levels, Scene Queen is poised for a rose-coloured storm. We’ll be dancing in it.

Bimbocore is out now, and Scene Queen’s handful of UK dates are on sale now.