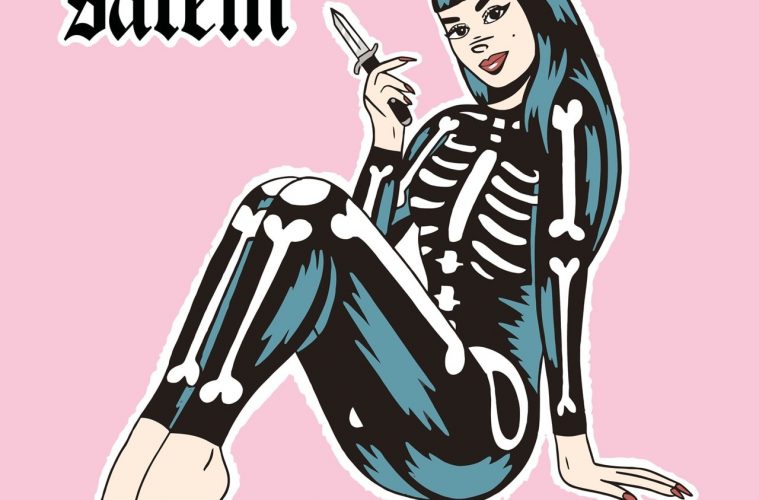 Gone are the days when punk meant rough, spiky, and dark – Salem’s debut EP is as punk as they come, but wrapped in shiny black and pale pink. An explosion of silky lyricism, immense yell-along choruses and addictive riffs, our band of the month Salem announce their arrival on the scene with fierce intent, and their very first release looks set to tuck itself away in the halls of classic favourites as some of the best, most exciting tuneage around.

It’s no surprise that Salem boasts incomparably magnetic songwriting, given that they’re fronted by Creeper’s Will Gould. Tapping into all his early horror-punk sensibilities, Gould has taken the genre to new levels with his sweeping, sexy approach – all the ferocity of the classics with a coy, adoring twist. Salem utterly submit to the forces of love and lust in a way that punk’s barely touched on before: with diamond-sharp phrases “I’m drunk just off your eyes while you nurse a flask between your thighs”, “bury me in bed with you, I wanna hang helpless from your noose”, and of course the less nuanced “punch me in the face” Salem unlock a dimension of intimacy rarely seen in punk, and pull it off flawlessly. It’s thrilling, it’s hypnotic, and it’s irresistible.

Not only do Salem have an impossible knack for writing dreamy, dark lyrics, but their energy never falters once. From the pacey opener Fall Out Of Love’s fantastical intensity to the equally dynamic closer Doomed (for each other), Salem aren’t letting us catch a breath – they truly have their hands around our throats. That doesn’t mean Salem lacks variety though – as close as they get to a typical love song, on Throat, they slow it down just a touch for a thumping, soaring tune with a chorus to rival the most long-established punk-rock icons. The consistency of the infectiously inviting choruses is what makes the debut so formidable: Gould’s charismatic vocals are so captivating that you literally cannot help but sing along, even on first listen (put Eyesore on right now, and try not to scream out “she said, boy you look like death” – we dare you).

It’s impossible to pick out any one moment as a highlight (or climax) of the EP, because it’s so unwaveringly brilliant. But Gould’s vocal delivery is undeniably the cherry on top of the twenty-tier black-iced wedding cake – the sultry confidence, loud submission, and fierce, earnest passion. Salem bring swagger in swathes, a screaming, pulsating heartbeat instrumental beneath Gould’s cartwheeling, howling vocals, as mesmerising and delicious as the scene’s greatest (think slightly scrappier Southampton Helena delivery with less death and more sex).

Salem shines so brightly because it’s just relentless, glowing, glorious fun. Breathless, rapid-fire excitement. Gould and bandmate Matt Reynolds’ revelling in sex, death (and… we’re not going to say it…) is so tangible you can’t help but sink your teeth in and hold on tight. They’ve put out a debut bursting at the seams with instant classics – only 5 tracks leaves us positively lusting for more.

Salem is out now.