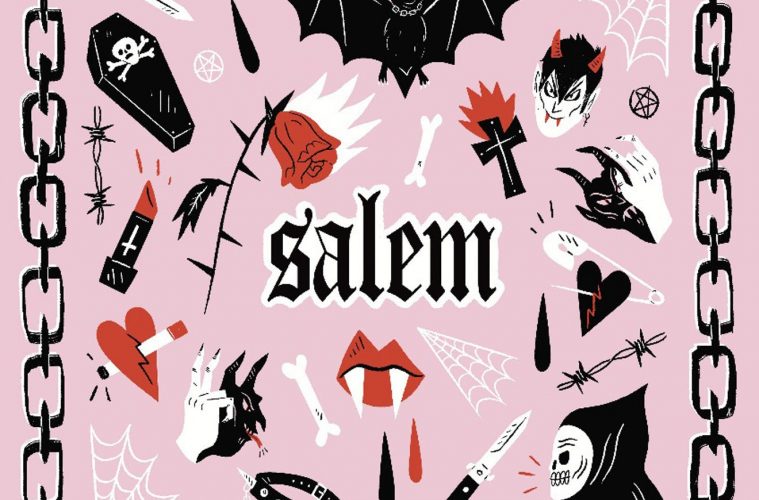 Salem have high expectations to meet – following the wild success of their debut EP (a perfect 10 from BSP!), they had fans absolutely gagging for more, and have delivered. Not one but TWO brash, voraciously thrilling EPs in the space of six months… oh Salem, you spoil us. It’d be all too easy to release an identical EP and it still be eaten up, but with Will Gould (of Creeper fame) involved, Salem II was never not going to be an ambitious development.

Salem I was a riot in a dive bar, all teeth and sharply crashing horror-punk instrumentals. And on Salem II, the band have taken some of that trademark theatricality to create something that feels distinctly different, more cinematic, more conceptual. Where the Salem I felt like a return to the unbridled energy of early Creeper, Salem II seems to deliberately wind the clock back even further – lead single DRACULADS set us up for the punchy 80s pastiche that Salem would be employing in Salem II perfectly. Fuzz, kicking drums, a gritty howling vocal delivery, giddy careening riffs, gang vocals – those are the calling cards of the horrorshow soundtrack of Salem II.

Admittedly, we didn’t think it could get any better than Salem I, but Salem II shines so much because it’s totally distinguished from anything else on the scene. At the same time, it’s a blast from the past and a dark gleaming gateway to a deliciously hellish future that we can’t wait to dive into headfirst. The thematic content, however, has remained consistent, and we wouldn’t have it any other way. Salem’s seductive poetics are as playful, silky and serrated as always, just begging once again to be screamed along to in ecstasy and transfixion. Pistols, lipstick, vampires, thorns, love, sex, death, blood, chains, altars – the soundtrack to your hot goth summer? Even when they’re spiky they’re a little sunny; from Keep The Thorns’ utterly infectious chorus to the abrasive buzz of opener William, It Was Really Something.

The hooks are ready and waiting to lodge themselves in throats, the riffs are ripe for a sweaty shove-fest in a tiny room. And Salem, on their second EP, sound even more eager than they did on their buzzing debut – they’ve pinned down exactly what they’re aiming for, and they’ve metamorphosed into something with more character and more intent. They’ve put everything Salem is through a smoke screen and a magnifying glass, whizzed it up, then poured it out viscous and black into a shot glass. Bottoms up.

Salem II is out today.