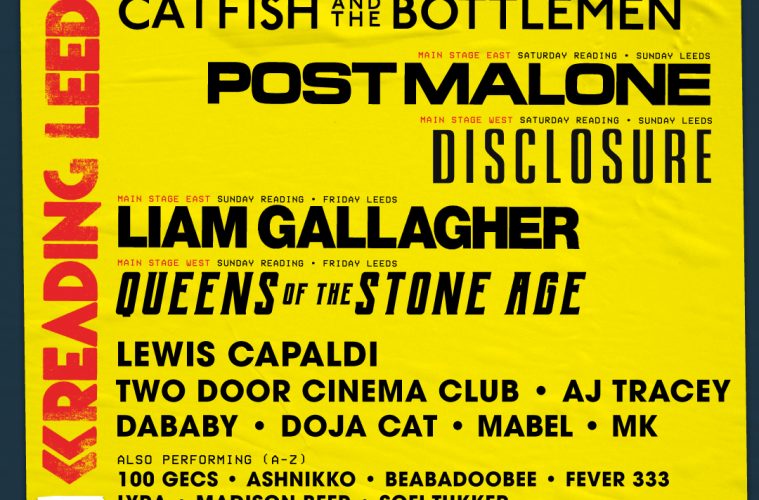 Two main stages! Six headliners! And none of them have headlined before!? Reading & Leeds organisers have made big promises for the 2021 return – but has it lived up to expectations? Well, it depends who you ask. If you’re looking for a weekend filled to the brim with iconic rock acts, then perhaps this line-up isn’t for you… but if you’re not a purist, you might be interested in the festival’s latest unconventional line-up announcement.

Let’s address the elephant in the room: the two man stages! Sorry— main stages! There’s quite a lack of gender diversity in the headlining acts this year, which is quite a shame. But at least there is the guarantee that none of the 6 headliners will clash! Though, we’re unsure how this will work – the last time Reading didn’t want clashes it resulted in a Post Malone monopoly, the rapper being the only act playing within a 200 mile radius of the festival for an hour of his set…

Speaking of Posty, he’s headlining again! Exciting!! Which is strange, considering the festival organisers said no 2021 headliners would have headlined before… but we guess co-headliners don’t count, since we’ve also got 2016 co-headliners Disclosure on the books for Saturday!

And that’s not the last of the radio-friendly vibes! Non-rock rapper Stormzy is set to headline on Friday, alongside indie outfit Catfish and the Bottlemen. We’ve also got non-rock personality Lewis Capaldi, as well as non-rock, TikTok icon Doja Cat – we’re sure the staple GCSE students will be hyped about that! AJ Tracey is also returning to teach us the chemical complexities of pasta, as well as indie legends Liam Gallagher and Two Door Cinema Club, the latter acting as a minimal reminder that perhaps ‘Something Good Can Work’ amidst the strange Wireless-esque landscape of this line-up announcement.

But who do we REALLY care about, ey? Well, luckily we’ve got a killer headline set promised from the legendary Queens of the Stone Age on Sunday. These guys are absolutely stellar live, with countless festival-worthy anthems – this is a band worthy of tackling a Reading Festival headline slot!

Lower down the line-up, Bittersweet faves Fever 333 are making an appearance! They were set to play this year’s reading, and we’re extremely excited about them still being on the bill – their energy is second-to-none, and we can’t wait to have them back in the UK. In a similar vein, alt-electropop rapper Ashnikko is also featured on the line-up, and we’re certain her slick lyrics and wild stage persona will dominate whichever stage she is set to play.

And that’s the rock lowdown! A rock band, a punk band, and a fierce rapper. That’s a total of three! Which is, as they say, the magic number – so what’s not to love!