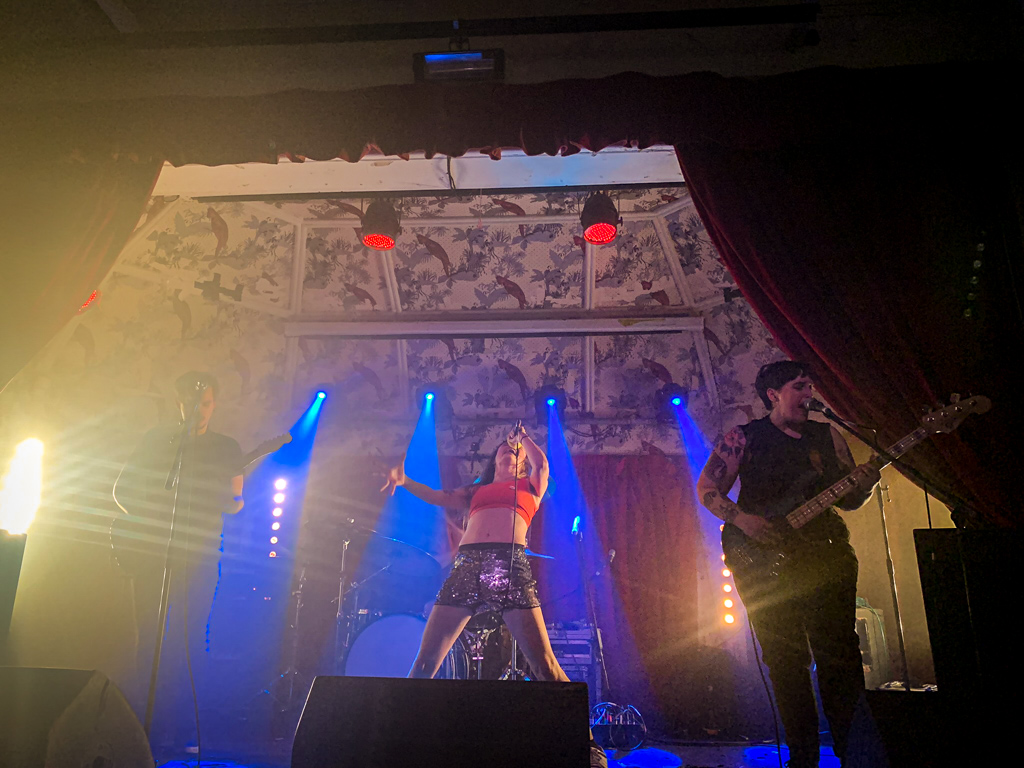 There is a blueprint for a perfect punk show. Petrol Girls have it – and if you had to make a guess at what was on it based on their performance, it would bring together honesty, unapologeticness, sheer power, authenticity, vital songs and a raison d’etre that is tangible throughout every beat. That all sounds very intense, and make no mistake, Petrol Girls were intense, buts shining over all of it (like Deaf Institute’s symbolic, iconic disco ball) is an unwavering sense of fun, and unity. We are all here for the same reason, and that is to have a good time amongst like-minded folks.

On Deaf Institute’s towering stage (it’s only a little bit higher than a normal stage, but the magical pedestal feeling is unrivalled), Petrol Girls arrive. There are two things the band tell us within the first five minutes of the show: “to be honest with you, I’m just coming out of a panic attack,” announces vocalist Ren Aldridge. “It’s a little bit euphoric, a little bit weird… it’s going to be a feral one.” The second fact is that bassist Robin Gatt quite literally arrived five minutes ago, arriving on a train from London after working a full day at a corporate job. Ren is right, everything has fallen into place right now to make this evening a delightful eruption of much-needed catharsis, but moreover, this is the first moment that Petrol Girls’s candour imbues their set with massive power – honesty about mental health, honesty about the challenges of working in a touring band right now; this sort of brutal transparency is essential in the scene’s survival, and as ever, Petrol Girls are leading by example.

After the onslaught of the opening tracks, it’s no holds barred into the likes of No Love For A Nation and Sick and Tired, which get the rage-fuelled frolicking hitting the heights with the beginnings of some moshing and hurling about of bodies kicking off in the middle. As high-energy and fun as it is, however, the pit opens straight after Aldridge has spoken about Petrol Girls’s shows as a safe, inclusive space particularly for women, trans people, non-binary people and queer people – and seems to be primarily made up of lads. This is, for queer attendees, women, and trans people at gigs, too familiar of an experience, but it’s handled. This situation is so commonplace, but it’s rare to see it handled at all, let alone as gracefully as Aldridge does – a quiet word, off stage, off mic with the moshers. “I’m not anti-dancing!” She later says, “just what i don’t like is when women and queer people, non binary people get shoved to the side. That’s who the show is for.”

Each essential, searing track comes with a painful preamble. Petrol Girls are in their element, on their platform, and are making sure that everyone gets what we’re doing here: we’re protesting as much as we are celebrating. Aldridge tells us how where she lives in Austria, there are monthly protests against femicide, to mourn and grieve and come together before launching into Fight For Our Lives – and every shred of disgust at rape culture, desperation to dismantle every level of the “patriarchal pyramid” is poured into her performance and what we, the crowd, give back. It’s heavy, but it speaks to something everyone in the room feels.

As we near the end, Baby I Had An Abortion brings something of a lighter turn – when Aldridge speaks about her abortion, after a few tentative woops, she shouts “YEAH YOU CAN FUCKING CHEER THAT!” so we do. She has us chanting “Abortion Is Healthcare!” like it’s a primary school assembly, which is ironic because the statement is such a basic, primary concept… we let all our frustration out in the three minutes of silliness and joy that is Baby I Had An Abortion. Then Petrol Girls close with a sobering peak of catharsis – screaming “touch me again and i’ll fucking kill you” in one of the only rooms many of those present have ever felt safe to actually say what we’ve all thought at times. It’s been fun, it’s been silly, it’s been real and it’s been painful and Petrol Girls aren’t letting us forget that all of those things are essential. Though some of it is dark, it’s not all dark.