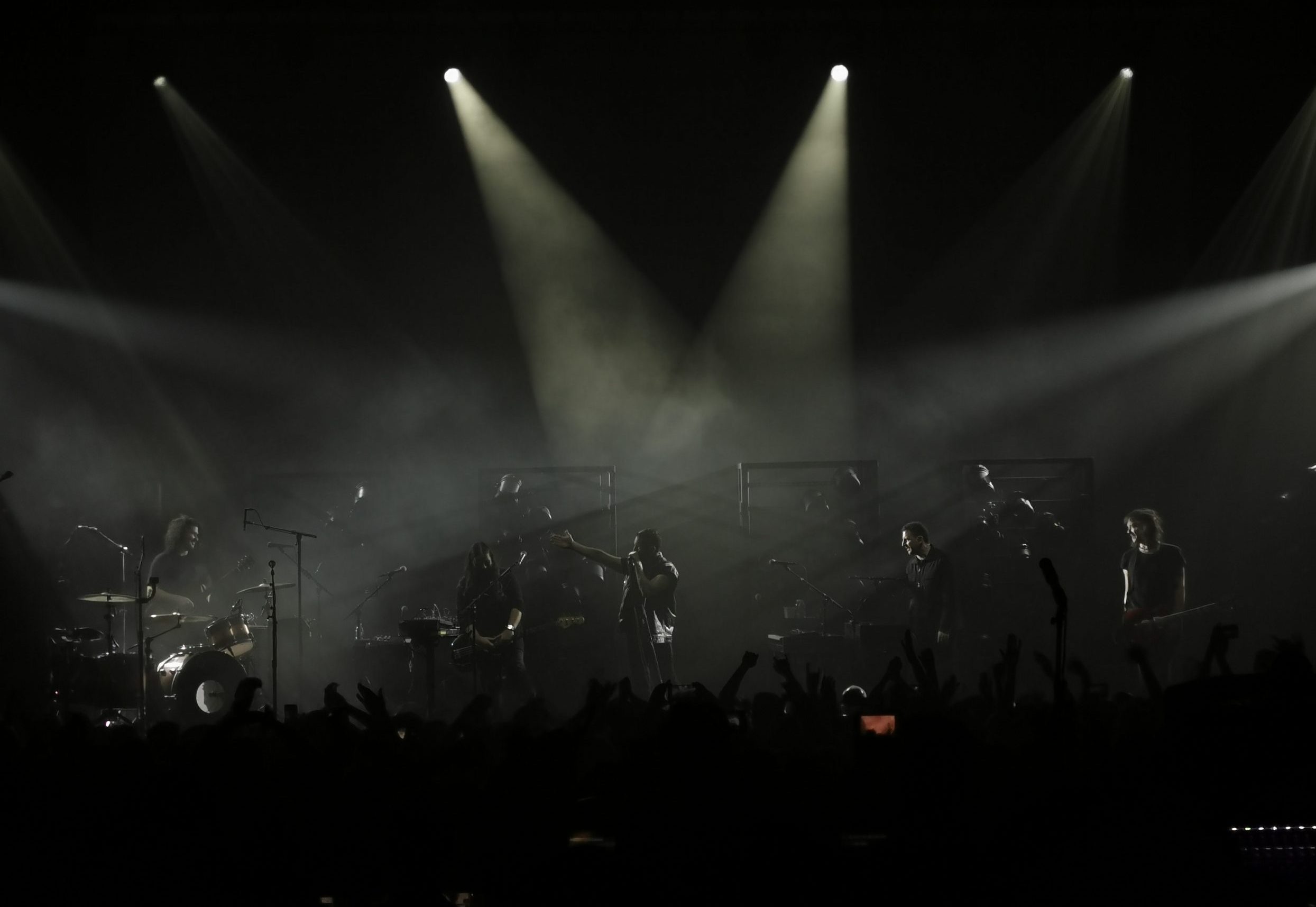 It’s been four years since Nine Inch Nails last touched British soil for Meltdown Festival – and, even then, their last official UK tour was way back in 2014. Needless to say, it’s been far too long. When the industrial legends announced a pair of Eden Project shows out of nowhere, fans collectively unleashed a howl of euphoria – but the true excitement was yet to come. As the queue trails round the block of the Manchester O2 Apollo, nobody can quite believe the spectacle they’re about to see. Nine Inch Nails in a 3,500 capacity venue… it’s really happening.

The magnificent Yves Tumor kicks off the evening, their distinctive brand of frazzled rock absolutely hypnotic. Tracks like Gospel For A New Century are intoxicating, Yves Tumor’s Prince-like sensuality totally remarkable. The set is a haze of hypnotic, trance-y goodness, very note dripping class. By the time Secrecy Is Incredibly Important To The Both of Them is closing off the set, it’s clear that Yves Tumor has put on stunning performance, the crowd mesmerised as the closing notes ring out.

But then it’s time for the main event. NIN have truly thrown the rulebook out the window on this run, and nobody knows exactly what the setlist will have to offer – and, boy, is Manchester in for a night of gloriously deep cuts. As Somewhat Damaged’s tense, building screams of “TOO FUCKED UP TO CARE ANYMORE!” open up the set, leading quickly into The Day the World Went Away, it seems that tonight is dedicated to 1999’s The Fragile. And the crowd is fully absorbed – transfixed by the pulsing, furious light show and the ferocity of Trent Reznor’s strong, biting vocals. It’s anything but Fragile, every distorted note bruisingly sharp.

As the set surges onwards, the masses are reminded of just how hard-hitting NIN’s back catalogue truly is. Wish is hell-bending, while 2008 cut 1,000,000 is a barreling, breathless rush of fuzzy, charged cries. And those guttural, wall-of-noise tracks only make the more mellow moments more impactful; Something I Can Never Have is unbearably heavy, it’s quiet, menacing piano haunting behind Reznor’s vocals. It feels like time stands still, breath collectively held.

It seems like NIN are purposefully side-stepping their bigger tracks this evening, and the fans are reveling in it. While Closer may not make an appearance, the far more rare performance of Me, I’m Not delivers that thriving, slithering dose of sin everyone is craving. And the performance of Every Day Is Exactly The Same is gorgeous, crowd echoing back “every day is exactly the same” until the next track takes command.

And that echoing, acapella feeling is recaptured on closer Hurt. The uncomfortable, needle-point anxiety of the track is chilling live, a choir of fans heightening each word leaving Reznor’s mouth. “You can have it all, my empire as dust,” hits like a sting, howls of “I will let you down” burrowing beneath your skin. It’s deeply affecting, and the room still struggles to shake itself back to life long after NIN have left the stage. It truly cements the night as one to remember – there’s a reason these guys are legends.