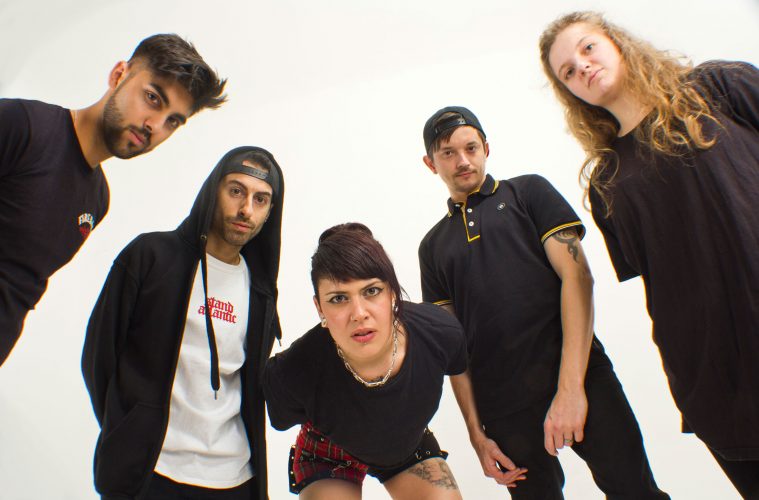 “Women are having to fight for the space they already had.” – Millie Manders on punk, her album, and politics!

Now is the time for punk – now is the time to feel angry and shout about it! Millie Manders doesn’t hold back from doing so on latest track Bitter, and she’s definitely not afraid of speaking her mind! We have a chat with the cross-genre punk extraordinaire, badass, and generally awesome frontwoman of Millie Manders and the Shutup about their upcoming debut album Telling Truths, Breaking Ties.

So for those meeting MMATSU for the first time, what a treat you’re in for – “we always brand ourselves as cross-genre punk,” says Millie of their genre. “We’ve got a very punk attitude and ethos, we’re very outspoken, quite political, we talk about a lot of different world and environmental issues and a lot of our songs have got that hard edge of punk, but we’ve got loads of other influences – pop-punk, ska-punk, nu metal, heavy rock, and Dom [horns] is predominantly a jazz player and brings quite a lot of jazz flavour.”

Punk has a magical knack for turning negative emotions into sources of huge power, and Millie’s music certainly does that. “It’s not an aim to make it uplifting, but I’ve never been one for melancholic music. I’ve always been into stuff that’s energising. But even though Bitter is very bouncy I feel like there’s so much rage that comes out; I’d hope to see a mosh pit to it, get people feeling that aggro and pushing that out.”

In their subject matter, Millie knows no bounds – if it’s getting felt, it can be written about. Millie describes recent single “Your Story is a literal whirlwind romance where I ended up being a rebound and I would see them on their Instagram stories. It’s a literal representation of a scenario. When it comes to [other tracks], I’m vegan so I’ve got a real thing about zero waste, the murder of very sentient beings, and the rape of the planet in general. Politically I’m very angry, I’m angry about the lack of equality and the need for Black Lives Matter and Me Too. So those songs about the NHS and mental health services and homelessness come from very real anger. It’s cathartic! It means I’m processing some of that in a way that’s healthier than being an outwardly angry person.”

Millie’s favourite track off the album is one of these political bangers – “it’s a controversial choice because the rest of the band would not pick this track, but Poor Man’s Show is my favourite. I started writing it three years ago when the Tories really really started to destroy the NHS, there were stabbings every other night, police brutality, so many awful things and that hasn’t changed, it’s still going on now and it’s getting worse. So Poor Man’s Show is a story about my anger directed at our government. I researched it quite a lot, I was writing a note of all the things I was angry about like I want to put this in one song, then wrote it on ukulele then full band.”

What’s it like approaching a debut album release in these times then? “Nerve wracking! Frightening! Am I doing enough? Having I done enough? What can I do more to try and engage people and get them involved in the album, can I sell more preorders? What if people don’t like it what if it isn’t a success? What if it falls flat on its arse and it’s our first baby? But I actually think I’d be more scared if we had a tour coming cos I’d be pouring so much time into promoting the tour as well. Obviously I’m lamenting the loss of an album tour, but I would be a lot more scared right now. I’m a worrier and a very anxious person so fear level would be up here!”

Touring is still something on Millie’s mind, for sure, but there might even be some non-covid obstacles to performing – “We did three songs onstage last weekend to be streamed, literally just three songs and by the end of it I thought I was gonna die. I couldn’t breathe, my lungs felt like they were on fire cos it was the first thing that we’d done since the 7th of March. There was no way we could have done a whole set, so if touring actually starts again in November I have no idea how we’re gonna get ready!”

Women in punk are de-facto incredible, but unfortunately, it’s a scene that could definitely be more welcoming. “It is a lot easier to be a guy in a punk band. A band with five guys will be given a slot without question, and they can be pretty mediocre and have quite a big fanbase quite quickly. On the flipside of that I’m also finding a trend with all girl bands, a brilliant trend, with them being signed to indie labels quite quickly, but where does that leave women in mixed bands? There’s this gap we fall in and we don’t get gigs thrown at us, we certainly don’t get signed very quickly. When you’re a girl in a band, you have to be ten times better than every man on the scene in order to equal them. If you go back to the sixties and seventies we look at people like The Slits and Deborah Harry, there was a real thing for amazing strong women in punk. And now women are having to fight for the space that they already had at one point.”

So with that in mind, who else can Millie recommend to us? “Stand Atlantic, Hands Off Gretel, Dream Nails, Dream State.” Just a select few of the amazing artists that feature on MMATSU’s Badass Punk Ladies playlist – check it out here.