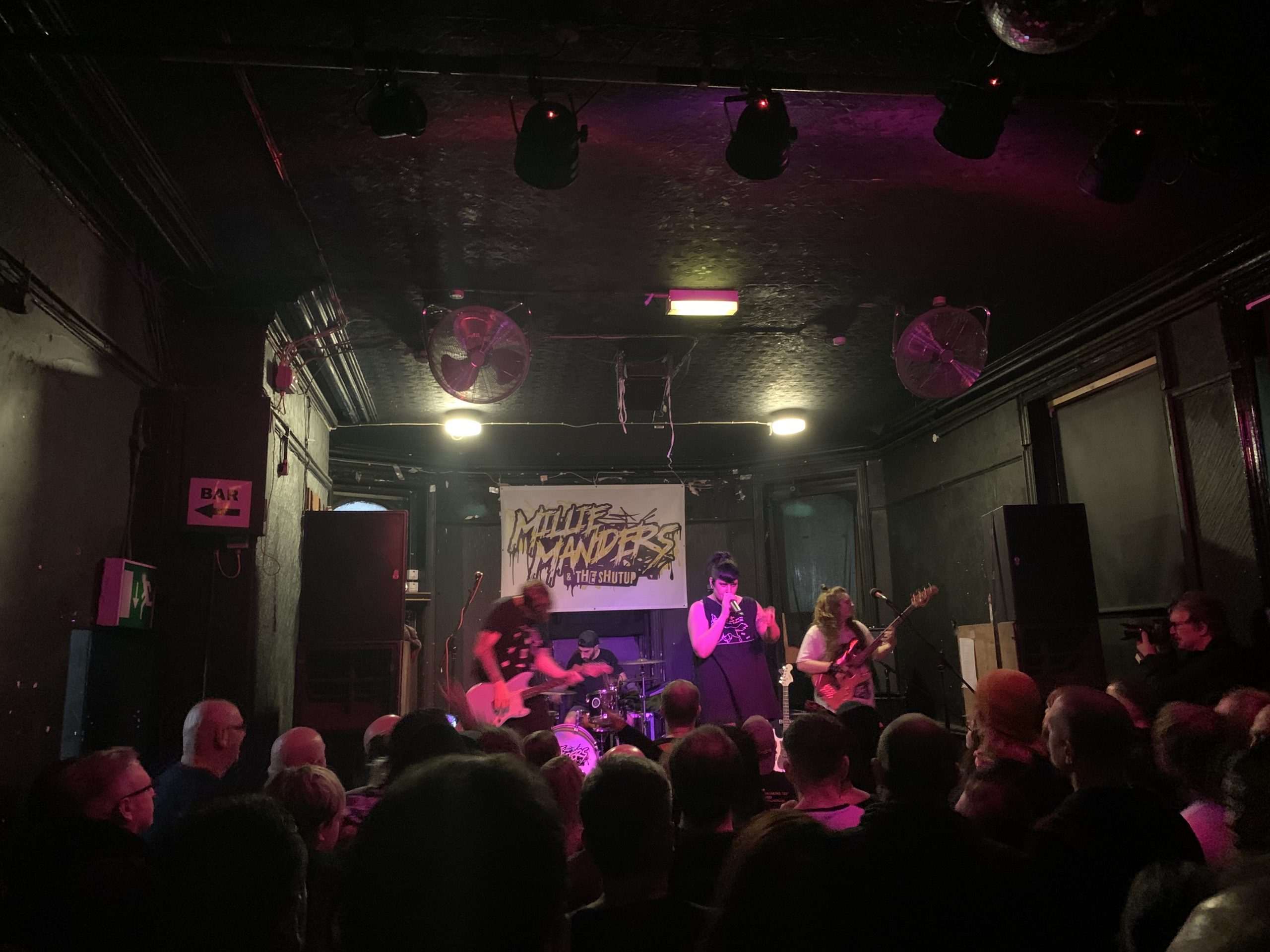 From the outside, Manchester’s iconic Star and Garter almost looks like it could be closed – the front door is shut and locked, and the lights in the windows are dim. But this is for a reason that’s definitely not the pub being closed and quiet – Millie Manders and the Shutup have sold it out so hard that the pub is actually not letting anyone in to the downstairs bar at all. This is an exclusive event, a friends punk party, and it’s one that we’ve all been waiting for a long time too. Telling Truths, Breaking Ties came out all the way back last October, and we’ve been waiting to go wild to it ever since, and the night has finally arrived!

We’re treated to a real showcase tonight, too – Jora the Fortuneteller, who’s been touring with Millie and co, is joined by local acts Dragsters and The White Ribbons, who all kick things off in fierce style. Across the board, it’s all sheer energy. Bringing out and showcasing local talent isn’t just one consideration MMATSU have taken on this tour, though: they’re also the first EVER UK tour to sell merchandise through Hawkr. It’s a virtual showroom accessible only via an app whilst your inside the venue, with exclusive designs and colourways for each show, printed to order to avoid leftovers – sustainable, and super special.

And super special goes for Millie’s performance too. In between raucous dancing to the ska-punk inflections in the party-ready setlist, she’s got a lot to say, and it’s all resonant and so important to hear. Mental health sits at the forefront of Millie’s in-between-songs chatter, whether it’s an impassioned introduction to Glitter Mix which she says she wrote for a friend, or the rousing battle cry of a mission statement she gives towards the end of the show to cheers of agreement from the crowd. “Whatever it is can be as minor as a knee scratch, it can be as major as pneumonia, it doesn’t matter. You should be able to say I’m not feeling right today and be respected for it.” Not Okay, MMATSU’s anthem in this vein is a poignant, elated moment of catharsis for all there. Silent Screams is another climactic moment, closing off the show with Millie’s most essential, and perhaps most personal track too.

Not limited to mental health, searing political ukulele banger Poor Man’s Show sees a huge response – “fuck the Tories” shouts get a response of “it’s not just the Tories, it’s all the government!” followed by a descriptor even more explicit and even more vehemently agreed with by the crowd. Mental health, politics, ska-punk catharsis, and fun – everything Millie and co do and say tonight is essential and perfectly pitched. And Millie’s delivery makes it all the more captivating, with the most powerful belt we may have ever heard slipping easily into jagged spoken word, which effortlessly dissolves into an explosion of trumpets and riffs.

The show doesn’t end sharply – Millie announces that they’re not bothering with any encore rigmarole. Three more songs, and that’s our lot! But it’s not our lot, because the end of Silent Screams turns into a mega group picture which turns into a hug fest between the band and the whole crowd – the perfect ending to a triumphant show.