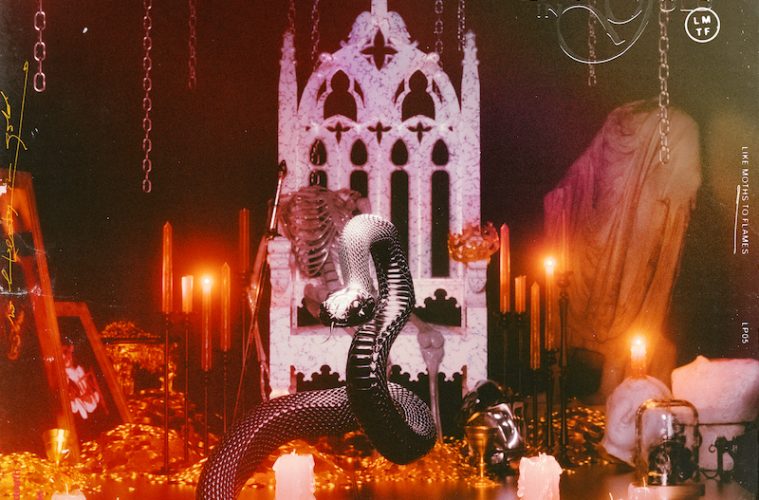 Like Moths To Flames, No Eternity In Gold
UNFD

Like Moths To Flames are somewhat of a heavy staple at this point – you won’t get far into a discussion of metalcore without their name making an appearance. And it’s clear why; with a drive harsh enough to quicken your heartbeat, LMTF deliver some of the most exciting moshpit anthems around. No Eternity In Gold upholds this fierce standard, whilst also hinting at a matured ability to craft lighter tracks that are equally as raw and heavy-hitting.

As brutal drums and pulsing instrumentals crawl into your ears, Chris Roetter’s visceral call of ‘BURN WITH MY MISERY!’ marks No Eternity In Gold’s beginning. The Anatomy of Evil’s gorgeous, impossibly quick drums drag you, body and soul, into LMTF’s world. Following track Habitual Decline only carries on in this vein, the embodiment of wild, heavy, hectic drumming enhanced by those gruelling vocals – coming to a head with one final GROWL, before floating off into ethereal bliss. LMTF are truly flexing their ability to be unrelentingly loud in these opening tracks.

The truly impressive side of this album shines when the band start to play with their layering, however. While tracks like Fluorescent White are undeniable circle pit pleasers, the maturity of the band is shown in their moments embracing their lighter side. YOTM marks a shift in the record, opening a floodgates to some brilliantly rich, layered tracks. Whiplash-quick, ferocious verses contrast with choruses that sound like they’d fit in on an album by The Used – yet the contrast only emphasises the heavier moments throughout the rest of the song. Killing What’s Underneath also feels refreshing, with a lighter start that slowly builds up to loud, growling bridge. This embracing of lighter sounds allows the group to stop over-saturating their heavier sounds, resulting in a much more mature feel – you can’t guess when the next batch of gruelling drums will hit, when the next growl will pierce through your skull, and it makes the listening experience much more exciting.

Song structures and also become more intriguing in the latter half of the album- A Servant of Plague plays with time signatures, making each moment unpredictable, leaving you hungry for more, more, more. Selective Sacrifice is an undeniable album stand-out for very much the same reason, absolutely exhilarating from start to finish, never faltering for a second – and those brutal, full-bodied growls of ‘DEATH, IT NEVER SLEEPS UNTIL YOU’RE OUT – OF – TIME!!’ followed by an absolutely sick instrumental breakdown? Glorious.

Closer Spiritual Eclipse is also great proof of how LMTF can pull off some fabulous, interesting time structures. With some absolutely juicy metal guitars and pounding drums, this is a track fuelled by raw grit and angst – perfectly balanced out by clean vocals proclaiming ‘left to rust! Disintegrate!’. Vocals speed up to near-rapping speed in parts, before morphing into thick, emotive growls, truly highlighting Roetter’s vocal abilities. This is a track that is defined to perfection, sending you off with some powerful, harrowing final growls of ‘NO. E-TERNITY. IN GOLD.’

Overall, Like Moths To Flames have captured a pretty solid balance here. With their toying with layering, and embracing their darker vs lighter sounds, No Eternity In Gold has some truly masterful moments. It’s fair to say that these guys have struck gold with this one – if you’re looking for a little burst of metalcore to spruce up your day, this is an album that definitely should not be missed.

No Eternity In Gold is out now via UNFD. Get it here.