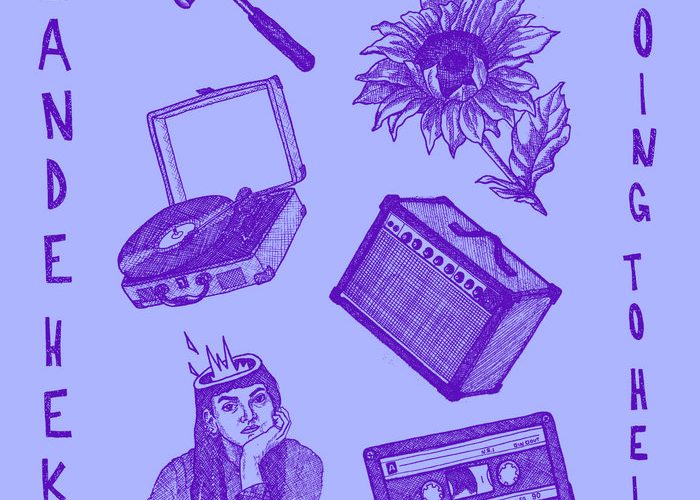 Debut albums are windows to the soul, terrifying to bare to the world – even when, like Lande Hekt, you’ve already got a firm back catalogue with well-loved punk outfit Muncie Girls. Hekt is breaking off to delve deeper than ever, giving us Going To Hell: a gorgeously confessional musical tale of coming out. It’s a deeply personal listen, but Hekt manages to balance the depth with lighthearted (albeit melancholy) riffs and lyrics that are as subtle as they are stark.

The record is a seamless mixture of punkier-leaning tracks built on gentle riffs and DIY textures, and slower moments of ethereal introspection. Altogether, Hekt’s musical ups and downs flow in just the same way that life does, wrapping you up in her world without even trying. It might be a personal record, but there’s definitely still glorious moments with the potential to be played loud in a festival tent – lead single Whiskey’s slow-building buzz, the ironic sunniness of December, the beautifully Cure-y Stranded, to name but a few. Hekt’s delivery is always intimate, though, which maintains the wonderful vulnerability of Going To Hell even when her instrumentals are bouncing around.

What Hekt also proves on Going To Hell is that sometimes, quiet is even more powerful. The record’s acoustic tracks make up for a fierce proportion of the album’s most tender moments – the triple bill that closes the album, of Candle, Going To Hell, and In The Darkness are a piercing set. Candle employs similar tactics to those that have seen Phoebe Bridgers catapulted into the limelight, but even more evocatively, with a string build and intrusive lyricism building a hazy, blue soundscape. The latter two tracks are both acoustic guitar numbers with understated vocals that are despondently hopeful, thematically hard hitting, but also, somehow, comforting.

On Going To Hell, Hekt has confirmed once again that her deft, explorative songwriting expands beyond any confines. GTH is a masterclass on how to build something seemingly held-back and gentle into an emotional heavy-hitter, that still feels like it could nestle right into your heart. Hekt’s told this story now, and she’s told it exquisitely – we just hope there’ll be a sequel.

Going To Hell is out tomorrow.