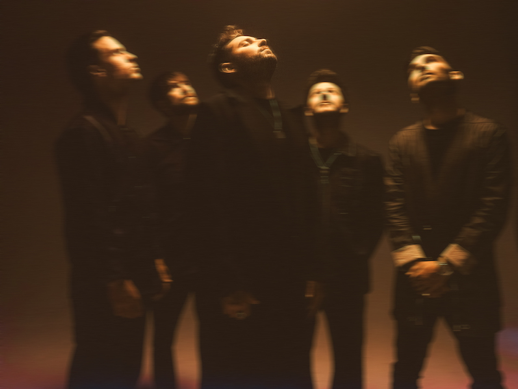 You’re in a stuffy, sticky toilet cubicle. The room is spinning a little, but if you close your eyes you manage to just about plonk down onto the seat. As you wee, you can hear the muffled sound of various emo tunes through the wall… But suddenly… What’s that? “Keep your hands to yourself…!” Sobriety hits like a truck – MAKE WAY! I’M COMING THROUGH! Your NEED to sing along to Save It For The Bedroom in a crowded room far outweighs any previous need to urinate.

Give us any You Me At Six tune, and the resulting response is very much the same; singing along to You Me At Six is second nature, a carnal need that we have no choice but to satisfy. You Me At Six are a band that never let us down, from their reliably joyous live shows to their faultless discography. With new album SUCKAPUNCH out on Friday, there really is no other option for our Band of the Month!

You Me At Six have released some of our favourite albums here at Bittersweet Press, and it seems like SUCKAPUNCH is going to be yet another solid instalment from the guys. From MAKEMEFEELALIVE to Beautiful Way, this album already feels like a brilliant burst of Adrenaline (if you’ll pardon the pun). SUCKAPUNCH feels like the band’s most ambitious release to date, while still embodying that iconic, anthemic YMAS energy we all adore.

The guys sadly had to cancel their socially distanced release shows, but that doesn’t mean they’re not welcoming in the new album with a bang! Starting Thursday 6pm GMT, the YouMeAtSixOfficial Instagram will be put on private, and a sneak preview of each track will be posted every half hour until the midnight release.

On top of that exciting countdown, Saturday 16th will bless us with A Virtual Evening With You Me At Six – an evening that will include the documentary of SUCKAPUNCH’s creation, a Q&A with the band, and some footage from the guy’s awesome Gunnersville headline set last year! This is available to anyone who orders SUCKAPUNCH from the YMAS store before 4pm GMT on Saturday – so grab yourself a copy while you can!

It’s fair to say that January is going to be pretty You Me At Six heavy, and the guys are truly starting the year as they mean to go on. The guys have also got a May tour in the works AND some July Hold Me Down anniversary shows – 2021 is going to be a big year for Sixers everywhere. But, hey, we’re definitely not complaining!!

Pre-order SUCKAPUNCH now. And grab some tickets to see YMAS this year here!