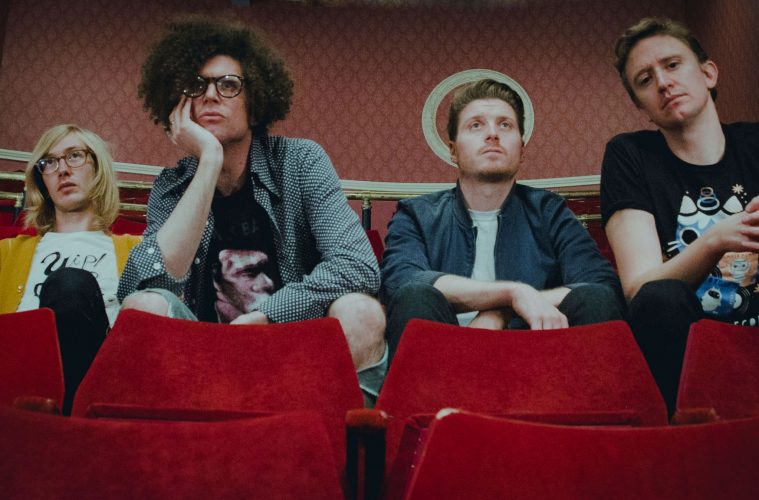 It’s a strange time for Asylums in more ways than one. Of course, COVID-19 is the universal disruption in everyone’s worlds, but for Asylums frontman Luke Branch, there’s also adapting to being a new father, pressing pause on life for the first time ever, and gearing up for the release of Asylums third album. To call it their most ambitious would be a disservice to Killer Brain Waves and Alien Human Emotion; Asylums are perpetually ambitious – but with the prestigious PRS Momentum Fund and the production clout of Steve Albini behind them, it’s definitely a landmark. We had a chat with Luke all about it.

For any band, it’s an unusual time to be releasing music, but for Asylums it felt essential: “a lot of things unfolding in the world are very thought-provoking, in a good way and a scary way and it seems legit to put out the messages on the record, time to speak about some things. We’re total pop culture nerds, we soak it all up, so it just felt disingenuous to be like we love all this but we’re not gonna put it out so we can make an extra couple of grand later, who cares, fuck it.”

We all need art at a time like this, but Genetic Cabaret strikes the perfect balance between resonance and distraction. Drawing inspiration from the politics of the 1980s, Luke has tried on GC to “anticipate what would happen now over a ten year period, what might happen. It was gonna be more reflective, I married the interest in that period with an interest in the city architecture, specifically London.” What sounds already like a wicked, 1984-turned-2084 concept record was yanked back to earth by some wonderful news for Luke: “I found out that my wife was gonna be having a baby. I’d just finished all the music and I was finishing the words and then it became a record about the world as it was at that time. Some of those observations have been amplified, it was about trying to accept that you’re bringing this beautiful baby into the world and you’ve got to reconcile that with how depressing aspects of the world are. It’s called Genetic Cabaret about what my dad passed on and what I’m gonna pass on.”

Genetic Cabaret, then, has taken on the all-new dimension of channeling Luke’s impending fatherhood and watching the world become what it is today, and it’s been a long road for him. “I really had a pained experience trying to get to the point of being OK with having children, not because I didn’t want children but I have good days and bad days… so it’s a bit of soul searching and then it all happened and I was so happy.” It’s been as far from a smooth journey as you can get! “The timeline is so weird,” Luke explains, “we finished all the demos, finished off in March, recorded it all in August, baby was born in November then in December we’re in Abbey road mastering, January promoting. I thought it was gonna be so intense, so in a way… it’s nice to have time with my son.”

The Asylums lifestyle is definitely not one conducive to spending time with a new baby: “it’s a panic from the moment I get up to the moment I go to bed every day, we have day jobs, we run the record company [Cool Thing Records] and then we do the band and you try and fit your life in around it. I’ve never had a period where there’s this much stillness, I just feel OK, I feel good, I’ve just never experienced it before.”

The current stationary lifestyle might be a new thing, but Asylums are two albums and hundreds of shows deep. There’s new pressures that come with every aspect of it, but did Luke feel any pressure going into album three? “My value system doesn’t really go there with that kind of thing. I write every day, the boys play all the time, they’re really into musicianship. I personally knew what record I wanted to make third when we were putting the second one out so it’s been a long journey to realise that vision. Third albums can be a time when you consolidate what’s good and add a few new things to the fray, there’s some of the fury of Killer Brain Waves and some of the sensitive soulful stuff, and it feels like a record not a collection of singles.”

Lending his musical heavyweight reputation to Genetic Cabaret is the incredible Steve Albini (In Utero, need we say more?). “It was amazing,” says Luke. “In my lifetime I probably have more Albini recorded sounds than anyone else, I’m a big fan of his ideology, it was a musical pilgrimage of some description. When we got there it was not only wonderful to work with Steve but to soak up all the music history, there were like, messages from Fugazi on the fridge! At the end of the recording session he said, “Luke, you’re a really good singer, and one day you’ll realise”, and I could have just evaporated out of the window at that point.”

Genetic Cabaret as a part of Asylums’ catalogue then: how does it fit in? “Well, I tend to pick songs that either scream US or sound like us going in a different direction and I tend to leave things that really don’t suit us. But on Genetic Cabaret, A Town Full Of Boarded Up Windows is one of the more experimental songs for us but I feel really strongly about the theme – my town IS boarded up, everything’s fucked and everywhere we go on tour we see it. So it’s not like I’m trying to sound different, it’s just important to do something different. I really like one track mind records like Never Mind The Bollocks and Nevermind, but even Nevermind’s got some soulful moments!”

Asylums’ albums push their boundaries, but even the tracks themselves are straining at the edges and ever-growing. Luke describes how they’ve become what we hear on record: “by the time we record them I don’t feel like I wrote them. Everyone’s put their stamp on it, we just add to them, the guys bring stuff in that takes it from feeling more linear. The fun thing about collaboration is the surprises that crop up.” Would Luke ever try and reign an idea in? “A piece of work wants to be what it wants to be. I was most nervous about The Miracle Age, we nearly didn’t record it cos that’s a real departure. We recorded that with loads of jetlag, we can’t even remember playing it and we just listened to it once and we were like fuck did we just make that!? I was really glad to have been bold on it. The four of us are the consisten thing and whatever we do normally ends up sounding like the four of us. If it ends up different it’s different rooms in the same house.”

One thing that stands out about Asylums is how well named their metaphorical houses are – even the tracklist of Genetic Cabaret has countless golden nuggets of track names. What goes into masterminding these names? “It’s pretty symbiotic. I’ve got a list of 150 pieces of music on my wall but a lot of them are just named numerically but then on the other wall I’ve got loads of titles, what works well for me is the accidental moment where you’re playing and then you spot something and it becomes part of what you’re doing. It’s a good way of not getting writer’s block as well, what’s that Charles Bukowski quote? “Don’t try.” He was a misogynistic prick but he was a good writer so that’s good advice.”

Asylums don’t just draw the line at being a sick band – they’re also the beating heart of Cool Thing Records. “We’re not anti-major-label,” Luke says of what makes Cool Thing special, “but we recognised early that the kind of label that would suit our band would be one that had that kind of DIY ethos. You’re up against all the other music in the world and that’s the challenge, but behind the scenes you’re with forty people that are all in touch with each other and it’s all coming through your brain all day and that’s a stimulating way to exist as an artist and I don’t yearn for anything else.”

Genetic Cabaret is out this Friday.