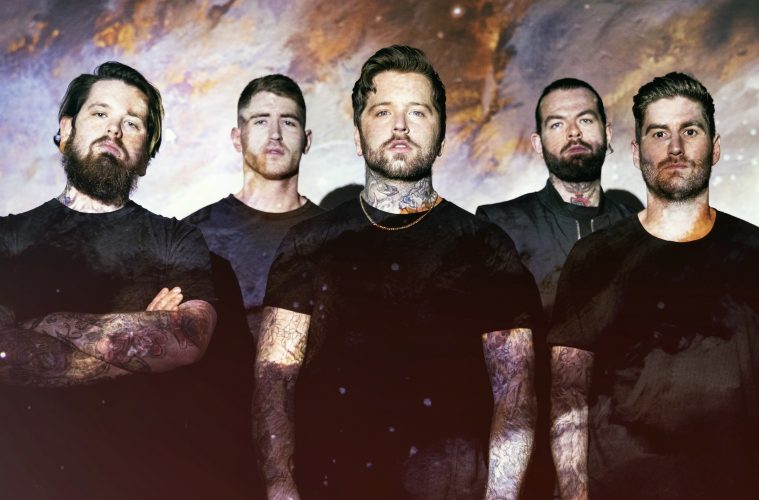 On Friday the world will finally get to hear Bury Tomorrow’s sixth studio album, Cannibal. It’s been a pretty tense wait, especially considering the release date was pushed back by three months. In the final few days before the floodgates are opened, we had a chat with Bury Tomorrow’s own Davyd Winter-Bates about the album, as well as how he’s coping with a life without touring.

We can’t begin without addressing the elephant in the room: lockdown. It’s a time that Davyd describes as “exceptionally odd…”, which we would argue is putting it lightly! “I’ve been in a band since I was 16, so for me this is the weirdest experience ever – to not even be able to play a LOCAL show, let alone anything else.” Though this was meant to be a busy time for the guys, Davyd is keeping sane by erasing the cancelled schedule from his mind; “from the moment I was told they got cancelled, I completely stripped any of them from my mind so I didn’t do the whole ‘ohhh, this should have been Download, this should have been Slam Dunk…’ – just ‘cause it would depress me! I’m trying to just get through the year as QUICKLY as possible so that I can get in front of people and play music again!”

Festival cancellations have been a tough time for everyone it seems – even we’ve been feeling the strain, and we’re definitely not touring around the world like Bury Tomorrow should be! “It’s kinda like, I think from our ‘scene’, we plan so much of our year around the hinge-points of festivals and shows, that you kind of forget how much of a social aspect it really is! … You know, in festival season – friends from other countries, we’re able to tour together, hang out… And now, it’s gonna be ages til I see any of them!”

One thing that Davyd hopes can come out of the global concert-draught is a mightier thirst for live shows. “I’m really hoping that what this does is it gives live music the resurgence it was waiting for! I mean, for a long time, it’s been on the decline. And I’m HOPING and praying that, when this is over, people will want to consume every piece of live music they possibly can! Hopefully it puts bodies back in shows!’

But, in terms of lockdown, how has Davyd been keeping busy? Well, by streaming, of course! “It’s the closest thing I can get to playing a show at the moment,” Davyd laughs, “I mean… the best part, what I enjoy, is the interaction with people. I like having that – an immediate reaction from someone. I think that streaming gives you that. It’ll never be quite like a full-blown show… You know, I don’t think I would ever, you know, quit the band and become a full-time streamer.”

So, for anyone worrying about Davyd leaving the band to become a full-blown streamer, that’s definitely not on the cards – he misses the live circuit far too much to ever give it up. “I get REALLY tour sick – I will ALWAYS get tour sick, even when we’re in a good year. I just always wanna be on tour! And, I know when I haven’t played shows for a long time.. Right now I haven’t played shows for like EIGHT MONTHS so… Yeah, I’m feeling a little bit like an addict, waiting for my next fix!”

Even though the guys are gutted they wont be able to perform for the foreseeable future, they’re grateful to be in a position where it’s not going to impact the band horrifically. “It must have hit so many venues, festivals and bands! Luckily we’ve been very blessed to be in a position where we’re just kind of… sitting twiddling our thumbs. That’s the only thing it’s affecting, y’know, we don’t get to do any shows. BUT, there are some bands out there who will be having an absolute nightmare! People that rely on touring! So, y’know, we really really feel for those bands right now…”

Let’s talk Cannibal – was the delayed release a good decision? “I’m in two minds, if I’m completely honest… The whole reason we pushed the album back, to clear the record, was purely because we don’t like releasing a record without being able to play a release show! For us, the whole point of releasing an album is so that you can tour again! So, when we put it back, we were advised by absolutely EVERYONE that we would all be out of lockdown by June! So, if we pushed it back, we could still do the release shows, still do the release hang-outs… So we made the decision ‘okay, cool, it’s for the best!’. When that turned out to not be the case, I think every single member of this band was like ‘I wish everyone already had the album’. Like, what is the point in waiting the three months if we are in the exact same situation? – But nobody could have ever predicted that! So, hindsight is 2020!”

While it may be unclear whether the September release shows will be possible, rest assured – Bury Tomorrow will be back in our lives as soon as humanly possible! “The SECOND that we’re told we’re allowed to play shows, you can almost guarantee we’re gonna play a show. Like, it doesn’t matter where it is, what it is… We don’t count anything out. If they said tomorrow that next weekend we could put on a show, we would organise something. Like, that’s where we are as a band. We just wanna play!”

So, what’s different about Cannibal in comparison to past Bury Tomorrow albums? “I think the main difference is that we felt comfortable as a band to allow Dan to explore the things he wanted to explore. This is a very personal record… On other albums we’ve always been a band that’s fully committed to the fans, so we tell other people’s stories, that’s kind of been our MO. But, on this record, Dan was just fully committed to telling HIS story. And I think it’s come out quite cathartic and very violent and very aggressive and just… overwhelmingly sad. And that’s important, to have that range in metal.”

And, boy, does this album have range! Cannibal handles its delivery of complex emotions brilliantly. “It’s quite an emotive thing to explore – when you’re so frustrated you can’t do anything… either cry or scream. I think that it’s a really important emotion to convey, particularly with the subject matter.” Even the artwork, an exposed skull, is deeply emotive; “it’s the basis of the album name: Cannibal. It’s about eating away at yourself, when you have thoughts that keep plaguing away at our mind… it’s also about THOSE people in your life, the ones that constantly bring you discomfort because their words and actions eat away at you.”

Despite the deeply raw lyrical content, Davyd insists the album is more cathartic than stewing in the past. “I mean, it didn’t concern me because I knew that Dan was being retrospective. I consider this album more like his journal, one that he’s re-discovered… I think that it was just the time to revisit that exceptionally hard place that he was in a couple of years ago… For him it’s super important that everyone talks about mental health, and so this was the first step.”

So what’s Davyd most excited for everyone to hear from the new album? “My personal favourite is Voice & Truth or Dark Infinite – I LOVE both of those tracks. They’re both very aggressive and emotive, like what we talked about. But, actually, one of the ones I’m most interested to play live is Quake!” (we take a moment to express how Quake is our own personal favourite off of the record) “and I’ve got a sneaking suspicion you won’t be the only one! I’ve said this for a long time – I think that Quake is going to become one of THOSE songs. I’m sure it’ll become a B.T. anthem even though it’s very, very different for us. I feel like it’s Cemetery on steroids!”

“It’s very cinematic,” Davyd goes on to muse over Quake, but we’re quick to assure him that the entire album is very much the same. This is due to the band’s growing confidence in their sound, as well as producer Dan Weller’s encouragement and new ideas. “He’s definitely brought a different layer to what we were able to do! We’ve always been a band that thinks ‘if you can’t do it live, don’t do it!’… Then, with Black Flame, he was like ‘well.. what about if you did it THIS way? So it WAS live?’. Now we are able to implement things like, for example, the link on Black Flame – the drums between the end of Overcast. It’s a way of opening up elements that were still live-driven! Things that we COULD play live that we previously hadn’t thought of. So that’s been really great for us!”

Though we hate to cut him off, the clock is ticking – we end on a gracious note. “Thank you to everyone who’s supported us! And thank you for letting us make this album! We’re really stoked for you guys to hear it… and hopefully you think the three months has been worth the wait!”

“See you in 2021!” We share a groan. It sure is looking that way – but at least this scorching album will provide a little bit of comfort in this no-show purgatory.

Cannibal is out on Friday. Pre-order here.