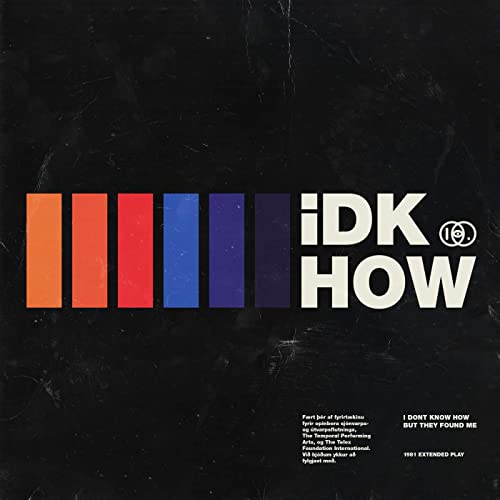 I Don’t Know How But They Found Me, 1981 Extended Play
Fearless Records

Whilst some may be sad over his recent departure from Panic! At The Disco, there are many who have been mourning the loss of Dallon Weekes’ own music since 2013. The Brobecks showed us just how charming Weekes could be; with his brilliantly raw writing and unique vocals, many were heartbroken when the project drew to a close. However, fear no longer: Weekes is once again showcasing his musical talents. Teaming up with Ryan Seaman, the pair are now the electronic duo I Don’t Know How But They Found Me and their 1981 Extended Play will remind you immediately of that golden Weekes charm.

There is a very evident Brobecks thread throughout this EP, never feeling too foreign from what you would expect from a Dallon Weekes creation. Even the Introduction reminds you that you’re in good hands, a parody of a children’s audiobook CD immediately putting a grin on your face. Choke only follows on from this sense of comfort, sounding very much like a song one would find on Violent Things: hearing angry lyrics lightly paired with bright piano and trumpets feels so delightfully familiar.

Social Climb is the biggest shift from the familiar, more towards synth-pop, with probably the most chilled out song on the EP. There’s something about this and the following track, Bleed Magic, that feels very Hoosiers-esque, due to the vocal performance. Bleed Magic is definitely one of the most fun songs here, Seaman’s drums never increasing in speed but constantly audible, keeping your head bopping along steadily throughout.

Not to ponder too much on Weekes’ past, but Absinthe definitely sounds like a song that could be on Vices and Virtues. The mention of ‘witches’ in the choruses may add to this vibe, but the sound in itself definitely screams Vices. Do It All The Time is a great closer, ending on a bassline that feels reminiscent of Nile Rogers mixed in with a sprinkling of Britpop, creating a song that just makes you want to move.

iDKHow describe themselves on their site as ‘a band out of time’ and this EP makes this tremendously clear. You can hear influences from all eras of music (and that’s even without the irresistibly Depeche Mode-esque single, Modern Day Cain, which is not included here). We don’t know how, but these guys have found a sound unlike anyone else around right now — and it’s fabulous.

1981 Extended Play is out now via Fearless Records.