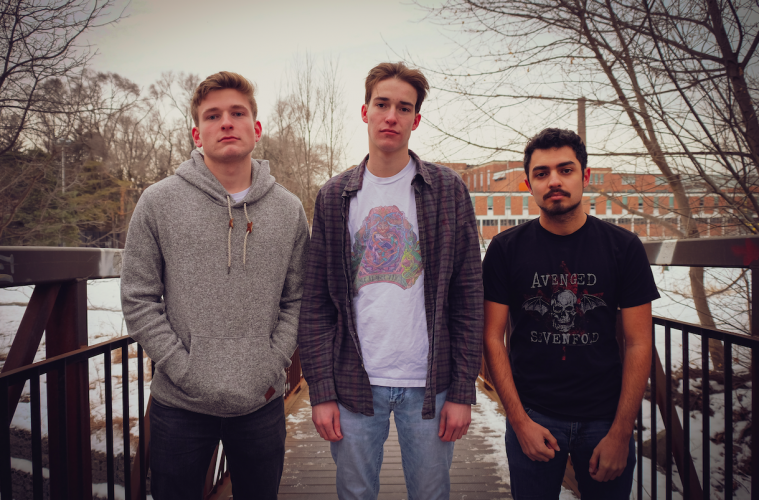 Here at Bittersweet, it’s our job to shout about bands we think deserve hype – and Toronto pop-punks Headway definitely fit that bracket. The quintessential pop-punk act, they bring the noise with cascading guitar swoops and instantly catchy vocals – you can picture yourself singing along in a crowd so vividly it’s unnerving. We’re so excited about Headway that their brand-new single Youth will be premiering right here on Bittersweet Press this Friday!! So keep your eyes peeled for that – but while you’re waiting with bated breath, we caught the band for a natter.

First thing’s first: who are Headway? “We’re a band from Toronto, Canada. Tim Lindsay and David Armiento split lead vocals and we’ve got David on guitar, Andrew Buzdon on bass, and Tim records drums for us in the studio.”

So now we’ve met the band, let’s get to the most exciting part: Youth is out in just days! In their words: “It’s probably best described as your classic upbeat, head-banging, pop punk tune with wailing guitar riffs and thought-provoking lyrics. The idea for the main theme of the song came from a conversation Tim had with a few friends about how life seems to move faster as you get older, and people start to expect you to have plans set out for your entire life. We wanted to write a song about growing up and how it’s okay to take things slow and to feel confused about the future. Youth is also about chasing your childhood dreams instead of settling for less, even if it takes some extra time to reach them.”

Putting together such a banger is a process most of us can hardly wrap our heads around, but for Headway it “usually starts with one of us just coming up with a riff or chord that we really like, plus some vocal melodies and lyrics. Youth started out as just a simple chord progression and set of vocals that Tim wrote, then David and Andrew started building on it with more complex guitar parts and bass licks. We really just wanted to write a fun pop-punk song for people to enjoy, while also including some commentary on societal expectations of growing up.”

As far as fun pop-punk songs go, the scene is jam-packed with iconic examples – Headway cite their beginnings as the formation of their genre. “We all grew up listening to pop-punk; some of the first bands we were introduced to as kids were Green Day, Sum 41, and Blink-182, so it just felt natural for us to have a pop-punk sound. Now we all have slightly different tastes, but pop-punk remains the common ground.”

Headway’s range of influences is comes from across a spectrum of rock and punk: “Since we all have differing tastes in music, our biggest influences are slightly different too. Among our biggest influences are Neck Deep, blink-182, NOFX, and Bad Religion.” An excellent range! And as a young band, Headway have big dreams too: “And as for dream collaborators: Neck Deep, The Story So Far, State Champs, Streetlight Manifesto, and You Me At Six.” Music to our ears, for sure.

Headway have already worked with some big names though, having recently played with Trapt, which they describe as “one of the best experiences we’ve had as a band so far. It was super cool to get to open for a band as big as they are, especially considering we had heard of them on the radio beforehand.” So what are the band shooting for next when it comes to supports? “Our dream support gigs are similar to our dream collaborators and depend on who you ask in the band, but if we had to pick one each they’d be Neck Deep, Anti-Flag, and Royal Blood. As you can probably tell, we’re pretty big ND fans.” Can’t blame you!! Hyped for the album, right!

It’s not all punk all the time though – Headway have got a great appreciation for artists at the top of their game in other genres. Fantasising about festival season, what’s their dream Reading and Leeds coheadliners? “It would probably look something like this: The 1975, Foo Fighters, Post Malone, Muse, Logic, System of a Down, Grayscale, Issues. Not sure how we’d be headlining amongst all these other insane artists, but I guess you never know.” Dream big, guys!

Keeping it a little more realistic for the moment, what’s coming up for Headway after Youth? “Releasing an EP is definitely something that we’re interested in, hopefully not too far down the road. Getting to write and put together a series of songs that tell a complete story has got to be one of the most fulfilling experiences as an artist. At the moment, we’re still pretty chill with taking things at our own pace and just releasing singles. It seems like they’re the way to go for smaller bands who are just making their start in the scene. If we think the timing’s right though, we’ll 100% write and record an EP.”

And it is indeed a strange, challenging time to be an artist. In the internet age, the release process has been disrupted, but Headway are optimistic. “There’s two ways to think about it: on one hand, reaching an audience is easier than ever now that we’re living in the age of the internet and social media. Releasing music has also become a lot easier; anyone can put their music on Spotify and Apple Music as long as they’re willing to pay a few dollars. But on the other hand, the ease of releasing new music also means that there are more tunes being put out every week than ever before. It’s a lot harder to catch the attention of a new listener when they can simply skip past your song and listen to thousands of other songs instead.”

And even more challenging to artists right now is the coronavirus outbreak, which of course we had to mention. “In Canada we’re on a lockdown of sorts. More than anything, life during coronavirus has been boring but we’re trying to stay optimistic. Lots of streaming and gaming for us right now.” And of course, we’ve got good tunes to get us through: “Right now we’ve been listening to the new Belmont EP, Brain Pain by Four Year Strong, and the new Fizzgigs album. They’ve been making the lockdown a little more tolerable.”

Headway are well aware that the streaming and gaming weeks will be having a big knock-on effect on their industry, though. “Many concerts and festivals have been cancelled or postponed, which will make it much more difficult for small bands to get exposure and a lot of artists will lose money. Recording and production of new music will also have to be delayed due to social distancing, so we’re glad that we were able to record Youth before this happened. Since we’re all still in school and exam season is coming up Headway isn’t hugely affected at the moment, but we had plans for summer that could get interrupted by the current situation. We were planning to hopefully record some new songs and play lots of shows so we’re hoping that this all ends soon.”

So what’s the outlook? “For Headway, we’re just hoping we can continue to release new music, play a bunch of shows in different cities, and continue to grow our fanbase. In regards to the world as a whole we’re just hoping that everyone stays safe, and that lockdown and social distancing measures start to cool off in time for everyone to enjoy at least a month or two of summer.”