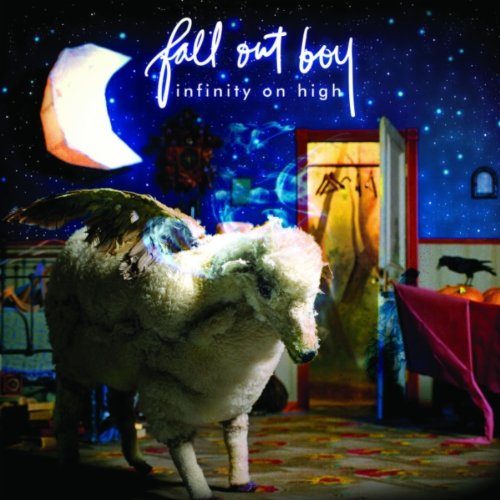 The most exhilarating string of words one can hear: ‘Welcome, it’s here’. Jay-Z was given the honour of uttering these three measly words, words that hold so much weight in our tiny car crash hearts; they signal the start of an era that ultimately cemented Fall Out Boy’s position as true emo legends. After overcoming the ‘sophomore slump’ with killer album From Under the Cork Tree, Infinity On High showed us that these boys from Chicago were not ones to crumble under the pressure, but instead thrive. It gave us anthems that could not be silenced, words that defined a generation. Just as self-assured as it is self-deprecating, Infinity On High is a glorious reminder of exactly why Fall Out Boy are loved by so many: they’re real.

Thriller immediately reminds you of the emotional journey this album takes you on, dedicating itself to ‘anybody who people said couldn’t make it’. It takes a jab at therapy’s lies, sarcastically mentioning how therapists are supposed to ‘fix [us] in 45’. This seemingly impossible task is taken on by Fall Out Boy: the album is itself around 45 minutes, suggesting that it hopes to help and be a more understanding place of refuge. Pete Wentz’s lyrics are drenched in metaphor, but still remarkably raw, making the listening experience feel like an exchange of dark emotions. The listener is in a safe place, able to reveal all and not feel judged.

Speaking of Wentz’s lyrical genius, it’s amazing how perfectly he is able to capture an emotion; Hum Hallelujah quite jokingly addresses this, telling us that Fall Out Boy can ‘write it better than you ever felt it’. This makes the listening experience immensely cathartic, allowing you to scream about how you feel through a thick veil of metaphor. Many critics have said that the lyrics are what lead to Fall Out Boy’s success, and this is undoubtedly a huge part of their appeal. The sorrow and the anger delivered through IOH’s songs is what gives them that extra punch, solidifying their place in rock history. The album is always there when you need it, but This Ain’t a Scene reminds us that IOH is ‘not a shoulder to cry on’ — Fall Out Boy don’t want listeners to wallow forever, but to capture their anger and transform it into a weapon.

Fall Out Boy proclaim that they’re ‘just off the key of reason’, and this can be seen by the unconventional feelings accepted openly within IOH. An air of narcissism surrounds the album, and this openness is what makes the tracks so powerful; by never hiding any emotions, even if they’re negative, the Chicago quartet are baring everything to the listener. The shameless narcissism in Fame < Infamy, Patrick Stump carelessly throwing out the idea that he’s ‘God’s gift’ and that he’s ‘alright in bed but [he’s] better with a pen’, makes it a song you want to belt out just as shamelessly. Every element of the song screams self-assurance, Andy Hurley’s driving drums and the rough chords churned out of the guitars throughout only emphasising the sassy, punching energy of the song.

There is definitely an irresistible energy throughout IOH. Thnks fr the Mmrs? You’d have to be six feet underground to not immediately feel your heart-rate spike at the violins signalling the start of this beast. Bang the Doldrums feels like you’re actually ‘racing through the city’, the sound carefree and summery. G.I.N.A.S.F.S holds that same energy, something you can feel in your chest that makes you want to grin and scream ‘cross my heart and hope to die, splinter from the headboard in my eye’. Fall Out Boy know exactly how to make us move, how to create a beat that will be echoing round our mind whether we like it or not.

IOH is also perfect example of how many styles Fall Out Boy can master. Songs like You’re Crashing, But You’re No Wave and Don’t You Know Who I Think I Am are tsunamis of sound, the guitars a true onslaught of noise, but the outfit are also more than capable of softer sounds. The (After) Life of the Party and Golden showcase this, as well as showing just how beautiful Stump’s vocals are. Golden in particular is entirely stripped-back, allowing Stump’s voice to positively shimmer. Every song lives in its own perfectly structured world, with its own unique energy, and somehow it is pulled off effortlessly.

Infinity on High is named after a quote by Van Gogh, a quote that Fall Out Boy want us to remember: ‘be clearly aware of the stars and infinity on high.’ Whilst the album has elements of sorrow, the overall message is to work past this and regain a positive perspective. It aims to encourage listeners to always look up at the stars, to remember that the possibilities in life are endless. It’s an angsty haven, a place to let off steam, before taking these lessons into the big, bad world — and this desire to fix the listener in 45 is just why this album is stitched firmly into so many people’s souls.