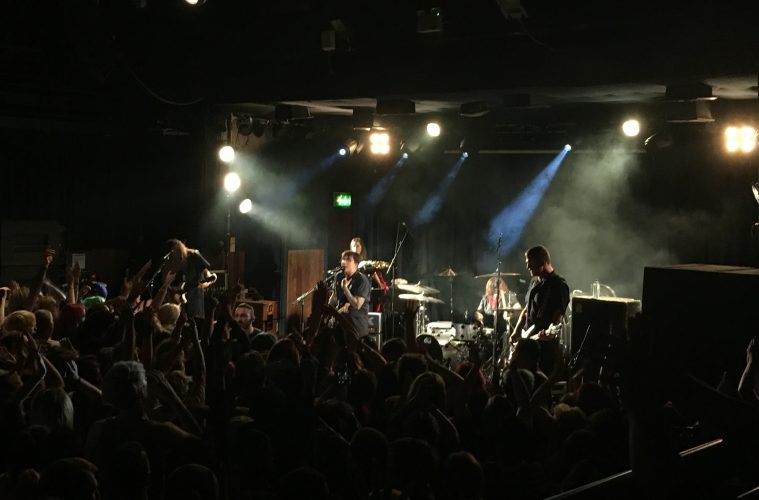 Surround yourself with good people: a good mantra to live by, and apparently an even better mantra for tour planning. Frank Iero, Laura Jane Grace, and their respective bands, take to the stage tonight at London’s Scala to prove it beyond doubt.

Opening up the evening is Canadian two-piece Mobina Galore, who certainly bring the noise – and there’s only two of them! Consisting of Jenna Priestner on guitar and vocals and Marcia Hanson on drums and vocals, they’re the epitome of a power duo: emo-punk riffs and a cool-but-excited stage presence, they totally command the attention of the building, which is already packed wall to wall!

The first of our headliners to take to the stage is Frank Iero and the Future Violents, and Iero’s years of performance experience only get more obvious with every new project he’s part of. He throws himself into the performance as hard as the floor writhing with die-hard fans throw themselves into every song, screaming and jumping along to fresh cuts off latest release Barriers as much as they do into older fan favourites .joyriding. and Dear Percocet, I Don’t Think We Should See Each Other Anymore. The crowd are at their very loudest, however, for a real treat from the archives – a cover of Iero’s song with his daughters, Best Friends Forever. The newly assembled Future Violents have been described by Iero as a kind of dream team – and they definitely are. The piano and string additions from Kayleigh Goldsworthy to tracks both new and old keep every second of the set really pushing its barriers (get it?).

Laura Jane Grace and the Devouring Mothers’ set follows, and the tangible love for the artists we’ve been feeling all evening not only continues but intensifies. She’s drawn a bit of an older crowd, but definitely not one with less energy! LJG’s stage presence is that of a seasoned and talented musician, but with a touch of modesty that allows her to build a chatty rapport with the crowd – her stories about Chicago, touring, and the meanings behind each song are almost as exciting as the songs themselves. She comments on how most musicians have to get years into their career before going on tour to perform their albums in full and how she’s lucky enough to do it already (though it’s a tongue-in-cheek comment, as she quips it’s because that’s the only way they could fill the set), but it’s definitely as much of a treat for us as it is for her. Our emotions are all over the shop as she and the Devouring Mothers tear through tracks that go from upbeat to acoustic, from boppy to almost harrowing in their honesty, but it’s the best possible way to round off an evening of brilliant music.

Frank and Laura’s sets complement each other brilliantly, ensuring that tonight’s been packed with fun crowds, humour, reams and reams of talent, but most importantly song after song that’s pure excellence. They’ve toured together before, and after tonight, we just hope they do it again soon!