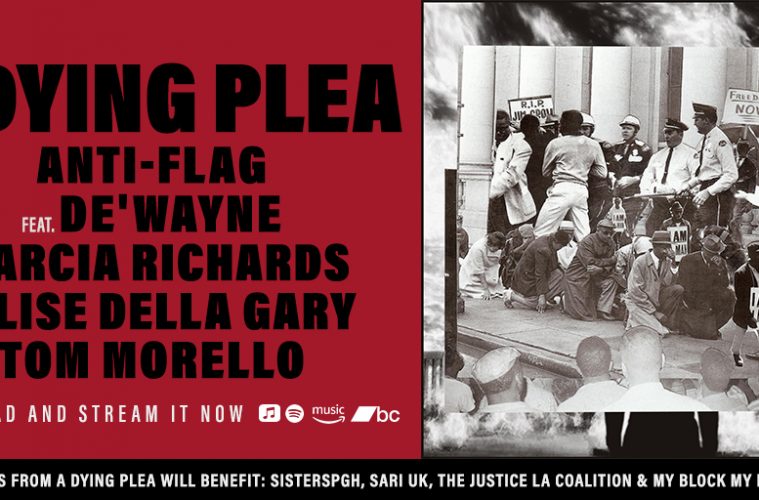 In the wake of the USA’s election day, it’s time to turn to our favourite political punks to keep the fight up. Fortunately, punk’s fiercest, most consistent commentators since the nineties have our back, with a freshly released deluxe edition of their already-scorching treatise to the horror of modern America 20/20 Vision: it’s Anti-Flag with 20/20 Division. And if that wasn’t enough, they’ve also just released A Dying Plea Vol. 1 which borrows De’Wayne, Marcia Richards of The Skints, Jálise Della Gary, and legend Tom Morello of Rage Against The Machine, to make an intensely vital protest song.

In classic Anti-Flag style, the album bonus tracks are vicious condemnations as much as they are calls to arms that remain ferociously optimistic. In particular, new album closer Fight Like Hell is an anthemic, uplifting ode to the battles left to be fought (and won), striking a match of love, hope, and community under the fire they’re already blazing against fascism, authoritarianism, and the Trump’s America that won’t just disappear no matter what the outcome of the election is. Anti-Flag stand ‘the test of time’ because they remain timely, essential, and driven to fight the same fight they started their band to fight.

As for A Dying Plea Vol. 1 – this is Anti-Flag and co. as current as we’ve ever heard them. Drawing on the musical stylings and brutal passion of the team they’ve assembled, Dying Plea absolutely cries out to be listened to. It’s sharp, scrappy, has moments of dreaminess and moments of terror – it’s the perfect song for right now (that said – Anti-Flag’s whole back catalogue also feels painfully resonant – The Press Corpse could have been written about @realDonaldTrump).