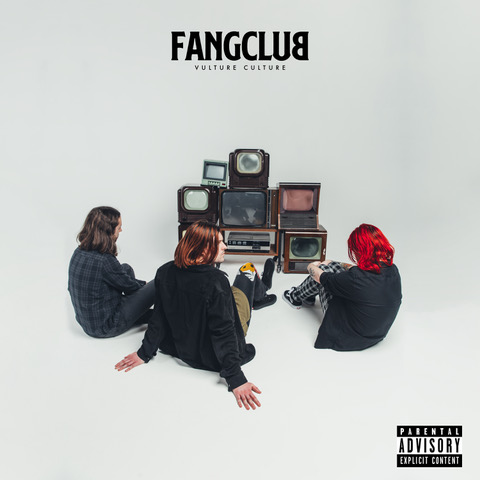 Following the success of their self-titled debut, Fangclub are back and ready to flood your mind with some spine-meltingly slick basslines. Sophomore album Vulture Culture shows a return to form, bringing us Fangclub’s signature grunge-meets-shoegaze sound, pleasantly familiar, but, in parts, not as adventurous as fans may have hoped.

Something that is immediately evident when listening to Vulture Culture is how Fangclub have refined their sound— the Irish grungers have amplified their shoegaze influence, the sound permeating every song on the album. In many ways, it makes the album feel more linear and well-rounded than their debut. First track Last Time is a true testament of the band’s growth, an amazingly produced, hypnotising chamber of sound; it sets the album off on a high, the song somehow physically affecting you, the sound taking it’s time, building up lethargically and dragging you away with it.

Following tracks mirror this slow, brooding nature, but somehow do not capture you in the same way. It’s as if starting off on such an impressive note was a shot in the foot: songs like Every Day, Black Rainbow and Hesitations pale in comparison, despite feeling impressively vast and space-y in and of themselves.

The more chilled vibe of the album also results in it not feeling as loud or light as the Irish trio’s debut; Fangclub feel a lot more like Philly shoegazers Nothing than the Pixies this time round. However, there are still some heavier and bouncy sounding tracks — Vulture Culture, with it’s simple lyrics and great hooks, is an immediate earworm, while Kingdumb sounds like it could be right off of a Nirvana record, guitarist Steven King’s parts nothing short of delicious.

One song that truly encapsulates all that Fangclub are, however, is Nightmare. It starts off with a Nirvana-esque guitar intro, before King delivers breezily cool vocals that could easily be found on a surf-punk track. The track highlights the trio’s grunge influence whilst also morphing it into something fresh and awfully catchy, having you singing along with King’s ‘we’re livin’ in a nightmare, baby’ after your first listen. The end is chaotic, albeit momentarily, feeling rather reminiscent of Muse’s Hyper Music, a tiny tease of chaos that leaves you begging for more.

Vulture Culture showcases a band that know what their sound is — perhaps to a fault. Though well-produced and musically consistent, it seems to lack that element of chaos that made debut so delightful. We just can’t wait to see how these tracks will translate onstage; these songs are sure to absolutely shine in a rawer, more raucous setting.

Vulture Culture is out now via Vertigo Records.