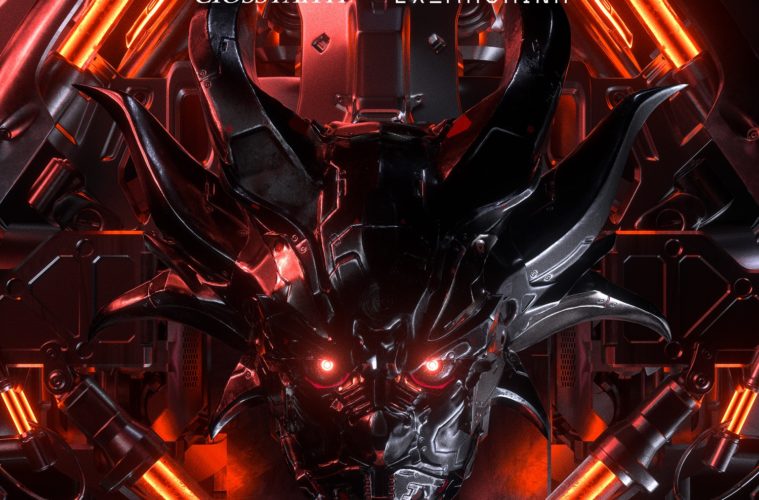 Meshing together genres can be tricky – if a band can’t master one side of their desired sound, the entire project collapses. Crossfaith, however, have cracked the code; the Japanese group are just as talented an electronic band as they are a metal band. With such an impressive back catalogue, it’s impossible to imagine the group upping their game… but new album EX_MACHINA is something else. Going above and beyond their previous work, Crossfaith’s latest brings us an even more epic sound than ever before.

Crossfaith albums tend to start with electronic tracks, and Deus Ex Machina is no different. With an energy The Prodigy would be envious of, the opening number immediately reminds you that Crossfaith do not mess around – despite being under two minutes, the track sucks you in entirely, mentally preparing you for the energetic tone of the what’s coming. The opener also features a monologue that lays out a story of angels and demons in the future – the album’s sci-fi concept really gives it a gritty edge and invests it with an epic sense of scale.

The Slipknot-esque Catastophe comes next and shows off us some of Kenta Koie’s glorious growls. One thing that must be said: Koie’s voice is incredibly refined – it’s almost too perfect. He’s got a growl that’s gritty and raw in just the right way, and it really adds to the overall feel of this album. The Perfect Nightmare further showcases Koie’s voice, a thunderous rumble of drums and growls throughout. The entire song feels a bit like a heart attack, every element of the song feeling like layer upon layer of adrenaline. There’s a frantic moment of drumming at 2:18 that lasts mere seconds but still leaves you breathless. The build-up of Koie repeating ‘I.. am… the perfect one… I… am… the Perfect Nightmare…’ is sure to be absolutely insane at live shows. If a wall of death isn’t opened during this song we’d be surprised (and very disappointed).

This album also welcomes some fabulous collaborations – one being with Ho99o9 on the track Destroy. The track proves Ho99o9 and Crossfaith to be an amazing pair, which is really no surprise considering the energy both groups rile up within their audiences. Ho99o9 have their own moment of singing and hardcore punk before they sing with Koie and the song then transforms back into a heavy metal track – but it feels incredibly natural. It’s testament to just how talented Crossfaith are when it comes to their genre-hopping, how confident they are in their sound.

One notable thing about the choice of collaborating with Ho99o9 is the fact that the American duo also seem to defy the notion of being a certain ‘genre’ – the group make hip-hop but also punk and hardcore. Crossfaith seem to appreciate other bands that walk the line between genres too; however, considering Ho99o9’s primary themes, it’s also clear that they love socially aware bands. With this in mind, the choice of Enter Shikari’s Rou Reynolds to feature on Freedom feels like an appropriate choice. Enter Shikari are also a lot more like Crossfaith in terms of sound – they’re like genre-confused brothers despite one being from Osaka and the other from St. Albans. The track feels like the best parts of the two outfits put into one song. Reynolds has an iconic moment of talk-singing, before Crossfaith infiltrate and amp up the speed (then amp up the speed some more!) before finally screaming out that, ‘they chase us THEY CHASE US!!!’. It’s a perfect collaboration and will really leave listeners with a desire to see more from the pairing.

In contrast, Make A Move feels more playful, and lighter with more singing that growling. It’s another example of the electro-dance tracks the group can churn out, and its robotic voice adds to the futuristic feel of the album. Lost In You is also lighter, but has a sadder tone. Oddly, the track feels like a toned-down Basshunter cut mixed in with the emotional delivery of Aerosmith. Wipeout is different again and undoubtedly one of the finest examples of metal and electro shaking hands on the album – it’s no surprise it was chosen as a single. The track has energy and then some, as well as having an incredibly spacey, huge sound, really adding to the sci-fi theme of the album. Instrumental track Twin Shadows also adds to this sci-fi feel, the solely electronic track feeling rather empty in comparison to the meaty music elsewhere. But its wistful, hypnotising simplicity is affecting.
The choice to close things down with a cover of Linkin Park’s Faint is a way of paying tribute to Chester Bennington, and it’s actually a very fitting end to the album. Members of Crossfaith were originally in a nu- metal covers band, and this is a return to the skeleton of what Crossfaith is at its core – raw, loud and experimental. It’s also simply a great version of a great song – featured artist Masato of Coldrain does an amazing job vocally.

Crossfaith’s sound is loud, vigorous and bold in a way that every metal band strives for. EX-MACHINA is, in the words of Linkin Park, an album that ‘won’t be ignored’ – there’s something about it that just demands to be heard. Make sure to listen as soon as possible.

Ex_Machina by Crossfaith is out through UNFD on Friday 3rd August